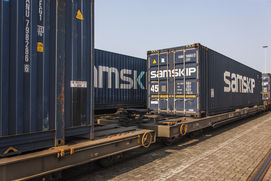 The existing article limits 44t combined transport loads in containers to units of 40ft in length.

Samskip, a multimodal operator with a large fleet of 45ft containers, said that the relaxation in weight restriction will enable its customers to transport 4t extra, in turn promoting growth of combined transport.

"The existing article limits 44t combined transport loads in containers to units of 40ft in length."

In the 2011 EC’s white paper ‘Roadmap to a Single European Transport Area – Towards a competitive and resource efficient transport system,’ the executive body stated its goal of reducing greenhouse gas emissions by nearly 60% by 2050, in comparison with 1990.

According to the EC, facilitating a modal shift from road to rail or waterways for distances longer than 300km by optimising the performance of multimodal logistics chains is one of the ways to achieve the goal.

Samskip offers a wide range of routing options, using road, rail, sea and inland waterways, and has over 13,000 containers, including 20ft and 45ft pallet-wide high cube containers including reefers, curtain-siders and flat-racks.