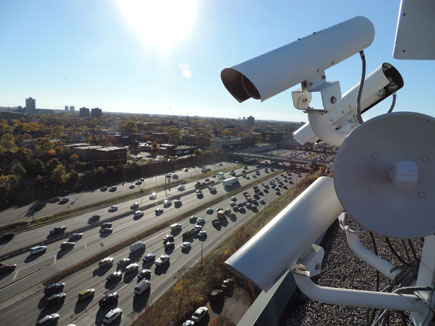 Researchers from the Minnesota Traffic Observatory (MTO) in the US have been working on setting up a testbed on Interstate-94 (I-94) to trial connected vehicle technologies.

"They will need a place where they can test them in a real environment."

The new test bed will serve as a permanent field lab for MTO, which is part of the University of Minnesota.

The permanent field lab comprises three rooftop locations, which have been equipped with machine-vision sensors and surveillance cameras.

"They will need a place where they can test them in a real environment."

The field lab tracks traffic flow on the accident-prone area of I-94 in Minneapolis. The area accounts for more than 100 collisions every year.

Most of the accidents that occur are rear-end crashes resulting from a failure to stop or very less headway.

The project aims at adding two major elements to the I-94 lab that includes high-resolution radar sensors and a communication system in the form of roadside units.

The radar sensors enable the researchers to gather vehicle trajectories, while the communication system helps to provide radio signals that are compatible with the short-range communications standard.

The researchers have been testing the sensors at different locations in order to evaluate the accuracy of the radar and to detect the speed of the vehicles.

The scope of the project includes conducting live field tests of the collision warning application, installation of additional sensors, and establishing a vehicle-to-infrastructure (V2I) version of the application.

Image: The new test bed is being set up on MTO’s permanent I-94 field lab. Photo: courtesy of University of Minnesota.