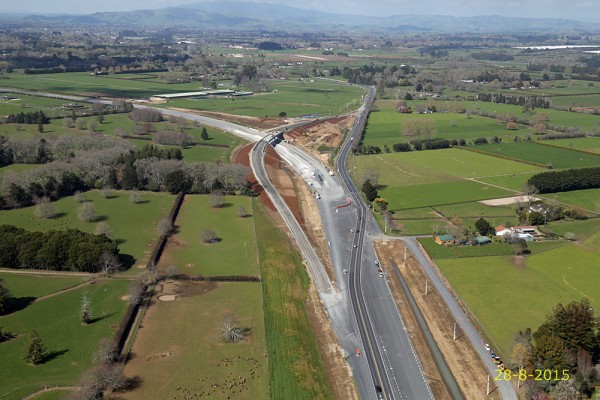 The New Zealand Transport Agency (NZTA) is set to open the first 4km of the $230m Cambridge section of the Waikato Expressway later this week.

The Northern Interchange Bridge will open to traffic for the first time on 18 September, taking State Highway 1 (SH 1) traffic up and over the expressway, whereas traffic heading towards Hamilton will travel on the northbound expressway lanes.

The opening signals completion of work on 4km of the Cambridge section, between the existing Tamahere Interchange and the Northern Interchange.

NZTA Hamilton highways manager Kaye Clark said: "Work is going well on the rest of the Cambridge section and weather dependent, the entire 15.2km length could be open in time for Christmas.

"The project team will have a clear picture in mid-October, when we hope to announce an opening date to the public."

"The project team will have a clear picture in mid-October, when we hope to announce an opening date to the public."

The new section is expected to open with one lane in each direction, while maintaining an initial 50km/h speed restriction to enable the chip seal to bed in.

Motorists will subsequently be able to travel at 80km/h on the section until the completion of the entire Cambridge section.

The Cambridge section is anticipated to lower journey times between Cambridge and Hamilton by approximately 5min and up to 10min during peak times, whilst also making this stretch of SH1 safer for all motorists.

The Waikato Expressway is one of seven roads of national significance identified by the government as key to unlocking the country’s potential for economic growth.

Upon completion, the Waikato Expressway will serve as the key transport corridor for the region, connecting Auckland to the agricultural and business centres of Waikato and Bay of Plenty.

Earlier this year, the agency board approved $1.08bn to fund construction of the Hamilton and Longswamp sections.

The approval indicates that all seven sections of the expressway will be built, under construction or ready to go out to tender by the end of this year.