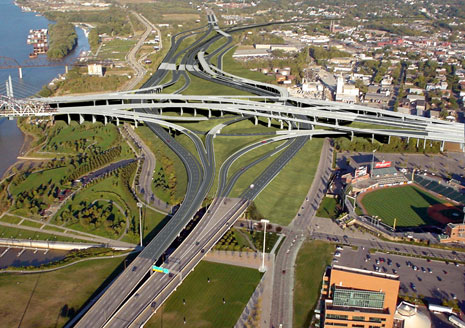 The US Federal Highway Administration (FHWA) has approved the construction of the $2.6bn Ohio River Bridges Project following a review of the environmental impact.

The six-year project is aimed at improving the safety of users and reducing traffic congestion on the bridge.

Kentucky and Indiana will together construct a new I-65 bridge over the Ohio River and reconstruct the I-64 / I-65 / I-71 Kennedy Interchange as a part of the project.

The two states will also build a new SR 265 East End facility, including the construction of a new bridge over the Ohio River and a tunnel to connect the I-265 Gene Snyder Freeway.

US Transportation Secretary, Ray LaHood, said this final step in the environmental review process allows Kentucky and Indiana to begin improving safety and easing congestion for thousands of people who travel across the Ohio River every day.

"This project will put people to work and help improve our infrastructure – a win-win for these two states," LaHood added.

The Kentucky Transportation Cabinet will be responsible for the downtown Louisville part of the project and build a new bridge with approaches, reconstruct the Kennedy Interchange where I-64, I-65 and I-71 converge, and upgrade the I-65 from 8-lanes to 12-lanes.

The Indiana Department of Transportation will construct the East End Crossing, spanning the river between Prospect in Kentucky and Utica in Indiana.

The project is expected to create over 4,000 construction, engineering and supply-related jobs.

FHWA Administrator, Victor Mendez, said: "This project will create jobs in the short term and set the stage for continued economic growth for years to come."

FHWA is an agency within the US Department of Transportation that supports state and local governments to design, construct and maintain the nation’s highway system and various federally and tribal-owned lands.

Image: Kennedy Interchange in Kentucky, US. Photo courtesy of: The Ohio River Bridges.