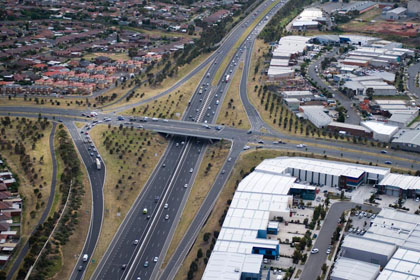 The Australian Government has awarded a A$62.5m ($66.8m) contract to Visionstream Australia to install an electronic freeway management system along the M80 ring road, one of the busiest routes in Melbourne.

Under the contract, Visionstream Australia will equip the M80 with technology that will help prevent congestion, while giving motorists better journey information.

Victorian Roads minister Terry Mulder said once fully in place, the system will use sensors built into the surface of the road to monitor the flow of traffic and prevent congestion by automatically reducing the number of vehicles entering the freeway via the on-ramps and varying the speed limits along it.

"Strategically placed electronic message boards will provide motorists with real time information on the traffic conditions which may lie ahead, not only along the M80 but also on key connecting roads," Mulder said.

"While the upgrade will deliver more traffic lanes, it is the electronic freeway management system which will make sure that over the longer term we get the most out of this multi-billion investment including fewer accidents and quicker, more reliability travel times."

"It’s all about getting the most out of the infrastructure we already have, which over time is a far smarter and cheaper option than simply building more and bigger roads," Albanese said.

"As well as being good for taxpayers, this technology will deliver faster, safer and less frustrating driving conditions for the 142,000 motorists and truck drivers who use this vital part of Melbourne’s road network every day."

The electronic freeway management system will be installed between the Princes Freeway and the Greensborough Highway.

It is part of the A$2.25bn ($2.4bn) M80 ring road upgrade, funded by $900m from the Australian Government and $300m by Victoria state government, with the remainder coming from future budgets.

The upgrade will improve the 38km Western and Metropolitan ring roads, from the Princes Freeway at Laverton North to the Greensborough Highway at Greensborough.

Image: The M80 ring road upgrade will improve the 38km Western and Metropolitan ring roads, from the Princes Freeway at Laverton North to the Greensborough Highway at Greensborough.Photo: courtesy of the state government of Victoria.