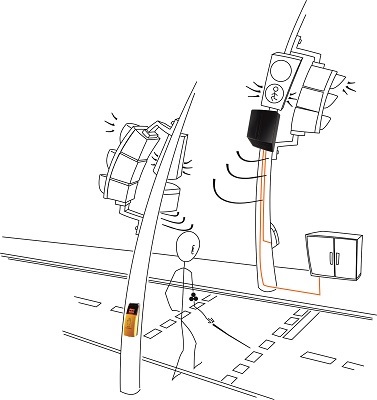 LOC-ID is the name of a Bluetooth-based system that can be applied very well at traffic light facilities or for dynamic passenger information. The user can choose between two different possibilities for the application: a ‘one-button device’ as the transmitter or an app that is installed on a smart phone and functions as a transmitter. When the user approaches a facility equipped with a receiver, he or she is recognised and an orientation signal with enhanced volume is triggered. The closer the user comes to the traffic light facility, the quieter the signal becomes until the user reaches the facility and the volume returns to its original level. The release phase is, as always, signaled by an acoustical release tone. Sometimes this phase is quite short. To make the crossing at the crosswalk safe despite this brevity, the orientation signal on the other side of the street efficiently guides the user across the street.

Among other locations, this technology is being applied in the city of Karlsruhe. To make street traffic safer, particularly for blind and low vision persons, the city has equipped several traffic light facilities with various systems. In a second step, organizations for blind and low vision persons and the advisory council for persons with handicaps were requested to give their expert opinions regarding the final selection of the system to be used. This exemplary process used by the municipality led to consistently convinced statements from those involved: in the future, RTB devices will be used in Karlsruhe.

During 21-22 June 2017, the PARKING trade fair will take place. As a recognised specialist in this field, RTB will demonstrate innovations in the areas of parking ticket terminals, monitoring individual parking spaces and traffic searching for parking spaces.