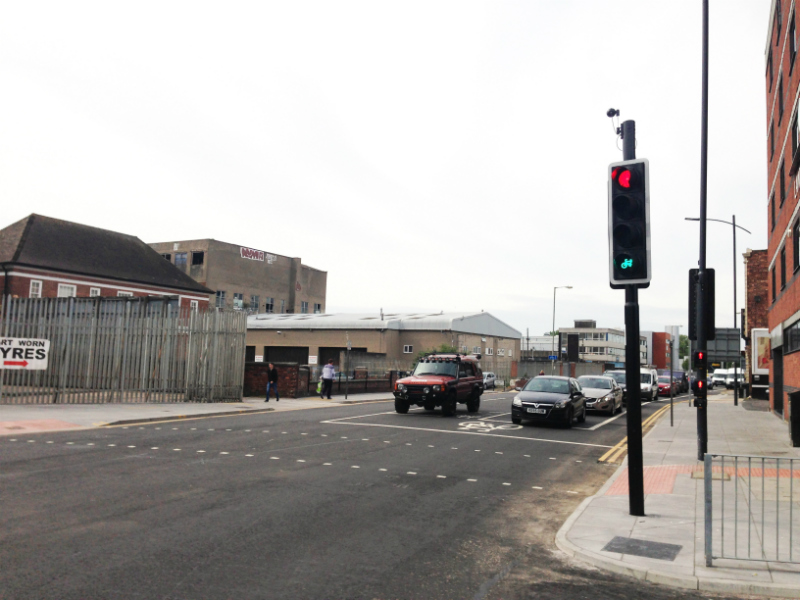 ThermiCam detects vehicles and cyclists in the darkest of nights, over a long range and in the most difficult weather conditions.
In an effort to promote a healthy lifestyle, the city of Liverpool wants to encourage people to leave the car at home more often and go cycling instead. But in order to make that happen, the streets of Liverpool need to become a lot safer for cyclists. Thermal traffic sensors from FLIR Systems already give cyclists a head start on two busy intersections.

If it is up to the Liverpool City Council, an extra 30,000 residents will be cycling in and around the city over the next few years. The City is keen to make cycling easier and more convenient in the city and says it will invest in the creation of a network of safe cycle routes, improvements in safety training and enforcement, and ensuring that cycling is included in council policies.

The city developed a scheme for Leeds Street, which links directly with The Strand, where the historic Waterfront and Three Graces are located. The scheme is funded by the Regional Growth Fund via the UK Department for Business, Innovation and Skills and includes road resurfacing, innovative traffic signals, LED street lighting, public realm regeneration, cycle and pedestrian facilities and capacity improvements.

On completion, the scheme will improve transport links, by removing pinch points at junctions. It will also increase the capacity of the Leeds Street route, which links North Liverpool with the city’s commercial district. The scheme was designed, project managed and constructed by Amey and built by local contractor King Construction.

Innovative traffic signals at the junctions with Vauxhall Road and Pall Mall now help cyclists beat traffic. A signal displaying a green bike comes on before the full green for other traffic, allowing cyclists a five-second head start on other vehicles. The signal expires when the full green light comes on. The signals are powered by FLIR ThermiCam sensors, which detect cyclists and distinguish them from other vehicles, meaning the advance lights are not used when there are no cyclists, avoiding delays to other road users.

"The two junctions on Leeds Street were designed to make cyclists more confident in our city traffic and at the same time, increase awareness with motorists about the presence of cyclists," says James Leeming, Senior Project Manager at the Liverpool City Council. "If cyclists coming from Vauxhall Road and Pall Mall want to cross Leeds Street, they have to effectively cross six lanes. In the previous traffic layout, cyclists had to cross the junction at the same time as traffic. For some cyclists, this is often not enough. Not to mention how dangerous it can be when big vehicles and cyclists cross the street together in a crowded traffic situation at pinch points."

"Leeds Street is a major strategic route into Liverpool so we certainly did not want to add an additional ‘cycle’ stage, on top of the normal traffic signal stages and increase waiting times for both cyclists and motor vehicles, creating frustration. Instead, we proposed a demand-based head start for cyclists without long intergreen periods that activated when cyclists arrived at the intersection so they also get the use of the following full green stage. To make this happen we needed reliable cycle detection. We knew FLIR Systems would be able to help us with that."

Both Vauxhall Road and Pall Mall now have one ThermiCam unit on both sides of Leeds Street. ThermiCam does not need light to operate, but uses the thermal energy emitted from vehicles and cyclists. This enables the sensor to detect vehicles and bikes in the darkest of nights, over a long range and in the most difficult weather conditions. In this case, the intelligent ThermiCam sensor is transmitting its cycle detection information to the traffic light controller and thus it allows for a more dynamic control of traffic lights.

This results in reduced vehicle idling time, improved traffic flow and improved safety and mobility for cyclists. ThermiCam not only detects cyclists at the stop line, but also within a more advanced distance from the stop line, so that the traffic signal can take into account the cycle presence sooner before the stage change point. This way, we can reduce the number of cyclists arriving at the stop line just after the stage change decision and missing out on the cycle stage, which would have been missed out because the demand wasn’t received soon enough.