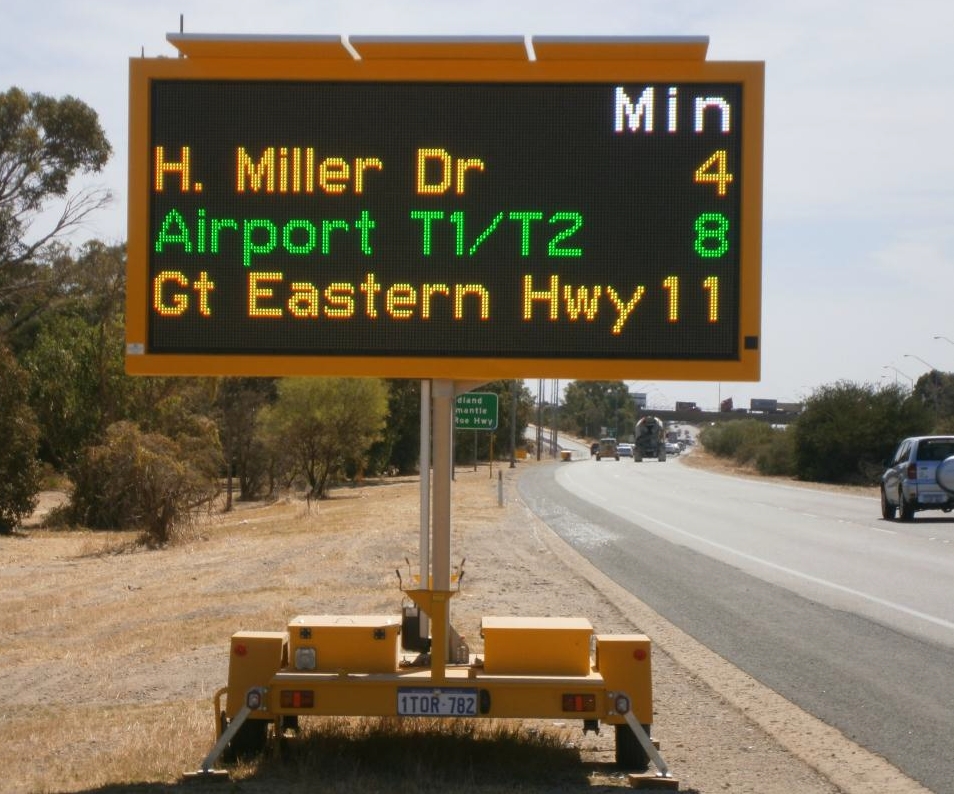 The pVMS is Australia’s first solar-powered full-colour portable VMS capable of displaying high-resolution images and graphics, as well as text.

According to ITS Australia, the ITS Master Plan provides a solid basis for Main Roads to grow its ITS Management & Operations businesses into the future. They also claim it is innovative in recognising and responding to the changing role of a state road authority, fostering collaboration with the private sector in a wider range of ITS than previously accommodated.

Our solar-powered mobile VMS solution has enabled the Gateway WA project to display current travel time information in locations where it was previously not available to road users. It has also kept the service running through the construction period when other technologies, such as inpavement detectors, can be difficult to maintain.

The integration of GPS Probe Data and the pVMS has proved to be effective in providing road users with near real-time traffic information, improving network reliability and congestion previously experienced on these key nodes.

Our custom-made VMS software solution communicates with the Intelematics Australia website to extract and rearrange data, with the output then being displayed on various pVMS signs. The pVMS is being used to minimise driver frustration by communicating real-time traffic conditions, which allow motorists to select alternative routes, and avoid delays.

The Gateway WA project is Western Australia’s largest road project to date. It is critical that traffic is carefully managed throughout its multi-stage construction, as it affects access to airport and freight depots, and important industrial and commercial hubs in the surrounding areas.

Our multi-purpose portable full-colour VMS has been used by various local government authorities and private companies as an effective tool for traffic management. It improves traffic information, thereby easing traffic congestion and promoting road safety anywhere and at any time.

As well as its informative and advisory purpose for road and highway use, the pVMS has successfully been used to reduce speeding in local areas and private roads. Its additional features include a high-speed camera, radar speed detection, and logging.

Our VMS trailer is also a great mobile platform for advertising and promoting businesses, products, events and special deals.

A record number of nominations were submitted for the 2015 ITS Australia National Awards programme, and we are delighted to have been shortlisted as one of three finalists for the Industry Awards category.

The ITS Australia National Awards programme is a celebration of excellence in the ITS industry. It is an opportunity to recognise professional ITS leaders, and help educate the government and the community about the benefits of ITS technologies.

This year, the ITS Australia National Awards will take place at the Sydney Opera House on 18 November.