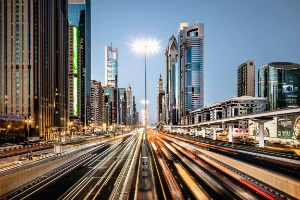 Over 50 new PoliScan systems enforce speeding, tailgating and other violations on the emirate’s arterial roads

The Dubai Traffic Police is modernising its enforcement on the arterial roads of the emirate, including the six-lane Sheikh Zayed Road. Over 50 new VITRONIC PoliScan LIDAR systems will replace the existing radar-based speed cameras. This technological upgrade significantly enhances the enforcement capabilities of the authorities.

In addition to simultaneous speed enforcement of multiple vehicles across all lanes, the police can now automatically document vehicles that are tailgating or driving on the shoulder, two major causes of serious accidents in the emirate.

The systems are also capable of detecting heavy goods vehicles that drive outside designated times or use lanes reserved for passenger cars as well as a range of other violations. The first twenty PoliScans have already been installed within four days, with the remaining replacements underway.

The PoliScan systems are nicknamed Al Burj (the tower) by motorists and media in Dubai and other emirates due to their distinctive sleek appearance. "It is rare to have a product that is so recognisable that people give it its own name," says Youssef El Hansali, CEO of VITRONIC Machine Vision Middle East. "This is the ultimate confirmation of VITRONIC’s philosophy to lead the industry not only in measuring technology but also in product design." VITRONIC was the first to introduce a pillared housing design to traffic enforcement in 2008.