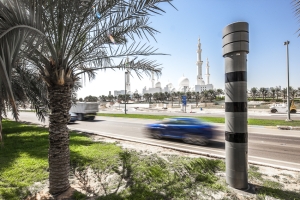 In Abu Dhabi, Dubai, Iraq, Qatar, Oman and Saudi Arabia, VITRONIC PoliScan systems are now an integral part of the urban landscape across the Gulf Region and are helping to reduce the number of serious road accidents. The German company’s regional presence in the Gulf is guaranteed by the 50-strong staff of its largest international subsidiary.

The service centres also ensure that all maintenance and calibration services for the almost 2,000 traffic monitoring systems installed in the region to date can be performed locally in accordance with German standards.

The success story in the Gulf began in 2008 when Youssef El Hansali, now CEO of VITRONIC Machine Vision Middle East, was sent to the region. The subsidiary was established the following year as a one-man operation based in a small apartment in Dubai.

"Right from the outset, the main focus was on customers and their traffic monitoring requirements," explains El Hansali.

"It is particularly important to understand the culture of the Gulf Region and to have a presence here as a local contact."

However, VITRONIC’s LIDAR-based traffic system also impressed customers in the region with its innovative technology and product quality. No competitors could offer systems capable of measuring across multiple lanes without in-road equipment. And none could produce comparable results in terms of capture rates and accuracy.

The trust that customers in the Gulf Region placed in the LIDAR technology and VITRONIC as a reliable partner quickly led to success. In 2010, VITRONIC Machine Vision Middle East delivered its first stationary and mobile PoliScan systems to Saudi Arabia. Major contracts from Oman, Iraq, Qatar, as well as Dubai and Abu Dhabi in the United Arab Emirates soon followed.

These established VITRONIC as the market leader in the region. Recently, VITRONIC was awarded a contract by the Abu Dhabi Police to create an automatic traffic monitoring system involving more than 500 PoliScan systems.

An ambitious road safety programme in the UAE also reduced the number of people killed in road traffic accidents by around two-thirds in less than four years. The aim is to eliminate all road traffic fatalities in the Emirates by 2030 (‘zero vision’).

"VITRONIC wants to continue helping the authorities to achieve this aim and to make the region’s roads safer," adds El Hansali.

In 2011, the Dubai Police named VITRONIC Machine Vision Middle East the best technology provider for its contribution to road safety. Additionally, in 2014, the force presented the VITRONIC subsidiary with the Gold Award, the highest accolade that can be awarded to a partner.