ViaTech develops and supplies road measurement equipment, including the ViaFriction all-electric computer-controlled friction device. This tool measures friction by braking one wheel independently of others on a vehicle.

ViaFriction was developed in 2006 using the experience that ViaTech gained through time spent working on RoAR friction meters.

The ViaFriction is a piece of continuous friction measuring equipment (CFME).

ViaFriction can measure friction using fixed slip (i.e. the skiddometer principle), and the longitudinal percentage can be set to anything from 1% to 85%. The fixed slip measurement then gives a continuous record of friction levels on the road.

ViaFriction can measure friction levels using variable slip. The slip percentage is quickly moved from 0% through to 85%, with the corresponding friction level being recorded. This gives the complete friction-slip curve for the pavement surface.

The ViaFriction consists of a friction measurement unit and a watering system. ViaFriction can be fitted on a trailer, together with a 1,000l tank, which allows for 30km of measurement.

ViaFriction can also be fitted on larger vehicles such as trucks, which allows for more water to be stored and longer stretches of measurement before a refill is required. Two ViaFriction units can be fitted on the same vehicle. This allows measurements in both wheel tracks, similar to split friction measurement.

Water is applied at vehicle speed, so will therefore not wash the road surface in front of the measure wheel.

More than 150 ViaFriction devices have been sold. Some even measure as many as 20,000km per year on uneven roads. The ViaFriction is made up of only a few parts, so is easily serviceable. The device also has a diagnostic system, pinpointing the parts that need to be serviced.

ViaFriction can be equipped with global navigation satillite systems (GNSS), high-speed cameras, temperature sensors (both road surface and air), and a texture scanner. The road-surface values are needed to determine values for the International Friction Index (IFI).

ViaFriction can also send live data and pictures through an attached camera to an internet server. The live data is placed on a map, and can then be monitored using a web browser.

ViaTech has many years’ experience in the development, manufacturing and maintenance of friction devices. ViaFriction is assembled and tested in ViaTech’s production facility. Software and development of the device is performed in-house.

Most of the ViaFriction units are serviced annually by ViaTech. ViaTech is also responsible for the control software, maintenance and support of the ROaR friction equipment in Norway and the Norwegian Oscar friction device.

One example of the most demanding infrastructure in terms of maintenance are the airports.

ViaTech is a Norwegian company with a comprehensive range of tailor-made products to measure different characteristics of pavement surfaces. 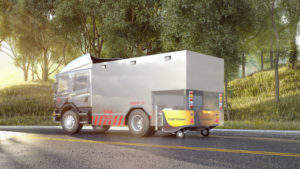 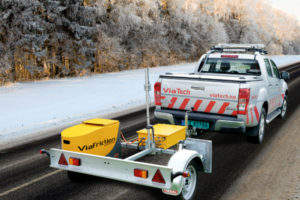 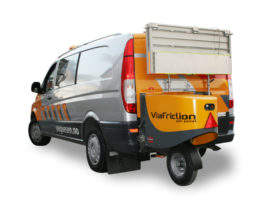 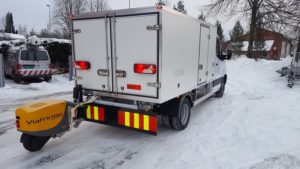 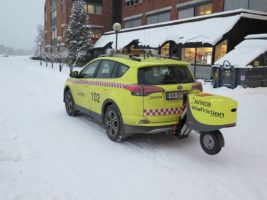 ViaTech is a Norwegian company with a comprehensive range of tailor-made products to measure different characteristics of pavement surfaces.

One example of the most demanding infrastructure in terms of maintenance are the airports.

Developed by ViaTech in collaboration with the Norwegian Public Road Administration, ViaFriction is a friction measurement device used as reference for continuously measuring the longitudinal friction on road and airports according to standards (ASTM E1551-08, ASTM F408-99, CEN TS 15901-2, CEN TS 15901-14).

ViaTech has signed a frame agreement with Avinor for delivery of ViaFriction to airports.

To take the safety up to next level, it is imperative to measure the friction in both wheel track all-year round. To cope with the demand, ViaTech has developed a new ViaFriction.

This summer, ViaTech made a special delivery to the Danish Road Directorate.

Viatech will be showcasing its products at this years Intertraffic Amsterdam, taking place between 5-8 April 2016.

ViaCal is a new software tool developed by ViaTech to ease the adjustment of A and B friction (skid) factors, and make them less time-consuming.