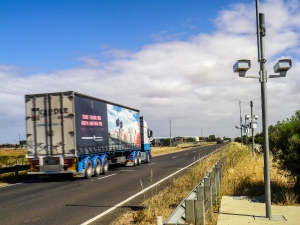 Two REDFLEXpoint-to-point cameras are now providing average speed enforcement on two major carriageways leading into the city of Adelaide; in both directions on the 13km-stretch of the two-lane Dukes Highway between Coonaplyn and Kiki, with a further two on a 51km-section of the Port Wakefield Road dual carriageway between Two Wells and Port Wakefield.

The cameras installed on Dukes Highway are unique in that not only do they monitor traffic in both directions on the two-lane road, but they are also configured to capture images of drivers who cross to the other side of the road in an effort to evade detection.

South Australia’s latest Road Traffic (Miscellaneous) Variation Regulations 2013, which took effect on 1 January 2014, classify the REDFLEXpoint-to-point cameras system, linked to and used in conjunction with an induction loop vehicle detector as the only approved average speed system, as well as defining changes to the legislation relating to the use of average speed cameras in the state.

In the last five years, a total of 29 people have died on the Dukes Highway and on Port Wakefield Road. Road safety minister Tony Piccolo stated that the speed safety cameras will help to reduce the average travel speed by promoting road length speed limit compliance.

"International research has shown a reduction of 50% in fatal and serious crashes after the average speed safety cameras were installed," Piccolo said.

A spokesman for South Australia’s Department of Planning, Transport and Infrastructure, Safer Vehicles and Technologies comments: "A big thank you to everyone in Redflex who has assisted us with the systems and through every stage of the project".