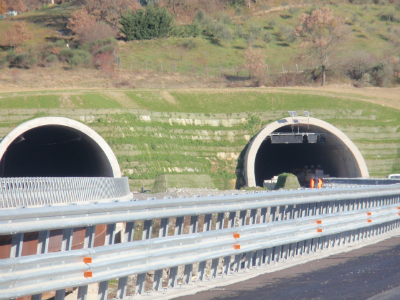 Capacity on part of Italy’s most important highway, the A1 Autostrada, has been greatly increased with a new section through the Apennines. Known as ‘Variante di Valico’, this strategic link features tunnels and viaducts for which geotechnical specialists Maccaferri proposed the use of its Green Terramesh® soil reinforcement.

The A1 Autostrada, known as Autostrada del Sole (Motorway of the Sun), runs for 750km from Milan to Naples, via Bologna, Florence and Rome. Not only is it the longest motorway in Italy, it is considered to be the key corridor in the country’s highway network.

Opened in December 2015 by Matteo Renzi, the Italian Prime Minister, this important new part of the A1 Autostrada will improve safety, and reduce congestion and journey times through the Apennines between Bologna and Florence.

Proposed in 2001, the Variante di Valico is a new 58km long ‘A1’ featuring 23 viaducts and 22 tunnels. Towards the southern end of this extension was ‘Lot 12’ between Poggiolino to Aglico. The 4.5km route was characterised by complex geological and topographical terrain and included three viaducts and five tunnels.

Some of the tunnel portals emerged into complex Apennine clay formations, exacerbated by the presence of active or dormant landslides. The tunnel portals had to be carefully designed and constructed to stabilise, retain and consolidate the ground and required monitoring inside and outside the tunnels.

The Buttoli tunnel typified these ground conditions. Buttoli features two parallel tunnels of 490m (North) and 546m (South) with an excavated area of 190 m². Each carriageway has a width of 11.95m per tube, thereby achieving three lanes (two running and 1 emergency) of 3.75m wide each.

Lot 12, Variante di Valico required considerable technical and organisational commitment to stabilise and retain the portals, maintaining the land-value and cultural area of Mugello. Maccaferri provided soil reinforcement solutions to this unstable ground around tunnel portals on the ‘Lot 12’ area of the works between Poggiolino and Aglio.

A benefit of Green Terramesh as a solution is that it forms flexible soil reinforcement structures that can accommodate differential settlement without compromising the structure, making it ideal under these complex geological conditions.

As all components are factory fitted, Green Terramesh is more rapid to install than other reinforced soil systems which meant the contractor could save time on the installation. No external shuttering or formwork is needed. The unit is erected, positioned and structural backfill is placed upon the integral geogrid tails, before compaction.

Good quality topsoil is placed immediately behind the front face to enable vegetation of the system. This satisfied the clients’ requirement to provide a green, vegetated finish to the steep slopes above and around the tunnel portals.

To ensure a long design life, the steel wire mesh is heavily galvanised and has a robust polymer coating essential in soil reinforcement structures.

The Green Terramesh solution was also used in Lot 12 at the Largnano tunnel in conjunction with gabions.