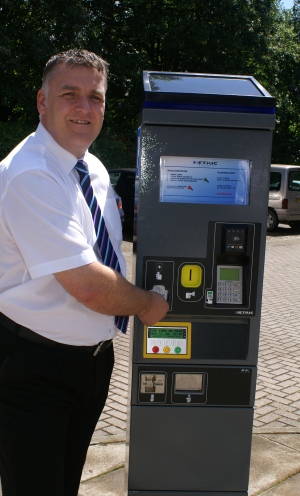 The UK’s only manufacturer of pay and display parking machines is strengthening its sales team.

Metric Parking has announced the appointment of Darren Butler, 45, to spearhead sales in the Midlands and the North of England.

His territory will include Lancashire, Yorkshire, Merseyside, Cheshire, Staffordshire, Nottinghamshire and Derbyshire.

Darren, who is Bolton born and bred, has considerable experience of the parking industry, having become a regional manager with APCOA in 2000.

After nine years with APCOA, he joined RCP in a similar capacity and for the last two years has been with Excel Parking.

He started as a contracts manager for the 2,300 capacity multi-storey car park for Media City UK, Salford, the new home for the BBC. He progressed to become regional manager which included looking after the car park.

Darren has personal experience of using Metric pay and display parking machines. "It is a branded product, which people know about and which I have used. So I feel confident I can recommend the product," he commented.

Earlier in his career Darren spent nine years as a policeman in Wigan.

He is married and his son James has just graduated in mathematics from Keele University, while daughter Kimberley graduated in geography from Salford University.