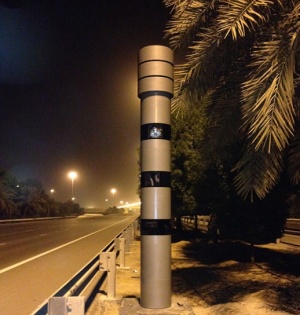 Dubai Traffic Police have completed tests comparing Vitronic Poliscan speed enforcement systems to standard radar systems on one of the city`s main roads. According to officials the LIDAR-based Vitronic systems came out six times more efficient than conventional technologies. The tests were part of a program to better enforce tailgating which has caused 22 deaths and 426 injuries in Dubai last year.

Dubai Traffic Police deputy director Brigadier Saif Muhair Al Mazroui said: "The speed camera was successful in hunting motorists who won’t leave enough distance on the roads, which is the major reason behind the traffic accidents in Dubai. There is plan to add more systems on the roads to cut the casualties."

To enforce tailgating offences Dubai Traffic Police intends to install 50 stationary Poliscan systems this year and another 100 in 2015. In addition to the tailgating offences, the systems nicknamed ‘supercam’ by Dubai media can also distinguish between vehicles of different sizes and vehicle with specific speed limits such as taxis.