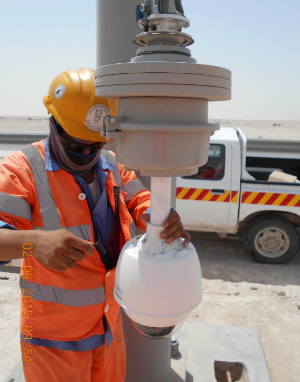 MG2 was recently in the Gulf State of Qatar to oversee the second installation of their innovative camera lowering devices.

Ashghal, the public works authority in Qatar, is in the middle of major improvements to the countries roadways and has specified the MG2 lowering device for use with the many cameras that will be installed on roadways throughout the country. This is the second installation and third project with lowering devices to date in Qatar. Currently, there are over 130 MG2 camera lowering devices in the country.

The installation coincides at a time when MG2 has shown a great desire to grow its visibility in the Gulf region. Previously, MG2 has had installations in Abu Dhabi and Saudi Arabia but in the last year and a half has made four separate trips to the Middle East. MG2 was present for the first two installations of lowering devices in Qatar and has also exhibited twice at the Gulf Traffic Exposition in Dubai.

It is no secret of the major infrastructure developments that are happening throughout the Gulf region and MG2 should be at the forefront of everyone’s minds when it comes to helping with their CCTV maintenance needs.
With the ever increasing population in the Gulf region and the increasing number of cars driving along roadways, there has never been a more pressing need for cameras along these roadways. The MG2 device makes maintaining these cameras safe, fast and more cost effective than traditional maintenance methods such as utilising cherry pickers with lane closures.