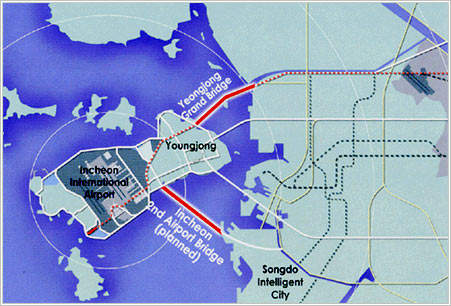 The Incheon Bridge will be a 12.3km (7.4m) toll bridge linking the Seoul–Incheon expressway with the Seohaean expressway. 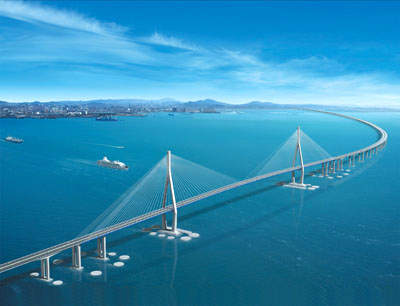 The most difficult part of the construction will be the cable-stayed bridge portion, lying over the main sea route in and out of Incheon Port. 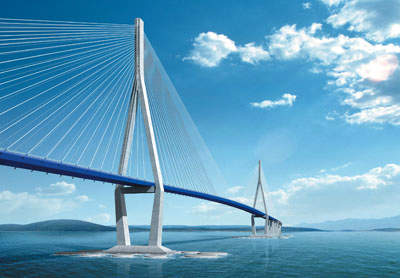 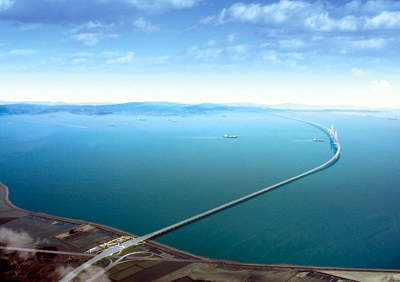 The Incheon Bridge will link the recently completed Incheon International Airport and the international business district of New Songdo City. 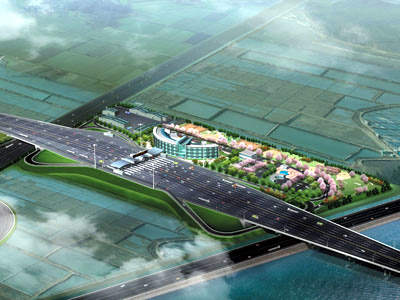 The 33.4m-wide bridge will support three lanes in each direction across the span and include manual and electronic toll booths on the island side.

The Incheon Bridge, which links the Incheon International Airport (based on Yongjing island) and the international business district of New Songdo City (second bridge crossing), started construction in June 2005.

The bridge was completed and inaugurated in October 2009. It is among the seven longest bridges of its kind in the world.

The bridge is a 12.3km (7.4m) toll bridge that links the Seoul-Incheon expressway with the Seohaean expressway, to shorten the journey time from Incheon airport to the metropolitan districts of Seoul by 40 minutes. The bridge was built at an estimated cost of more than $1.4bn (KRW1.25 trillion).

KODA Development, a joint venture between UK-based AMEC and the city of Incheon, financed and managed the project, while Samsung Joint Venture, a group of seven domestic builders, was in charge of the design and construction.

Buckland and Taylor Ltd were responsible for developing the basic bridge design, providing support to KODA in securing construction bids and providing technical due diligence services for the banks financing the project.

Other companies involved in the bridge insurance include the Korean Reinsurance Company and the direct insurers Samsung Fire and Marine, while the broker is Aon Ltd of London.

KODA Development will manage the bridge for 30 years and later return the facility to the Korean government. AMEC is the first foreign investor to lead a major public private partnership (PPP) project in South Korea and has an initial contract for seven years to operate and maintain the bridge in addition to a return on its investment. AMEC’s equity investment totals $38m (£21m), representing a 23% interest in KODA Development.

AMEC’s initial contribution has funded the initial design and building works on the bridge. The remaining equity and debt was provided by a consortium of Korean Banks led by Kookmin Bank and IBK of Korea, along with the Incheon Bridge Investment Company, which is owned by the Macquarie Bank of Australia (AU$86m) and will hold a 41% interest in KODA and debt of AU$354m.

The most difficult part of the construction is the cable-stayed bridge portion lying over the main sea route into and out of Incheon Port. The main span of the bridge measures 800m and the height of the main tower stands at 230.5m. The main bridge has a vertical clearance of 74m (242ft) and five span lengths of 80m, 260m, 800m, 260m and 80m.

The 33.4m wide bridge supports three lanes in each direction across the span and includes manual and electronic toll booths on the island side.

“AMEC’s initial contribution has funded the initial design and building works on the bridge.”

The foundations were drilled cast in place piles and the bridge pylons are Y-shaped concrete structures. The main bridge span is designed for the safe passage of shipping under the bridge.

Load-testing for the 3m drilled shafts for piling were completed to a standard of 210,000kN in February 2005.