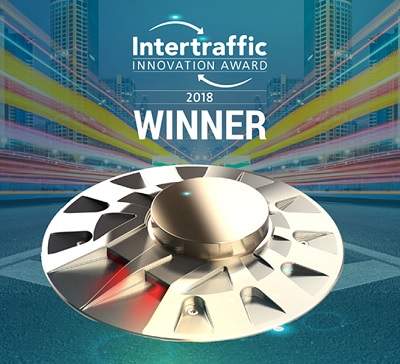 SERNIS is the only Portuguese company to win the world’s most prestigious Road Safety award and was the only company to have two products among the finalists – for its IMAPARK (Parking category) and SR-90 (Safety category) solutions.

The winners were announced at the opening ceremony of Intertraffic Amsterdam, the largest trade event in the world for infrastructure, traffic management, security, parking and smart mobility, which will take place from 20-23 March 2018 at the Amsterdam RAI.

System for installation on road pavements with dynamic elevation and LED lighting controlled as a function of speed. Consisting of speed sensor, controller and road studs, with the functionality of controlling the speed of vehicles in critical areas.

The system have several road studs to let the driver feels its presence on the road, and do not try to pass by – as occurs with road humps (often making them inefficient). Its elevation work in function of speed, becoming imperceptible below the speed limit and aggressive when the car is above the speed limit of that area. This control will be the result of an intelligent algorithm – function of the speed of the vehicles approaching the control zone.

The controller have the function of receiving the speed information of the detectors and transmitting the orders with respect to the height and color that they should have when passing the vehicle.

SR-90 – the new road stud – will have two types of warning for the driver: it will raise height above ground and illuminates depending on the speed of approaching vehicles.

There will be several levels of warning:

The focus of this research was the process that allowed the elevation of the road stud, maintaining all the mechanical characteristics inherent to its proper functioning.
This system will be installed in places where it is crucial that cars slow down when they pass. Close to schools and in areas with a high average of accidents caused by excessive speeds.

The technique inherent in the project is unique in the world. In fact, there is no speed-controlled dynamic system associated with road studs. The major challenge lies in the design of the mechanical system for lifting the main body of the road stud, because we developed a system that is resistant to the high impact caused by the vehicles and also can operate at voltages and currents from solar electric power stations.