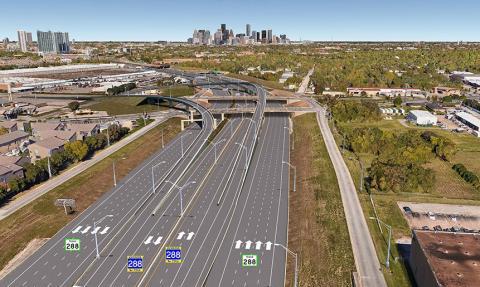 Blueridge Tolling Company (BTC) has awarded SICE with the design, procurement, implementation and commissioning of the ITS systems, tolling systems and network communication including the Developer TMC. In the scope of the project is also included the operational back office for the tolling system and interoperability with other external agencies.

The SH 288 Toll Lanes Project consists on a 10.3-mile highway in Houston, where new two express lanes will be constructed in the median for Northbound and Southbound. In the project is also included the reconstruction of IH 610 and Beltway 8 connectors with SH288.

The SH 288 expansion will include three major interchanges:

The SH288 project consists of 11 electronic toll collection points along the 10.3 miles and ITS systems as DMS, CCTV, MVDS, 80 sensors for vehicle detection, 30 Bluetooth equipment to calculate traveling times, ten variable message panels and 11 toll rate signs. This equipment will manage the General and Manage Lanes, including the Interchanges at Beltway8 and IH610.