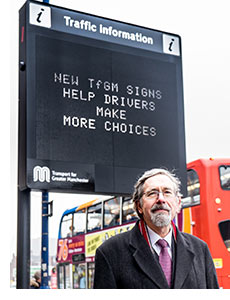 A total of eight variable messaging signs (VMS) have become operational on roads across the UK region of Greater Manchester.

By the end of March, a further 19 signs are expected to be completely operational in the region.

With the capability to display both text and graphics, such as standard road sign symbols, the signs are linked directly to the urban traffic control room at Transport for Greater Manchester’s headquarters.

The signs are aimed at developing the system using the link and allow it to provide information such as live diversions, comparisons between public transport journey times and cycling data.

All road users will also get an informed choice to meet their travel needs with the signs that are also able to display photographs and live stream footage, which will futureproof them upon change in current legislation.

"We are determined to see continuing improvement in road safety across Greater Manchester’s roads."

Each sign is said to be located properly close to a key decision point, such as the intersection of a main route, a park and ride site, a major train station, an interchange or a Metrolink stop.

Transport for Greater Manchester consulted with local authorities to select the locations by considering account factors such as speed limits and distances from the decision points.

Transport for Greater Manchester Committee chair Councillor Andrew Fender said: "We are determined to see continuing improvement in road safety across Greater Manchester’s roads and, in the short-term, this strategically located signage network will allow drivers to make safer and more informed driving choices while on the move.

"However, the system’s link to the region’s traffic ‘nerve centre’ opens up the potential for a number of exciting developments to this system, which we will look at developing as road users familiarise themselves with the signs."