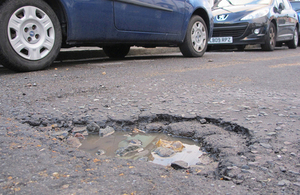 The UK Government has announced £6bn of funding to help tackle potholes and improve local roads between 2015 and 2021.

The investment amounts to £976m per year, which would be used to fix around 18 million potholes across the country.

"Poorly maintained local roads, blighted by potholes, are a menace to all road users."

"It is vital we have good quality roads. This government has already taken strong action by spending £1bn more on local roads maintenance than was spent in the previous parliament."

Expected to end short-term fixes, the latest funding will increase committed investment to £10bn between 2010 and 2021.

Approximately £4.7bn of the total investment will be shared between 115 councils. A further £575m will be made available through a new challenge fund used to repair and maintain local highway infrastructure such as junctions, bridges and street lighting.

McLoughlin also announced that £578m has been set aside for an incentive fund scheme, expected to begin in 2016.

Mouchel Infrastructure Services director of public services and advocate for the highways maintenance efficiency programme Matthew Lugg said: "Councils who think about long term planning and how they work together to share their resources, achieve greater economies of scale and keep the road surface in good repair, ensuring value for money for the taxpayer. Today’s announcement by the government will help to deliver this."