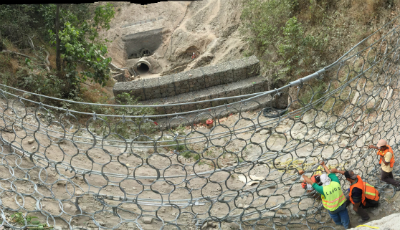 When hurricanes Ingrid and Manuel hit the Mexican states of Guerrero and Oaxaca in September 2013, they caused widespread damage.

The tropical cyclones were the first since 1958 to strike Mexico within a 24hr period and they battered the country, one on its east and another on its west coast.

The weather crisis that ensued led to flooding in towns and cities, which included the closure of the main Del Sol Highway. The highway stretches for more than 150 miles between Mexico City and Acapulco, and cuts through the rugged countryside of the southern highlands, reducing the commute from eight hours to just under four.

Torrential rains led to saturated soil, blocked watercourses and fast-flowing floodwaters which cut through the highways and set off landslides causing damage to infrastructure in these states.

Contractors brought in geotechnical specialists Maccaferri to install debris flow barriers to solve and contain the problem, which left unchecked, would lead to significant destruction.

A total of more than 400m² in five separate flexible debris flow barriers were installed in the affected area. The barriers were customised to suit the dimensions of the project, the anticipated debris material and the expected volume of the flow. Their design purpose is to reduce damage after impact and provide a tailored solution in challenging cases.

Upon impact by the debris flow, the barrier progressively deforms with the compression brakes and systems absorbing the energy. The hydrostatic pressure within the flow rapidly dissipates once the debris flow has been arrested, leaving the volume of debris within the barrier.

Geotechnical specialists Maccaferri, conceived a barrier with a combination of different diameter ring nets that are used as a containment mesh.

The hydrostatic pressure within the flow rapidly dissipates once the debris flow has been arrested, leaving the volume of debris within the barrier.

According to Maccaferri, their debris flow barriers offer strength and performance without the aesthetic intrusion of other debris flow systems.

The barriers are normally designed to be in place until vegetation is re-established on the vulnerable slopes above. If climate change and other factors threaten an increase in risk from debris flow in the future, the barriers can be reinstalled.