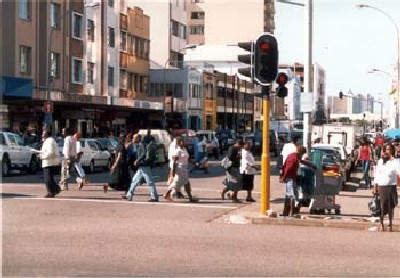 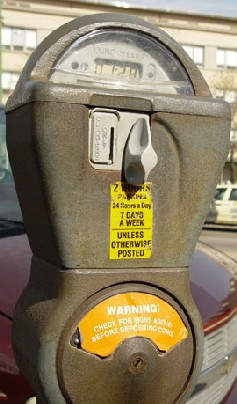 The old parking meter system was open to abuse and cost too much to run. 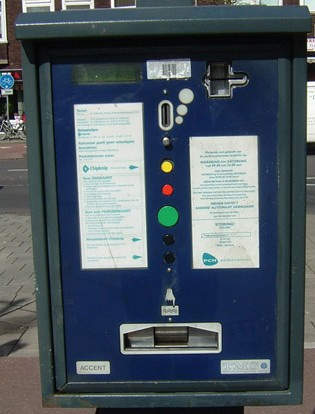 The new machines are efficient, run on solar power and generate much more revenue. 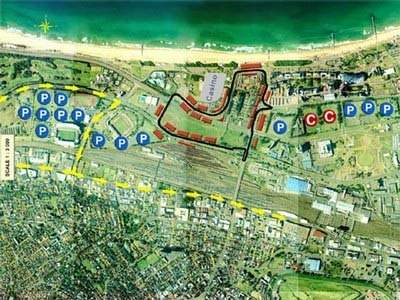 This shows the extent of Durban and where car parks are situated to alleviate the strain on street parking. 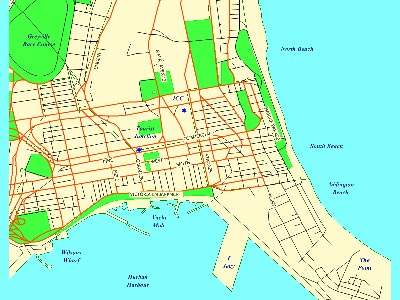 Map of Durban showing the CBD. In the future the parking scheme may well be extended to the rest of the city.

In November 2005, roll out was started of a new innovative, efficient, user-friendly pay-and-display system for the Durban Central Business District (CBD) was started. The system used pay-and-display machines in an attempt to alleviate congestion in the CBD.
The new system was introduced by the eThekwini Municipality in conjunction with the Metropolitan Police and the Municipal Transport Authority.

The service provider for the system was Emtateni Logistics in conjunction with Blick Security of the UK, which consulted widely in Europe for the correct system to introduce and was awarded a five-year R30m contract to install and manage the new parking
system.

Systems similar to the one intended for Durban have proved successful throughout the UK and in Europe in recent years, and have resolved major city parking problems. The Durban CBD now has 375 new pay-and-display machines, which replaced the older,
outdated parking meters. These units were designed to be solar powered, environmentally friendly, space-efficient and sturdy.

The system went into operation in January 2006 and was immediately considered a failure, according to local press reports. This was due to a combination of the public not being used to the system and the system not being quite ready for use. It was also discovered the system did not give change. The eThekwini Municipality responded by employing 150 professionally trained parking ambassadors to assist motorists.

To ensure the safety of motorists and their vehicles, the parking ambassadors were in constant radio contact with the city’s law enforcement officers and were able to give out fines for parking transgression. The new system is now expected to
generate around R11.3m more in revenues over a five-year period than the previous parking meter system.

Parking may be purchased on an hourly basis throughout the city for R3.80 per hour. The motorist may not park in the same bay for more than two hours. Receipt tickets are then displayed on the vehicle’s dashboard as proof of payment.

The parking ambassadors ensure that motorists do not remain illegally parked and are responsible for addressing all stationary-parking violations. They are supported by technical and support staff to enforce and streamline the process of paying
fines in a more user-friendly and technically sophisticated manner than previously.

The new system removed the need for ‘car guards’ who previously were paid by the parking public to stay by their cars and feed the meter during the duration of their stay.

The car guards were not completely put out of business by the new system and this prompted the Ethekwini municipal authorities to increase fines for certain transgressions in September 2006. The Metro Police had complained that there had been an increase in the number of private vehicles parked in loading zones (to avoid paying the parking fee) causing trucks to double park and obstruct traffic.

Motorists also complained that the parking meters do not give change and this is why using a car guard is cheaper. To address this, Emtateni Logistics consulted with the Traffic and Transport Departments to modify the system to give motorists parking time in line with the amount they have paid into the meter. One advantage is that any of the coupons issued from pay and display machines in the CBD are valid for all of the bays in the zone. Therefore, if a parking meter is defective, the driver can purchase a ticket from the next machine along to endure their car is not towed.

A dedicated client information line is available to the public and the details are displayed on the parking machines. In case of problems the motorist can ask for help from the helpline or the parking ambassador. Teething troubles have been rectified and it is now just a case of educating the public on how to use the new system.

The council approved a proposal for the system in 2002, after revenue from traffic fines plunged from R116m to R80m a year. Fines generated from expired parking meters had plummeted, largely due to the fact that car guards were feeding expired meters,
and the fact that many meters simply weren’t working. In March 2005 the council called for tenders to replace Durban’s inefficient parking meter system.

The initial contract was just for the city centre, but indications are that, if deemed successful, the system will be rolled out throughout the city. Out of eight bidders, Emtateni Logistics was recommended for acceptance.

Two of the failed bidders, Universal Parking Administration (UPA) and Kerbside Parking, lodged a complaint with the council and with the municipality’s in-house ombudsman, citing irregularities and inconsistencies in the tender adjudication
process. UPA lodged an appeal and threatened court action but it failed to secure sufficient evidence to support its case. In mid-2006 the case had fizzled out and no more has been heard.

Prince Sifiso Zulu, owner of the company which won the contract for the parking meters, was arrest in June 2008 after it was alleged he was driving a BMW X5 that was involved in an accident in Durban in March 2008. Two people died of injuries sustained in the accident. He denies being the driver at the time of the accident.