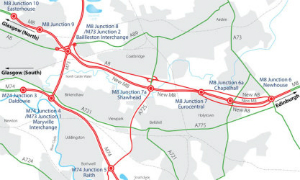 Maccaferri is supplying £300k materials to a major roadwork improvement scheme in Scotland.

The M8 M73 M74 Motorway Improvements project will complete the Central Scotland motorway network, following the successful delivery of the M80 Stepps to Haggs motorway and the M74 Completion project.

Benefits will include less congestion and safer, quicker journeys.

Work is now underway to upgrade the core of Scotland’s motorway network, which will boost Scotland’s economy by improving connections between the commercial centres of Glasgow and Edinburgh and beyond.

This upgrade will reduce journey times, cut down congestion, and improve road safety through the reduction of traffic on local roads, reduced lane changing and the prevention of weaving between lanes.

The procurement process, announced in December 2011, was tendered throughout 2013. The successful bidder, Scottish Roads Partnership (SRP), a consortium with a construction joint venture of Ferrovial Agroman and Lagan, was announced in February 2014, and Maccaferri was awarded the contract by the joint venture for all reinforcing systems required on the project.

This construction of over 5,000m² of reinforced soil slopes, with walls reaching up to 15m high, will be completed with Maccaferri’s Green Terramesh, which is a soil reinforcement system combining double twist, hexagonal, steel mesh geogrid with a rapid-to-install fascia. The fascia, consisting of a rectangular steel frame, supports biodegradable matting used to create slopes at angles of up to 70°.

Paragrid, another Maccaferri product, is to be used in conjunction with the Green Terramesh. ParaGrid geogrids are geosynthetic strips comprising of a core of high tenacity polyester tendons encased in a polyethylene sheath. This tough polyethylene sheath is resistance to physical, chemical and biological conditions found in reinforced soil structures.

Both systems are amongst the most tried and tested in the world, offering 120-year design life and high performance. This system also has positive environmental advantages in that it can reuse the site-won material, thus eliminating the need for dumping at landfills.

Natural vegetation will adopt the system or to control the variety of plant growth the system can be seeded with grass or wildflowers at the installation phase guaranteeing a quick, lush vegetative cover.

This project, utilizing £300K of Maccaferri material, is still ongoing, and is expected to be completed during 2016.