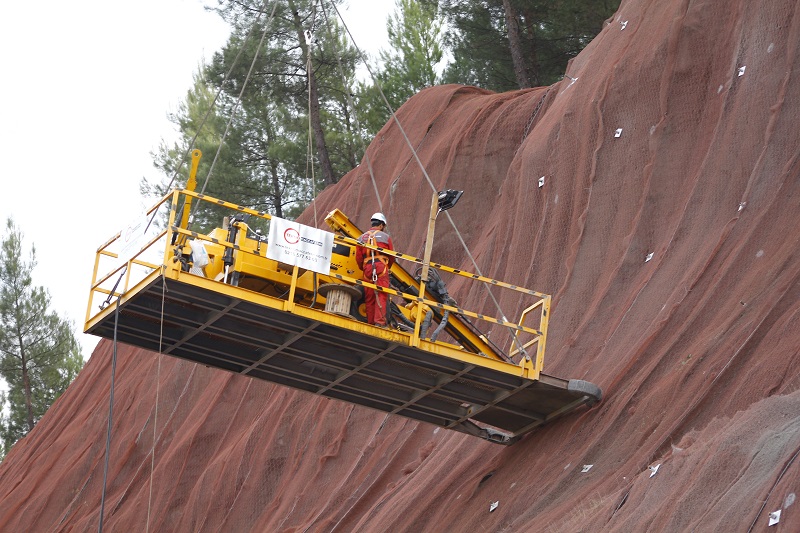 An important Turkish trade route between Amasra on the coast and central Anatolia was subject to slope erosion which was causing large scale rockfall problems to the highways near the town of Karabük. Tekno Maccaferri provided a solution to protect commuters and infrastructure by supplying our high-strength geomat MacMat® HS system, secured over the vulnerable slope face to prevent surface erosion.

The Turkish town of Karabük is situated on an important commuter route between Amasra on the coast and central Anatolia. The Karabük – Eskipazar 4 Hd. Road between Km 6+470-6+720 (right) and Km 7+510-7+660 (right) road, falls under the responsibility of the 15th Regional Directorate of Highways.

Medium and large-scale rockfalls had occurred due to surface erosion of the slopes, which consist of weathered limestone with claystone-marl intercalations, over an area of approximately 20,000m².

Surface erosion by stormwater run-off causes the clayey marl levels to wash-out, leaving the limestone layers to be exposed. On occasion, these exposed limestone rocks would break off and fall down the slopes and onto the road endangering commuters and damaging infrastructure. An existing stone wall barrier had been damaged by rock falls and was not able to provide the level of protection required.

We were approached by the contractor, ISA Yilmaz Inşaat Taah to provide a solution to reduce the hazard caused by these rockfalls, caused by surface degradation and wash-out.

Following site inspections and design calculations, our high strength geomat, MacMat® HS was selected. The geomat is used for demanding slope face stabilization applications which require a combination of erosion protection and high-strength surface stabilization. MacMat® HS offers an ‘all-in-one’ approach, which solves the two problems within one mat, reducing the installation time. It consists of a 3D polymer matrix extruded onto a high-tensile steel cable reinforced mesh with a tensile strength of 73kN/m. Once secured to the vulnerable slope face, the thick polymer filament matrix prevents surface erosion run-off, and the high-tensile steel cables and wire mesh prevent rocks detaching from the face. Soils are contained within the 3D matrix, which also assists the establishment of vegetation on the slope.

The high tensile steel cables are integral within the double twist steel wire, at 1m centres. The MacMat® HS was secured to the slope face by 4m long rock bolts on a 3m x 3m grid. Due to the anticipated loads, additional high-tensile steel cables (8mm diameter) were installed diagonally between the bolt heads. To determine the bolt length and punch-resistance of the mesh, surficial protection analyses were performed on the slopes separately using our MACRO1 software.