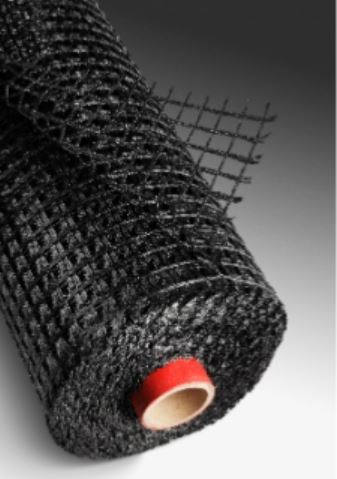 The use of geosynthetics in asphalt overlays has gained widespread acceptance since their introduction more than 50 years ago. Products of varying types have been used to either reinforce asphalt or to provide a relatively impermeable interlayer, thereby improving the long-term performance of the pavement.

In general, reflective cracking of asphalt concrete is caused by environmental effects, especially by temperature and repeated loading. These cracks can be divided into four basic types: reflective cracks, lateral cracks, longitudinal cracks and mosaic cracks.

D. E. Beck describes the first attempts of transport engineers to improve the surface properties of overlays by laying woven textiles between individual layers of liquid asphalt, which took place in South Carolina (US) in the 1930s. In the 1950s, metal grids providing promising protection against the propagation of cracks and wheel tracking were developed. However, these products were difficult to install because of their very rigid structure. S. F. Brown and M. Brunton proved that the process of milling and subsequent recycling is very complicated. A major development took place in the 1960s with the introduction of geotextiles. These materials were resistant to water and chemical reactions in the asphalt structure. It was proven that non-woven geotextiles provide an added value in the form of stress relief and water impermeability; most research studies concluded that they are unable to prevent crack propagation. The first use of geogrids able to address this issue dates back to the early 1980s. Rigid drawn biaxial polypropylene geogrid with open structure developed in the United Kingdom was intensively tested in many in-situ applications as well as by the University of Nottingham. The results have shown that geogrids are able to reduce deformations by up to 70% and significantly slow the propagation of reflective cracks. Another popular innovation in this field was the introduction of glass fibers as the main component of the reinforcement grid. Glass fibers provide the grid with high rigidity and low deformation, together with excellent resistance to additional elongation. The later, in particular, is important for the transfer of load caused by temperature changes in the pavement. Moreover, glass fibers facilitate milling and recycling.

Geogrid interlayer should reduce longitudinal stress in the pavement caused by the load from transport and temperature changes. The geogrid reinforcement function is provided by two major aspects. The first one is given by the properties of the reinforcement ribs limiting the crack propagation, the second one is given by the deformation of the grid, which absorbs the energy at the crack tip, thus stopping the crack from growing outward. Every time a crack starts to develop in pavements with geogrids, the geogrid ribs transfer tensile forces corresponding to the movement or opening of the crack surface. Thanks to that the geogrid is able to prevent the propagation and growth of the crack. As soon as the process is stopped, vertical shearing displacement of the crack surface will be prevented or reduced vertical shearing displacement of the crack surface will be reduced because of interlocking of aggregates in the asphalt mixture, which will prolong the life of the pavement. In general, the geogrid may be regarded as a viscous layer after its installation. When the crack extends from the overlay to the reinforcing layer, the geogrid will absorb the energy at the tips of the crack. The absorbing effect will disrupt the energy distribution in the crack thus slowing the crack growth.

ADFORS GlasGrid has been manufactured and continuously improved by Saint-Gobain since 1984. It is made of glass fibers coated with a special elastomeric polymer providing excellent protection and increased adhesion to asphalt layers for final bonding. Therefore, it has the required high modulus of elasticity at low elongation and it is relatively cheap compared to other technologies. ADFORS GlasGrid® can be applied in various ways according to the investor’s requirements. Generally, it is installed on a flat surface with the help of adhesion layer before the application of asphalt layer and compaction. Thanks to its pressure-activated adhesive backing eliminating the need for bonding layer, the installation is very uniform, smooth, clean and resistant to damage caused by construction vehicles. Laboratory loading of squares with ADFORS GlasGrid has demonstrated that the reinforced samples were 2 to 3 times more resistant to deflection than unreinforced samples and the cracks did not propagate through the layers above the geogrid. GlasGrid fully adhered to the top asphalt layer and it held both layers together during the test. These asphalt reinforcement products were used in many projects in the UK and US, where they successfully reduced the effects of reflective cracking provided they were installed properly. In other words, they did not eliminate the formation of cracks but reduced their number and they were also able to keep them at micro crack and hair crack size for a longer time. ADFORS GlasGrid has been used and improved for more than 30 years and during that time, it has been successfully used to fight reflective cracking in asphalt pavements all over the world.

ADFORS GlasGrid has already been used and documented in more than 200 airport projects all over the world. The below-described project in Canada is particularly interesting from the viewpoint of history and long-term properties of the product.

Centralia Airport in Ontario in the Huron Industrial Park site is a former World War II training base now used for light aircraft. In 1966, the airport was handed over to civil administration and in 1992 it was decided to rehabilitate the airport surface. The existing surface layers were extremely oxidized and damaged by spurious cracks (Fig. 4 and Fig. 6). Due to a very humid climate caused by the vicinity of the Great Lakes and frequent temperature changes, where the highest average temperature was 27°C in July and the lowest was -10°C in January, the surface exhibited thermal, mosaic, longitudinal and lateral cracks. Two solutions were considered – use thicker asphalt layers or use thinner asphalt layers in combination with GlasGrid. Because of the high cost of the first option and the presumption that cracks will propagate through the structure due to temperature changes, the solution with reinforcement grid was selected.

An inspection carried out in 2007 found out that even after thirteen years of service the reinforced surfaces had minimum cracks. Brad Pryde, the project engineer commented on the project: “We applied GlasGrid 8501 to the base course of the Centralia Airport with the

aim to prevent the propagation of reflective cracks because there were fears that the cracks in the subgrade will propagate to the wearing course. After 13 years of Canadian weather, reflective cracking is kept at a minimum and we are very satisfied on how well GlasGrid performed in this application.”

The project demonstrated the ability of ADFORS GlasGrid to limit the effects of reflective cracking in overlays. An additional review carried out in 2012 concluded that the cracks which propagated to the wearing course are limited or they are in locations where serious cracking in the subgrade was found before the application.

Glass fiber reinforcement grids have been used to limit the propagation of reflective cracks in asphalt overlays for more than 30 years. Today, more than 200 airports where these reinforcing components were used for the reconstruction of runways, taxiways, and aprons are documented. Laboratory in-situ testing, as well as real applications, demonstrated that ADFORS GlasGrid is able to limit the propagation of reflective cracks 2 to 3 times if correctly designed and applied. This leads to prolonged life of the pavement and lower repair and maintenance costs. For standard airfield pavements, this benefit can lower the lifecycle costs of asphalt overlays by up to 20-30%.