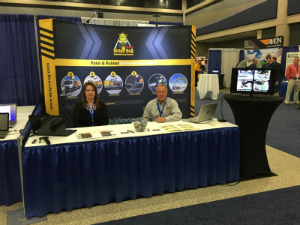 Experts have come together to discuss methods of removing snow from roads and runway environments at an event this year.

“A Blizzard of Ideas”, the theme of this year’s 49th NEC / AAAE International Aviation Snow Symposium held in Buffalo, NY.

The symposium focuses on airfield snow removal and winter operations. The symposium is the largest gathering of its kind.

Airport managers and officials from around the world gather to learn best practices in airfield snow removal and airfield maintenance.

Industry leaders are also on hand to share ideas and strategies. Hog Technologies is pleased to have been a part for many years and to continue as a sponsor of the Idea Corner and Legacy Award.

Hog Technologies Sales Team, Michael Lettengarver and Cindie Hekkila, at our booth, ready to give answers, candy, passport signatures for a prize drawing and a smile!

The clean-up after a heavy snowstorm and the associated operating delays can easily cost a major airport more than a quarter of a million dollars.

The brooms used in snow removal can over time polish the runway surface, reducing the friction levels, which is where the Stripe Hog comes in, retexturing the surface to safe levels.

But that’s just the beginning of the applications a Stripe Hog has for a runway. There is the airfield marking removal to keep in line with ever-changing FAA rules and regulations, and of course the rubber deposits left by plane landings have to be removed when the runway friction results dictate. An airport that owns a Stripe Hog puts it to good use all year long, not just after snow removal.