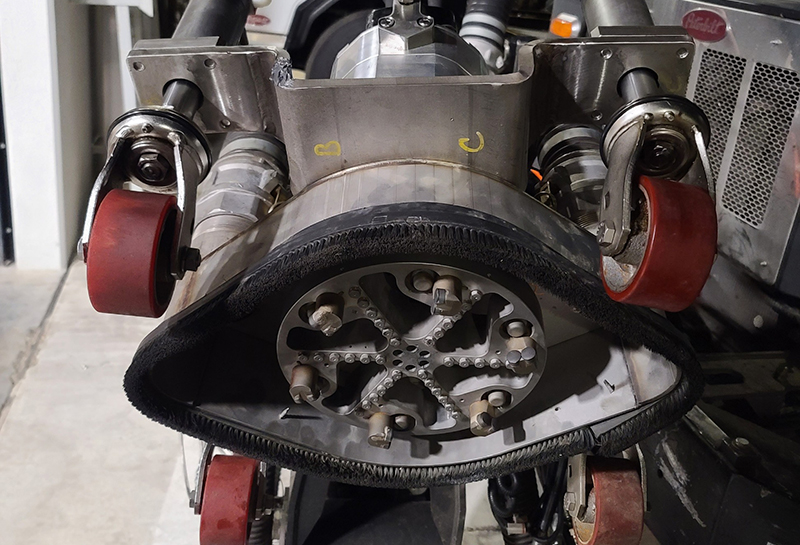 The Hog Tusk is the latest innovation from Hog Technologies. It is a four-in-one head that attaches to select Stripe Hog water blasting systems. The Hog Tusk uses a combination of 1in PCD grinding teeth and 40,000psi water blasting nozzles to quickly and efficiently remove markings from surfaces. The grinding teeth remove the marking down to the surface while the water jets remove the remainder of the marking by getting down into the surface’s macro and micro-texture. This method results in removing markings twice as fast while only using half of the water typically needed if the marking were to be removed using water blasting only.

All of the functions of the Hog Tusk can be controlled from inside the cab using a PLC controller. Using the PLC controller, an operator can adjust cutting depths that are accurate within 10 miles. The Hog Tusk also utilised Downforce Control for consistent removal. A 3in dual vacuum also allows for simultaneous recovery of debris, removing the need for a sweeper or broom truck to follow behind the vehicle. There is even an option to stow the Hog Tusk on the chassis for long transport.

The rationale behind this innovation came from developing a way to remove pavement markings faster and more efficiently. One of the things we boast about is that we like to optimise performance while minimising costs. The Hog Tusk accomplishes that by removing markings twice as fast compared to using just water and it does so by consuming half of the water required to remove the marking. This results in faster job times and less water consumption.

Until now, grinding and water blasting existed as separate entities as marking removal methods. Without simultaneous vacuum recovery, grinding creates dust that can be inhaled by workers while performing the job. This could lead to serious negative health effects as outlined by the Occupational Safety and Health Administration (OSHA), which recently revamped its guidelines for a safe work environment. Water blasting is a more eco-friendly option and has been the best removal method to date. However, combining water blasting with grinding marries two of the top removal methods and when you factor in water for dust suppression and simultaneous vacuum recovery, you end up with a safe working environment that falls well within OSHA’s standards, all while increasing performance and reducing operational costs.

The Hog Tusk is perfect for any contractor that removes any type of markings using a Stripe Hog. Since the head is simply an attachment, a Stripe Hog owner simply needs to switch the blasting head. The head is also capable of just performing one of its combo functions on its own. This means you could grind only or water blast only with the same head so there wouldn’t be a need to constantly switch back and forth.

The impacts of the Hog Tusk are already being felt as our customers are beginning to switch to this new combo blasting head. The ability to save time and money without sacrificing results is beginning to become realised by our customers. We believe the Hog Tusk is going to be the answer to efficient marking removal for years to come and others may try to imitate it once that success is felt. For now, the Hog Tusk is only available from Hog Technologies.