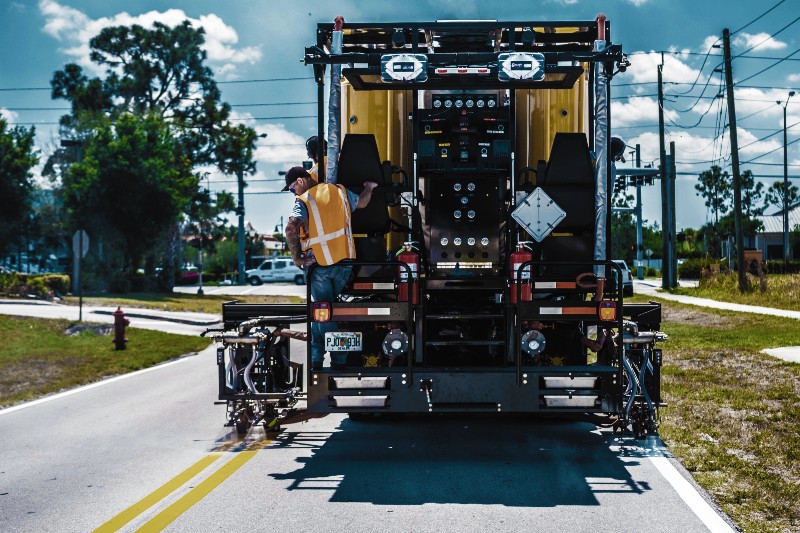 The Thermo Hog TH16.0 from Hog Technologies is a thermoplastic longline striping truck. The Thermo Hog boasts many innovations that improve upon a 30-year tried-and-true method of applying pavement markings.

The Thermo Hog uses heated oil to evenly heat the surface of the melter. This ensures that the thermoplastic is heated at an even 500°F instead of the 2,000°F that older, traditional kettles use. Since the melting temperature is so low, it stays below the flashpoint of the thermoplastic, which results in zero charred or scorched material. In addition, the glass beads also are exposed to a temperature low enough to where they do not melt and fuse together.

This means that the days of waiting for your thermoplastic truck to cool down at the end of the day to allow the material to settle to the bottom before hardening are over. Since the melter evenly heats up from top to bottom, you can instantly shut down the Thermo Hog and start it back up without worrying where your thermoplastic and beads settled and cooled. Starting up is quick and the entire system goes from cold to working condition in under one hour, saving companies precious time that was previously spent waking up early to start a truck, performing the striping job and spending the rest of their shift waiting for the truck to cool down.

The Thermo Hog is also, on average, 7ft shorter than competitive thermoplastic trucks and weighs about 5,000lbs less when the melters are empty.

Thermoplastic can be loaded either using the Hog Lift system which raises pallets of material up to the feeder or via a conveyor belt system where an operator can place bags of thermoplastic on the belt at waist height to help reduce worker fatigue. In addition, there are camera options for more accurate line laying as well as a Hog Speed Control system, which allows you to set and control the speed of the truck, freeing up the operator to focus on laying the lines evenly and precisely.

The Thermo Hog is also available in three other sizes ranging from twin 4,000lb tanks up to twin 16,000lb tanks. The Thermo Hog’s melting technology was also placed onto a skid with the Thermo Pre-Melter line of products so that you can have the same melting performance in a smaller, more versatile solution.

All of our vehicles come with a training programme called Hog Tech University. Hog Technologies is the only manufacturer of equipment that requires a license to operate. This is because Hog Technologies believes that a well-trained operator will have a much higher success rate with a job than someone who is untrained or unqualified to run or operate the equipment. The leading cause of damaged surfaces is the results of untrained people operating the vehicle.