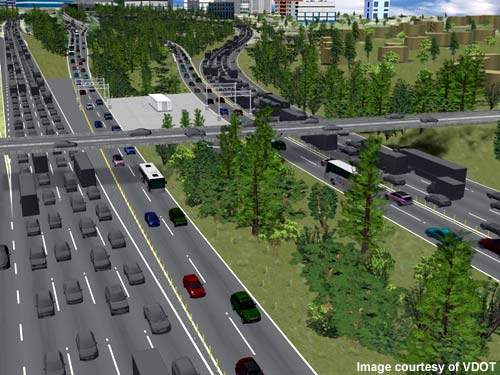 The stretch of road on the Capital Beltway where the scheme will be in place handles 200,000 vehicles per day. 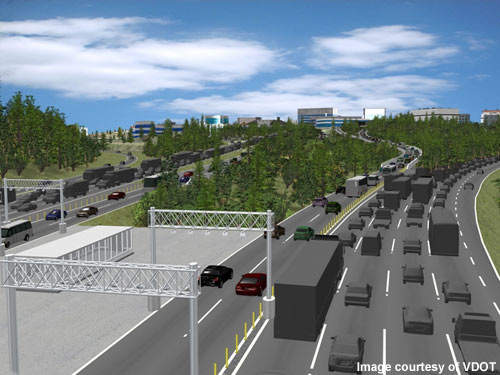 Drivers will be informed of current toll rates while travelling along the Capital Beltway so they can choose whether or not to use the HOT lanes. 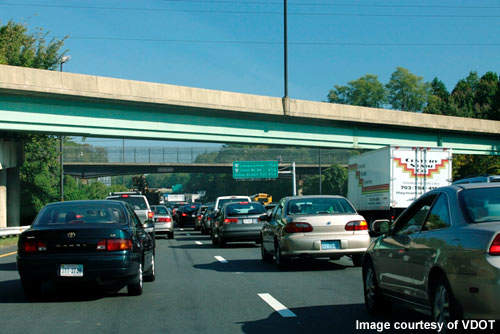 The Capital Beltway is currently often congested, but high-occupancy lanes are hoped to encourage ride sharing and therefore fewer vehicles.

The Tysons Corner interchange on the Capital Beltway will see a number of improvements.

The HOT Lane will run along a 14-mile stretch of the Capital Beltway.

The new HOT system will have four lanes with different tolls depending on the time of day, number of passengers in the vehicle and congestion.

The idea is not necessarily new as it has been used with some success in a lot of US cities, but in this instance the high-occupancy toll (HOT) lanes on the I-495 (interstate 495) is governed by a variable toll. The toll varies depending upon the time of day when travelling, the number of passengers in the car and the prevailing congestion (real-time traffic conditions are monitored to manage the toll).

The scheme is being introduced by the Virginia Department of Transportation (VDOT) in order to keep the HOT lanes on the route congestion free no matter what time of day (even during rush hour).

“The toll will vary depending upon the time of day when travelling, the number of passengers in the car and the prevailing congestion.”

Vehicles carrying three or more passengers (HOV-3) and also buses and emergency vehicles can use the HOT lanes at no charge (large trucks are not allowed). However, vehicles with fewer passengers can choose to pay a variable toll to use the new express road (congestion pricing of $5-$6).

The toll uses an electronic system E-Z Pass to collect the toll without need for toll booths. On the approach to the tolled area an electronic variable message sign informs drivers of the latest toll rates before they choose to use the HOT lanes or the free-to-use lanes.

Once a driver enters the HOT lane at a particular time and rate the toll price is fixed for that driver. This eliminates an increased price due to traffic slow down while a vehicle is in the system.

Planning for this project was started in 2003 and it has taken five years to move the project to the stage of starting construction. The work started in July 2008 on a 14-mile stretch of the I-495 (Capital Beltway) between an area just north of the I-95/I-395/I-495 interchange to just east of the Old Georgetown pike (known as route 193). This stretch of road handles 200,000 vehicles per day.

The project has been estimated to cost around $1.4bn to design and construct. It was officially opened to traffic in November 2012. The State of Virginia contributed $409m towards the cost of the project over the five-year period of construction. Under the terms of the concession, VDOT is allowed to make improvements to the roads in the area of the HOT scheme but must allow the concessionaire the option to increase the capacity of the HOT lane system if viable as an alternative.

To ensure that HOV-3 is always free in the system and that there is no disincentive for carpool and transit use on the HOT lanes, the State of Virginia will make partial payments to the concessionaire in the unlikely event that HOV use exceeds 24% of total traffic (payments could be up to $1m per year). This provision has been put in place to ensure that unforeseeable changes in overall travel patterns over the period of operation of the concession do not restrict the HOT lanes ability to generate enough revenue to pay for the operations and maintenance of the lanes, as well as paying back the construction debt.

“The project has been estimated to cost around $1.4bn to design and construct.”

Capital Beltway Express has been granted an 80 year concession to operate the toll lanes although the ownership of the new lanes is retained by VDOT who will also oversee maintenance.

Fluor Enterprises has 10% of Capital Beltway Express and Transurban control 90%. The majority of the construction work was carried out by the Lane Construction Corporation.

The project calls for the construction of four HOT lanes (two in each direction) to be constructed in the centre of what is now a 14-mile stretch of the I-495 that is particularly prone to congestion.

Improvements/refurbishment to the existing road on that stretch is also part of the project. The construction project included a number of integrated projects: