October 2006 (consultation process was completed for work to start)

A3 reroute and tunnel 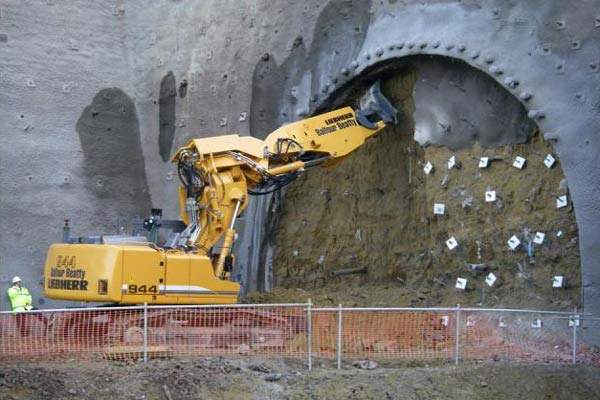 Tunnel excavation got underway in February 2008. 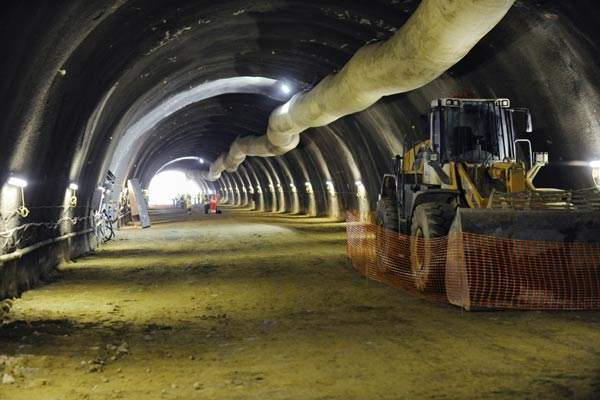 The tunnels will go under the Devil's Punch Bowl. 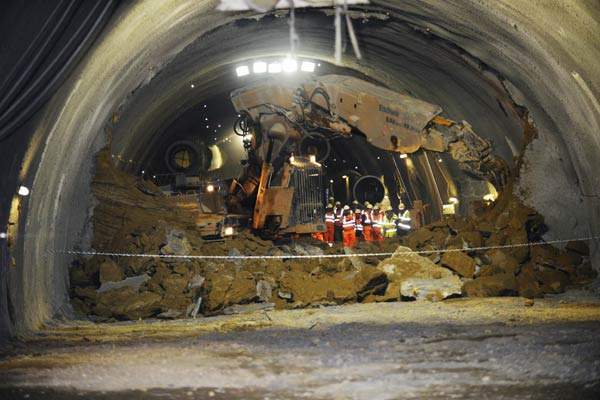 The tunnel is expected to be open to traffic by mid-2011. 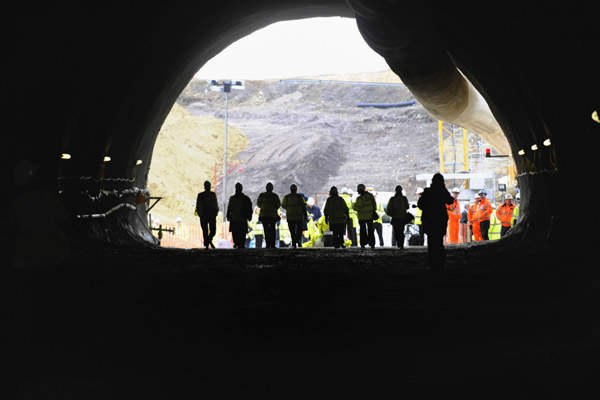 The tunnel will be the longest non-estuarial tunnel in the UK.

The A3 Hindhead project is a major UK road improvement scheme that completes a dual carriageway road system between London and Portsmouth along the south coast. The road section is around four miles (6.5km) long and includes a 1.1 mile (1.8km) section of twin-bored tunnel.

The route runs from Bramshott Common (Surrey-Hampshire border), north past the village of Hindhead, into new tunnels and on to rejoin the A3 at Thursley. The project was designed to relieve congestion around the A3/A287 crossroads and the small country roads that are subject to rat running (the A3 carries over 28,400 vehicles per day). One advantage of the project is the closure of the A3 section through Hindhead Village (freeing the village from grid-lock every morning) and around the Devil’s Punch Bowl hill (an area of special scientific interest). The new tunnels carry the A3 underneath this special region at a depth of around 65m.

Pedestrians and motorcycles below 50cc will not be allowed through the tunnel and diverted via Thursley and the Tilford Road. The project was awarded International tunnelling project of the year in December 2010.

The project was officially opened to traffic in July 2011. More than 30,000 vehicles are expected to pass through the tunnel each day.

Balfour Beatty was appointed as the design contractor for the project. Balfour proposed the sprayed concrete lining method (SCL) of tunnelling for the Hindhead project.

Designed to have two separate bores, the tunnel is 1.83km long with approximately 1.77km of bored tunnel and 30m of cut and cover at either end. Maximum depth of the tunnel is 65m below ground level.

Each bore includes a 7.3m-wide two-lane carriageway with 1.2m-wide verges on both sides. Headroom of 5.03m and further clearance of 250mm to the underside of any plant suspended above the vehicle gauge is maintained in each bore. It acts as a safeguard against flapping ropes and tarpaulins.

The tunnel bores are linked by pedestrian cross-passages at every 100m throughout the tunnel.

The Tunnel Design and Safety Consultative Group (TDSC) and the Highways Agency will together develop these issues. Representatives of emergency services, local authorities and the Environment Agency comprise the TDSC group.

The Highways Agency established a network of survey stations in the planned A3 improvements area approximately 16 years ago and linked these to the Ordnance Survey grid. A global positioning system (GPS) checked the existing stations and established new stations necessary for the works. The GPS receivers set on the survey stations recorded their position for at least once an hour, after which the results were processed to give at least centimetre accuracy.

At each end of the tunnel four permanent survey ‘monuments’ were established. The most advanced station (the one nearest the tunnel face) helped control the tunnel excavation.

The project began in January 2007 and tunnelling work started in February 2008. The two tunnels were joined at the breakthrough point in February 2009.

“Safety improvement work at the A3 junction near Thursley in Surrey began in January 2011.”

A southbound carriageway between Spaniard and Hazel Grove was completed and opened in 2009.

Other construction works completed in 2009 included the Miss James footbridge, tunnel service buildings and tunnel lining works. Drainage installation and pavements for the new A3 were completed in 2010.

Works planned for 2011 included opening of the new A3, testing of tunnel mechanical and electrical systems and renovating the existing A3. Complete landscaping and planting will be carried out in 2012.

Safety improvement work at the A3 junction near Thursley in Surrey began in January 2011.

The tunnel is a twin bore construction, each of which carries two lanes through the sandstone of the Hythe Beds (the 10m bore tunnels will be lined by spray concrete and some cast in-situ elements). The southern end of the tunnel is excavated through sand and required the use of a crown canopy support system. This is the longest non-estuarial tunnel in the UK and carries state-of-the-art safety specifications. There are pedestrian-access cross-passages every 100m (escape tunnels) along with communications and radio interrupt systems to provide drivers with information.

“There are pedestrian access cross-passages every 100m (escape tunnels) along with communications and radio interrupt systems.”

In addition, the tunnel has CCTV, a high lumina lighting system and ventilation systems. The supply of electricity to the tunnel comes from both south and north power networks. If one fails the other can be put to use, and if both power networks fail, there is a back-up power supply.

The project involved the handling of over one million cubic metres of earth, which will be reused in the scheme.

Techniques to minimise land take during the project included soil nailed cut slopes and reinforced soil embankments to provide steepened slopes. A portion of the land involved around the Devils Punch Bowl belongs to the National Trust, which has been involved in the consultation process.

Construction of Canadian Memorial Underpass in the southern part of the tunnel was completed in 2007.

The underpass in the northern part of the tunnel was completed in 2008, along with Blackhanger Underpass and Hazel Grove overbridge. Hammer Lane Underpass was opened in the same year. The Greensand way through which the local traffic can pass, was also completed in 2008.