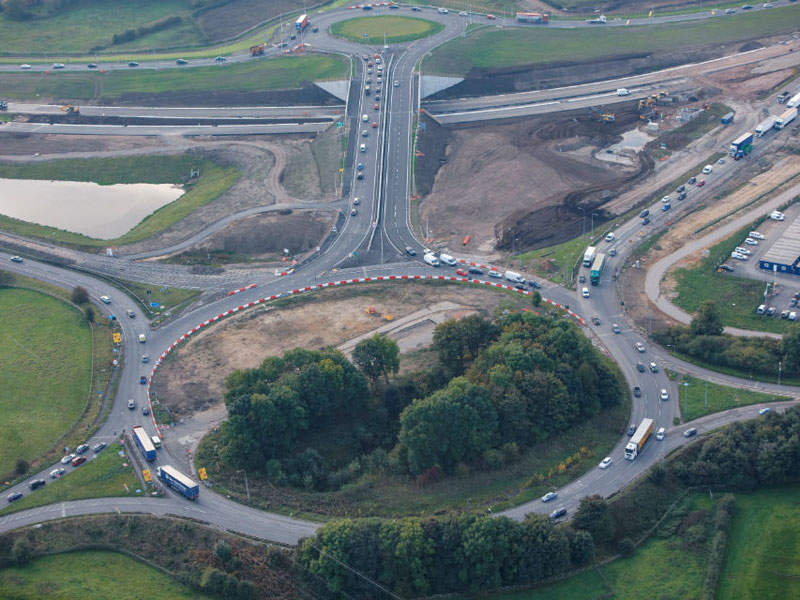 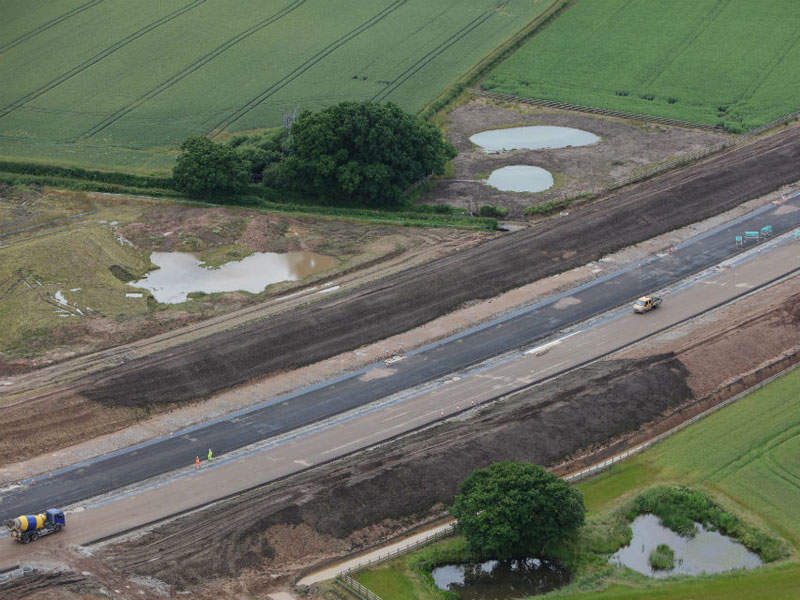 Bird’s eye view of a section of the Knutsford-Bowdon Improvement scheme under construction. Credit: Crown copyright. 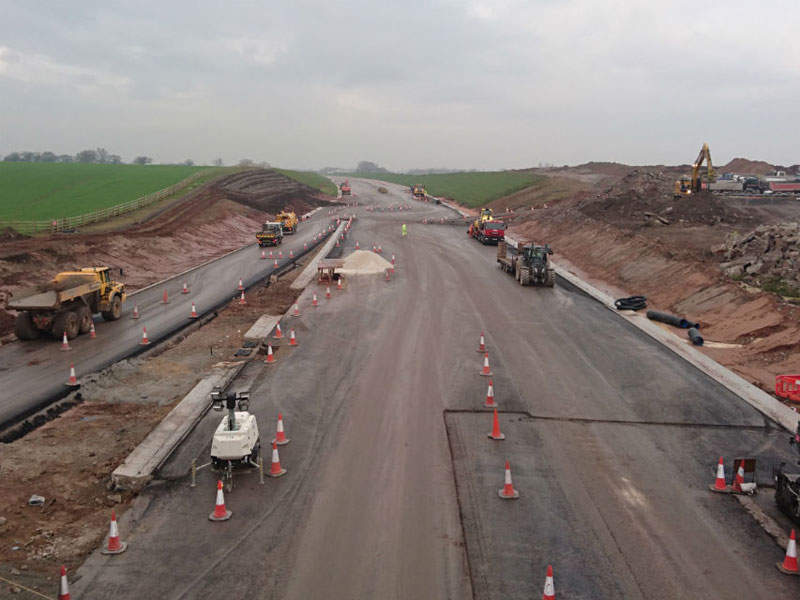 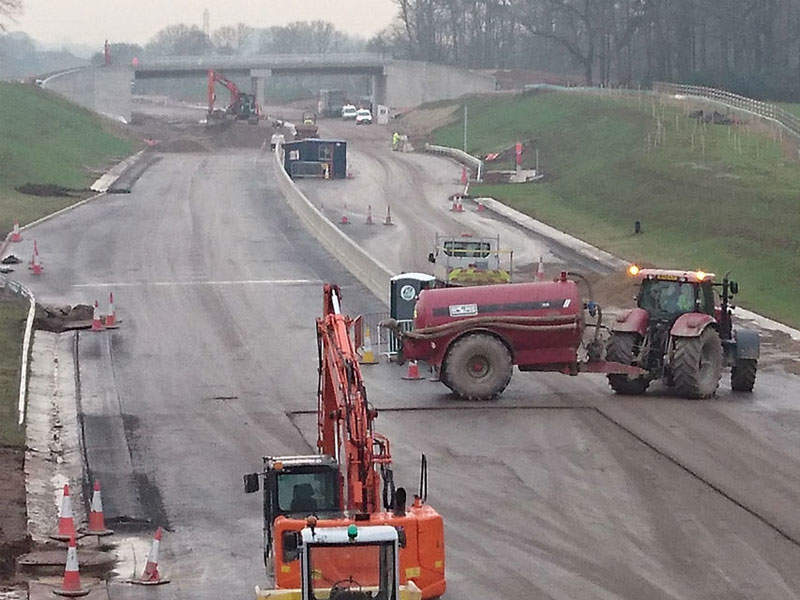 The final phase of works on the dual carriageway began in February 2017. Credit: Crown copyright. 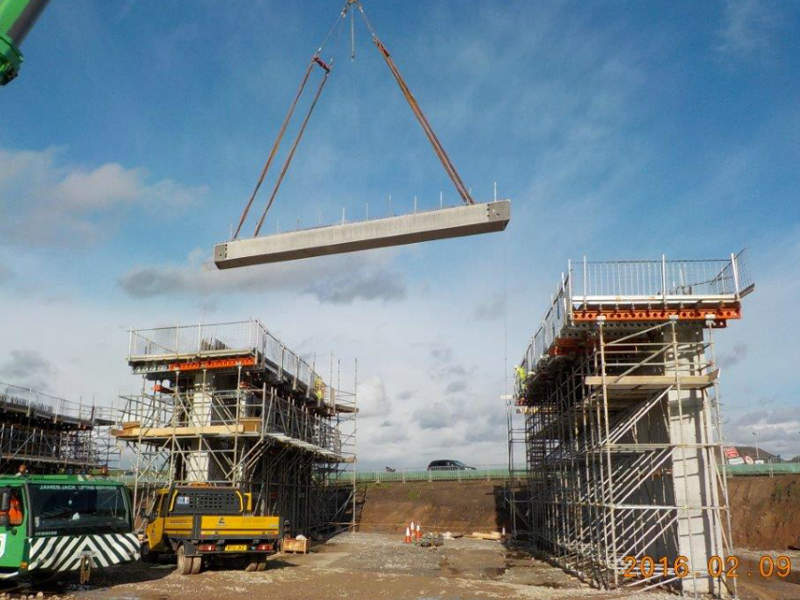 A new bridge was constructed on the route as part of the Knutsford-Bowdon Improvement scheme. Credit: Crown copyright.

The A556 Knutsford-Bowdon Improvement scheme involved the construction of an approximately 8km-long dual carriageway to replace the existing four-lane single carriageway between the M6 Junction 19 near Tabley/Knutsford and the M56 Junction 7 near Bowdon.

The project was completed at a cost of £192m (approximately $240m). The new dual carriageway bypasses Tabley, Mere and Bucklow Hill to avoid long-distance traffic from those villages. It rejoins the existing route of the A556 near Bucklow Manor.

Being a major strategic route connecting north Cheshire and south Manchester, the A556 carries approximately 51,500 vehicles a day. The section improved under the Knutsford-Bowdon improvement scheme was earlier heavily congested and mostly a single four-lane carriageway with direct access to number of properties and field entrances.

Additionally, two motorway junctions and two other major junctions on the A556 restricted turning movements, resulting in traffic congestion at junctions along the A556 during peak times and road maintenance works.

The A556 also witnessed 98 accidents between 2007 and 2011, resulting in one fatality and 13 serious injuries. The new improvement scheme has been envisaged to enhance road safety, while reducing journey times. It also provides improved connection to Manchester Airport.

TThe existing A556 Chester Road will be de-trunked and operate as a single carriageway.

The project forms part of the Road Investment Strategy, which invests £15bn ($18.71bn) in motorways and major A roads by 2021. The larger project is being implemented by Highways England under the Northern Powerhouse initiative.

The Highways Agency finalised the preferred route of the scheme in March 2010 and funding for the project was confirmed in a statement by the UK Transport Secretary in October the same year. Public consultation on the scheme began in January 2012 and was concluded in April the same year.

An application was submitted by the Highways Agency for consideration of Knutsford-Bowdon Improvement scheme in April 2013. It was consented for examination in May 2013 and received development consent from the Secretary of State in August 2014.

Construction on the A556 Knutsford-Bowdon Improvement

Drainage installations and carriageway foundations were concluded along 90% of the route by November 2016, while landscaping and extensive tree planting commenced in late-2016.

Seven new bridges and a pedestrian underpass across the new dual carriageway were built. Other works such as concrete retaining walls and repairs to two existing bridges were also completed. The slip roads at Yarwood Heath and Bowdon roundabouts were reconstructed and Junction 7 of the M56 was also improved as part of the project.

The final phase of work for the new A556 Knutsford-Bowdon dual carriageway began in February 2017. The new dual carriageway was opened to traffic in March 2017. The de-trunked Chester Road will be installed with eco-friendly lighting and include a green bridge to offer a safe road crossing for wildlife.

Contractors involved with the road improvement

In January 2011, Costain was awarded an early contractor involvement (ECI) contract by the Highways Agency to design and build a new carriageway under the A556 Knutsford-Bowdon Improvement scheme.

Jacobs was preferred by the Highways Agency as the designer for the improvements to the A556 carriageway.

Capita Symonds provided the detailed design for the A556 Knutsford-Bowdon Improvement scheme.

L&R Roadlines was subcontracted by Costain to provide road marking and surfacing solutions for the improvement scheme.

As managing agent contractor (MAC), Aone+ is responsible for the management and maintenance of the carriageway.