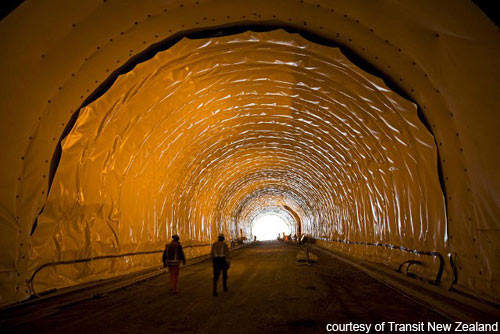 The Johnstone's Hill tunnels are part of the Alpurt B2 motorway and will run parallel to each other. 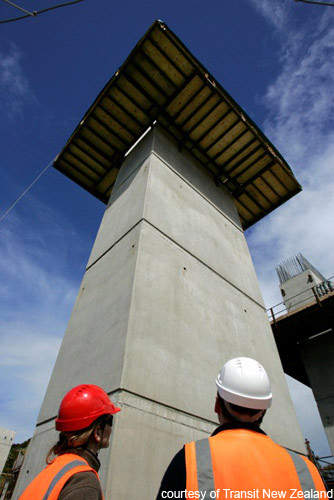 A support from the 537m-long Waiwera viaduct; this twin bridge will be the largest bridge throughout the entire Alpurt B2 motorway project. 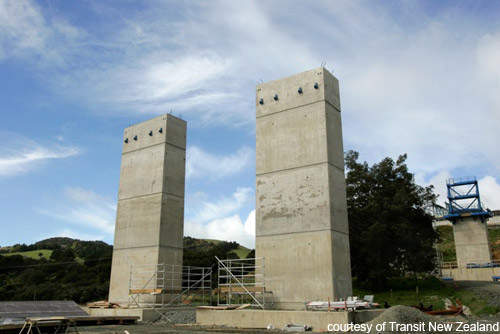 The construction is being undertaken on rough terrain, involving the removal and dispersion of 3 million cubic metres of earth. 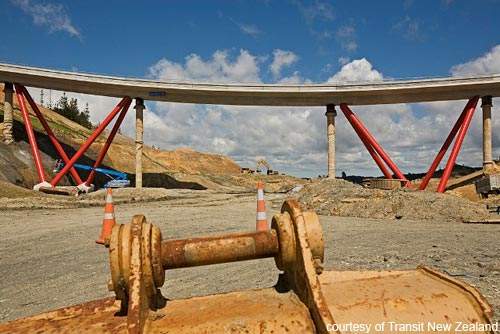 The Hillcrest overbridge will be used for a later link up to an extension of another motorway from Hillcrest Road in Orewa. 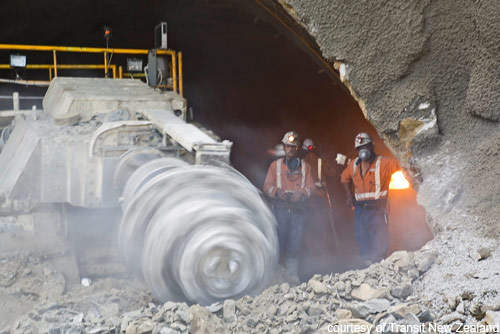 Each of the Johnstone's Hill tunnels is 345m long and 12m wide; environmentally friendly construction is taking place. 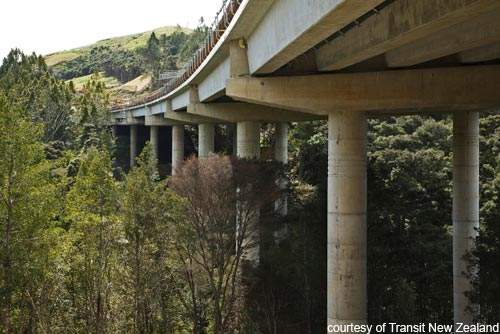 The Otaneura eco-viaduct has been constructed to provide an ecological corridor to the wildlife beneath. 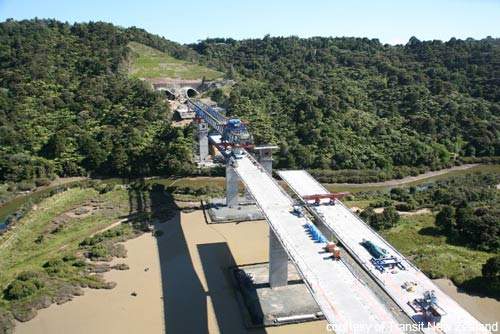 Over the last ten years New Zealand has been spending more and more public and private money on the upgrade and extension of its motorway system. One of the largest engineering projects ever undertaken in New Zealand is the 7.5km SH1 Northern Motorway Extension (also known as the ALPURT B2). The new four-lane motorway is the country’s first state highway that charges a toll electronically for use.

This project was the last stage of the Northern Motorway project between Albany and Puhoi. The 7.5km section extends northwards from Grand Drive in Orewa to connect with the existing State Highway 1 route at Titford’s Bridge, Puhoi.

The new motorway also allows state highway traffic to bypass the town of Orewa, eases traffic congestion, and provides a safer route between Auckland and Northland.

The motorway has been constructed for the government agency Transit New Zealand. The project was carried out under a public private partnership (PPP) arrangement and required an investment of more than $100m.

Construction began in December 2004 following the release of an initial $20m grant by Land Transport New Zealand. The motorway was completed by January 2009 and involved 130,000m² of pavement.

The motorway project also involved construction of five culverts, twin tunnels at Johnstone’s Hill, and seven bridges extending 1.1km in length. Viaducts including three large bridges were built at Waiwera, Nukumea and Otanerua. Two of them are eco-viaducts. The project was carried out over rough terrain and required removal and dispersion of more than 4 million cubic metres of earth.

The structures along the motorway route include a full diamond interchange at Orewa (68m long, 10.25m wide and four spans) incorporating a bridge (one lane in each direction and a footpath). There are two eco-viaducts at Nukumea and Otanerua, providing ecological corridors beneath the structure to allow movement of wildlife.

“The largest bridge in the project is the twin bridge Waiwera Viaduct (537m long with span lengths of 76m).”

The Nukumea Eco-viaduct (180m long, 23m wide and six 30m spans) crosses the northern arm of the Nukumea Stream and provides an ecological corridor under the motorway for wildlife. Similarly, the Otanerua Viaduct (256m long, 25m wide with a clearance of 32m over the stream and eight spans of 32m) spans across the northern tributary of the Otanerua Stream and is also an eco-viaduct.

The largest bridge in the project is the twin bridge Waiwera Viaduct (537m long with span lengths of 76m).

The Hillcrest Bridge is an overbridge providing access to the west of the motorway from Hillcrest Road in Orewa. Finally, there is the Johnstone’s Hill Tunnels (380 long and 12m wide).

The 537m-long Waiwera Viaduct was constructed as two independent structures, which have a separation varying from 2.5m to 11m. The variable separation was necessary to split the northbound and southbound lanes before entering the tunnels, which are situated immediately north of the viaduct.

The bridge superstructure is the tried and tested pre-stressed concrete box girder and was constructed using a precast segmental balanced cantilever method using an overhead gantry. This method was chosen since it allowed the superstructure to be constructed without access from ground level; the ground is off-limits in case habitats are disturbed or damaged.

The piers were constructed from reinforced concrete, incorporating a microsilica additive for protection from the marine environment. The viaduct has a design life of 100 years.

The Johnstone’s tunnels are two parallel tunnels 15m apart; they were the preferred option over a deep cut through the hills as they are expected to cause less environmental damage.

Each of the tunnels is 380 long and 12m wide with a height of 9m and there are two cross tunnels to provide escape routes if either tunnel has accident involvement.

Construction was undertaken using a 50t road header to excavate through inter-bedded sandstone and siltstone (30MPa hardness). The initial tunnel support used a system of sprayed concrete with steel fibres embedded provided by Sika NZ and included the Sika ViscoCrete and SikaTard systems that allowed the concrete to be sprayed without setting too quickly.

In the tunnel construction the northern portals were cut and covered, which made it easier to restore the natural contours of the hill after construction was completed. The southern portals are located in an environmentally sensitive area, so the construction team planned to dig both tunnels from the north and just do the minimum of work from the south. This reduced the work station needed on the southern slope and also minimised potential damage.