Cost of lighting for motorway 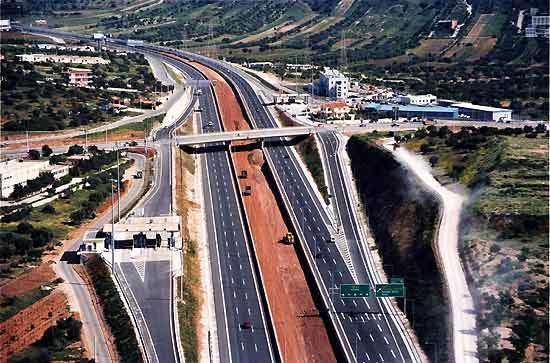 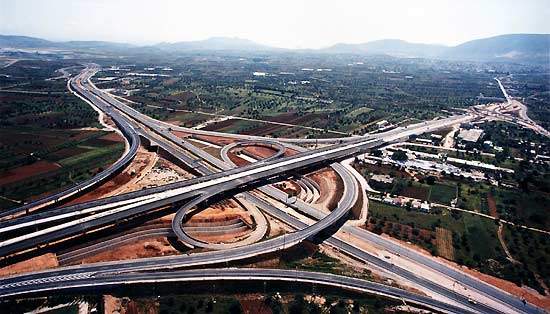 The Attiki Odos is a cutting edge motorway in Europe, meeting the highest design standards for high-speed toll motorways. 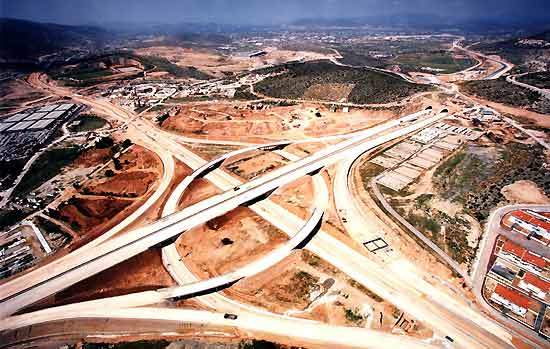 14 Greek construction companies have worked together to design, construct and finance the motorway in co-operation with a French enterprise. 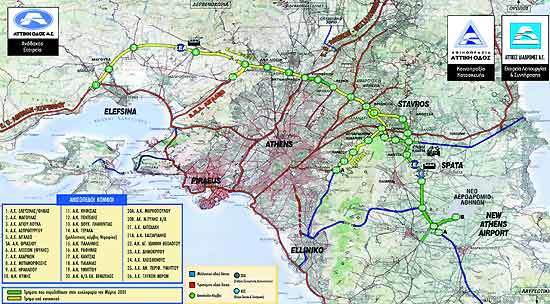 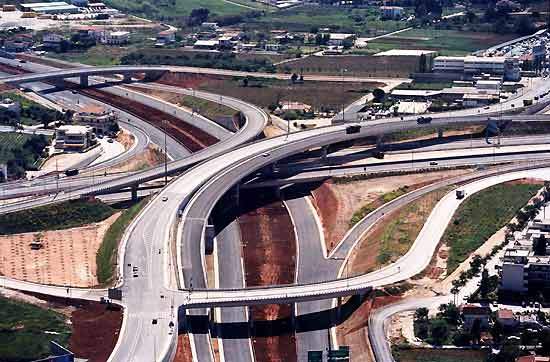 The motorway includes hundreds of overpasses and underpasses along the length of it. 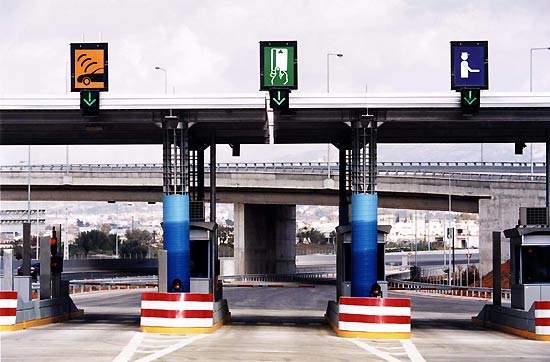 Toll stations are located at the interchanges leading to the Attiki Odos and the toll fare will be paid when entering the motorway. 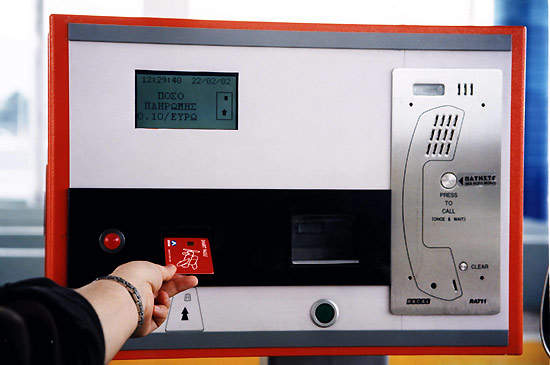 With a smart card the driver pre-pays a specific amount and each time he/she passes through the corresponding amount is electronically deducted from the card. 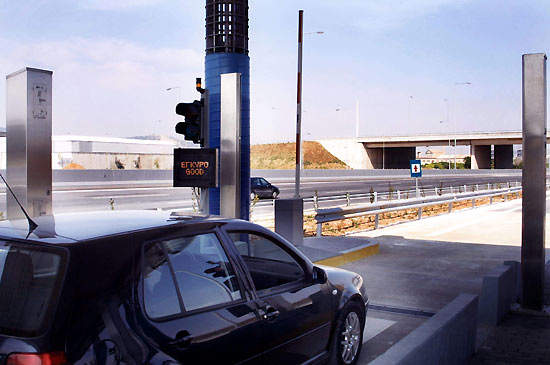 Electronic Toll Collection involves a transponder placed on the windscreen of the vehicle transmitting an identification signal to the antennas at the toll stations that charges the toll amount automatically. 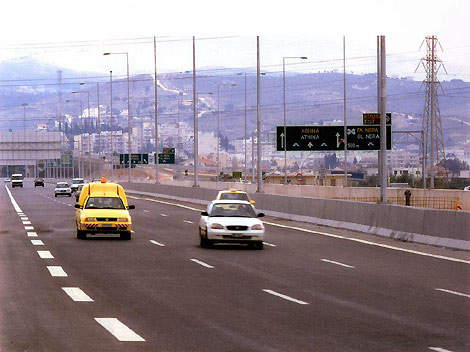 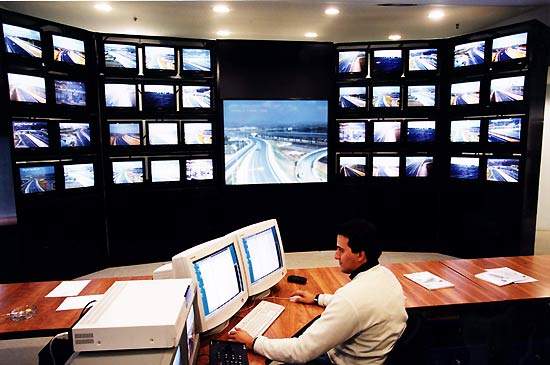 The Traffic Management Centre monitors any likely incidents, and coordinates and activates immediate intervention and assistance 24 hours a day. 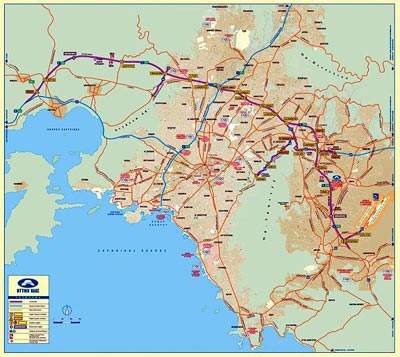 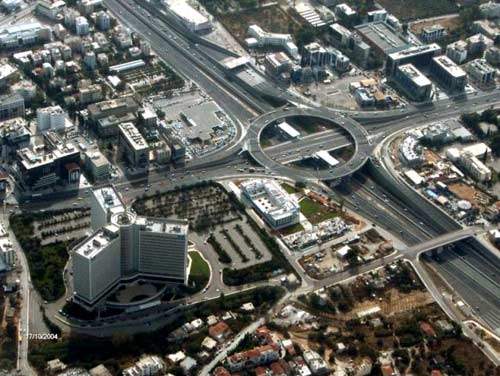 The consortium responsible for the original construction of the Attiki Odos motorway is now proposing an extension. 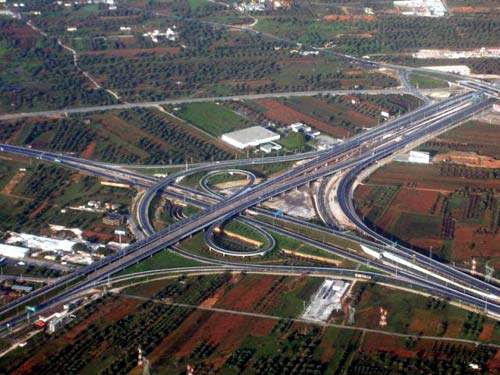 The Attiki Odos motorway has been constructed to high design standards, ensuring its safety. 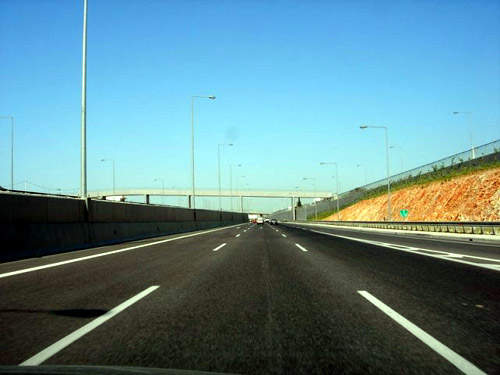 The Attiki Odos motorway is one of the safest in Europe.

It offers three traffic lanes in each direction, one emergency lane, 32 multi-level interchanges and hundreds of overpasses and underpasses. It is staffed with specially trained emergency units and uses the most modern equipment for incident detection, providing the users of the motorway with top quality services.

The motorway construction was started in 1996–97, cost approximately $1.8bn and was opened in March 2001 to partly serve the new Eleftherios Venizelos International airport. Some sections of the motorway were not completely finished until June 2004.

“The Attiki Odos is a cutting edge motorway in Europe, meeting the highest design standards for high-speed toll motorways.”

The Attiki Odos is a cutting edge motorway in Europe, meeting the highest design standards for high-speed toll motorways. This enables a safe journey the entire length of Attica without the need for traffic lights, connecting more than 30 districts in Attica.

The motorway was financed and constructed under a DBFOT arrangement with a consortium of companies under the name Atiki Odos SA, a group of Greek companies with Transroute International of France. The operation agreement goes up to 2024 although arguments have been put forward for an extension. Aktor SA, one of the participants, has suggested that the operating contract could be extended for a further five years if the consortium builds a planned extension to the motorway system.

The Attiki Odos motorway was designed to assist in easing traffic congestion in the greater area of Athens, reducing the traffic in the central arteries.

It forms a backbone for the transport network, moreover assisting the strategic layout of Attica’s energy and communication networks and contributing to the integrated physical and urban planning of Attica.

The Attiki Odos is incorporated in the Trans-European Networks (TEN). It is a priority project aimed at developing the greater area of Athens and Greece as a whole, namely as it forms part of the Athens peripheral ring road creating a bypass of Athens and thus easing congestion. It also forms a link between the main transport infrastructure such as airports, ports, intercity railway stations, urban train stations, metro, intercity coach stations and heavy goods transport stations.

The Attiki Odos has incorporated a total of approximately 22,000 lighting fittings. The cost of the lighting installation was around €5,200,000. It is lit by 7,000 pieces of SRP 832 luminaries equipped with SON T Plus high-pressure sodium lamps (250W and 400W).

The toll stations are illuminated with 800 SNF 111 Comfortvision asymmetrical beam floodlights. These are equipped with tubular high-pressure sodium lamps of 1,000W installed on 35m masts. Uniform lighting of more than 50lux horizontal illuminance is provided. The objective is to ensure safe driving with minimum glare.

AAn Integrated Toll and Traffic Management System (ITTMS) is installed and operated at the toll stations, allowing the use of smart cards (a card that a driver pre-pays a specific amount and each time he/she passes through the toll stations, the corresponding amount is electronically deducted from the card) and electronic toll collection (ETC), which involves a transponder placed on the windscreen of the vehicle transmitting an identification signal to the antennas at the toll stations that charges the toll amount automatically.

The three traffic lanes, emergency lane and central reservation are all equipped with skid-resistant asphalt pavement. Fencing and substantial lighting and all these factors contribute greatly to the safety of the Attiki Odos motorway.

“The Attiki Odos motorway was designed to assist in easing traffic congestion in the greater area of Athens, reducing the traffic in the central arteries.”

The Traffic Management Centre monitors any likely incidents via CCTV surveillance, and coordinates and activates immediate intervention and assistance 24 hours a day.

Additionally, the Intervention and Maintenance Patrol Units are staffed by trained personnel, equipped with modern vehicles and offer adequate technical support patrolling the motorway on a 24-hour basis.

Moreover, the Special Vehicle Recovery Units respond promptly and assist with any problems motorists may on the motorway.

Studies have shown that motorists will save 2 million litres of fuel a day by using this motorway road system, leading to a significant annual financial gain.

The Attiki Odos motorway was a major factor in facilitating traffic flow around and through Athens during the 2004 Olympics.

“Studies have shown that motorists will save 2 million litres of fuel a day by using this motorway road system.”

Halcrow was commissioned to provide technical expertise and management support to the lending and Guarantor Commercial Banks.

Thiessen Engineering excavated almost 3,000,000m³ of marble, limestone and schist in the Kesariani to Stavros section of the Attiki Odos highway.

ALTE Construction built the Doukissis Plakentias junction and the linking arteries to the Ymittos ring road.

The IBI of Canada designed the integrated tolling and traffic management system, including CEN compliant equipment, PREMID® System TS3200, to integrate the ETC system for the motorway.

Philips Lighting supplied and implemented all the lighting for the motorway.

ADK provided the structures, namely the preliminary design and geotechnical studies, of the rail corridor from Athens to Piraeus to Acharnon.

An extension of the Attiki Odos motorway has been planned since 2005. The new section could be up to 76km and will be constructed towards Rafina, Lavrio and Vouliagmeni (total length will then be 141km).

An extension to the Hymettus Ring south towards Vouliagmeni is also planned. Construction work on these two projects could start towards the middle of 2008; the consortium controlling the current motorway has put forward a proposal.