Ministry of Transport and Communication of Vietnam

Japan Bank of International Cooperation and Government of Vietnam 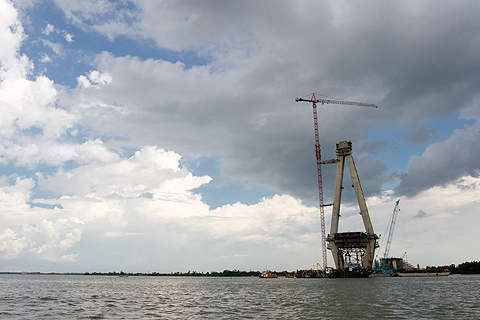 Can Tho Bridge construction in progress in June 2007. 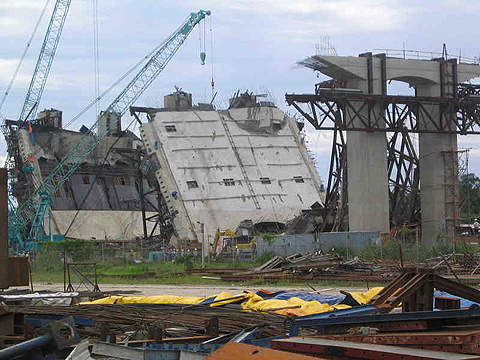 Can Tho Bridge site after its ramp collapsed in October 2007.

The Can Tho bridge spans over Hau river and connects Can Tho City and Vinh Long province in the Mekong Delta region in Vietnam. It is a steel-concrete hybrid structure cable stayed bridge built on National Highway 1 in the Can Tho city, Southern Vietnam.

The Government of Vietnam has built the bridge in April 2010 to avoid the traffic congestion on the National Highway 1A and reduce the journey time between Can Tho and Vinh Long. The bridge is currently being owned and operated by Ministry of Transport and Communication of Vietnam.

The Can Tho bridge was designed by CHODAI Co. and constructed by the consortium of Japan-based Taisei Corporation, Kajima Construction and Nippon Steel (TKN), and French sub contractors VSL and Vinacrete Pumping Systems.

TKN was the prime contractor responsible for the construction of the bridge. VSL in cooperation with Vinacrete Pumping Systems (VPS) offered concrete and concrete pumping services to the bridge.

Taisei Corporation and Kajima Construction were suspended for one year by the Vietnam Government in July 2009. These two Japanese companies were banned as the bridge support construction they were involved in had broken down.

About ¥24,847m was approved by JBIC in March 2001, for the project, as part of the Japanese Special Yen (ODA) loan facility. The remaining amount was funded by the Vietnamese Government from its state budget. The project has been insured for $200m by Petrolimex Joint Stock Insurance Company and PetroVietnam Insurance Company.

The Can Tho bridge project began in September 2004. It was originally intended for completion on 14 December 2008, but delayed as the bridge collapsed in September 2007. The bridge was finally inaugurated on 24 April 2010.

The Can Tho bridge has replaced the ferry transportation system to relieve the traffic congestions occurring on the National Highway 1A. The Cuu Long (Can Tho) bridge construction project provides employment, boosts the state’s economy and enhances the efficiency of transport and distribution sectors, while recovering the Vietnamese economy quickly.

Can Tho Bridge design

The superstructure, substructures and approach roads of the Can Tho bridge are designed as per the AASHTO LRFD standards. CHODAI Co.has played a major role during the design phase of bridge.

The total length of the bridge is 2.75km and deck width is 23.1m. The pylon height and longest span of the bridge are 174.3m and 550m respectively. The bridge features six lanes including four traffic lanes and two pedestrian lanes. The 39m vertical clearance of the Cuu Long facilitates large ships to transit below the bridge.

Can Tho Bridge construction

The construction of Can Tho bridge was divided into three phases namely Phase I, Phase II and Phase III.

“The Can Tho bridge has replaced the ferry transportation system to relieve traffic.”

Phase I included the construction of 5.4km access road from Vinh Long to the province of Hau River. The loan for phase I was funded by Japanese Official Development Agency (ODA) in March 2001. During the implementation of the Phase I programme, the approach ramp of 90m section located 30m high from the ground collapsed on 26 September 2007, leading to suspension of construction for 11 months. The approach ramp was constructed above a small island on the Vinh long side. About 59 people died and 140 were injured in the accident.

Phase II involved development of the bridge required to cross the Hau River. The ¥4,626m ($51.26m) funds for phase II were released in March 2010 by the Japanese International Cooperation Agency (JICA) for bridge construction, procurement of supplies, and procurement and installation of equipment.

The scope of work in Phase II included testing the concrete pumping systems of VPS as per the technical standards of VSL and TKN. After completion of one-month concrete pumping tests in various conditions, VPS began to pump concrete directly into the Can Tho bridge on 18 April 2007. Concrete was successfully pumped through various bends via 200m horizontal pipes and 35m vertical pipes. The pylons were constructed with robust concrete.

A 7.7km access road from Can Tho was constructed in Phase III. With the completion of the third phase, the Can Tho bridge project was successfully concluded in April 2010.