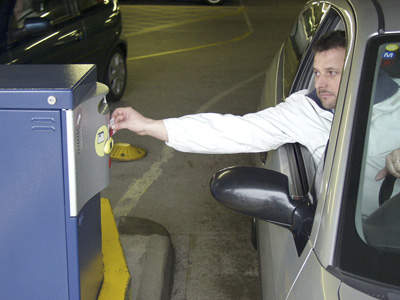 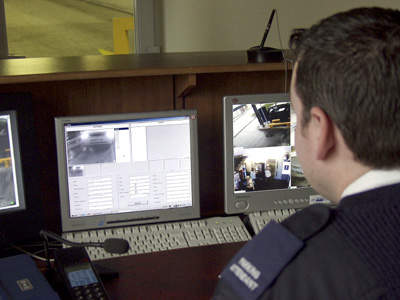 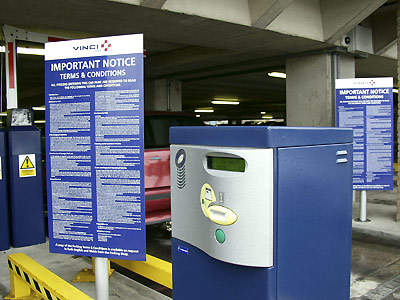 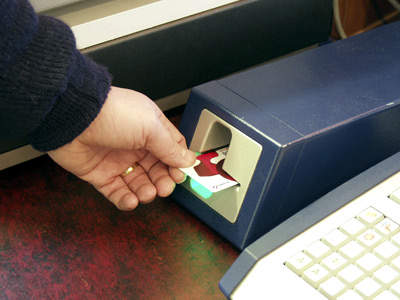 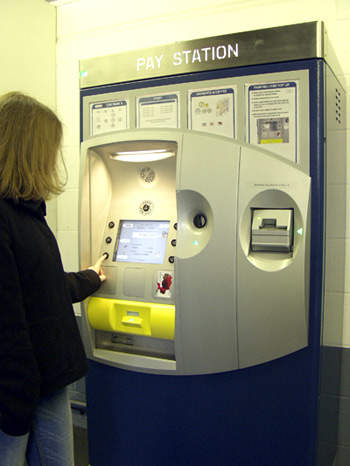 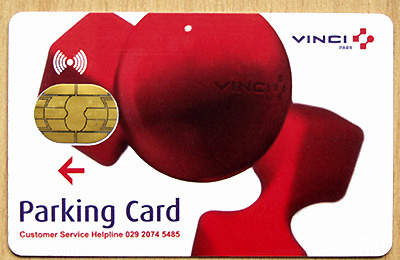 The card allows four different staff user groups access to designated car parks according to where they work and where they need to be during the course of their work. 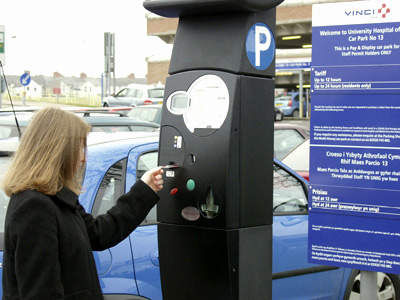 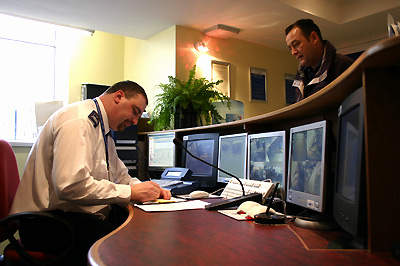 The parking shop has been refurbished to accommodate parking equipment and CCTV monitors. 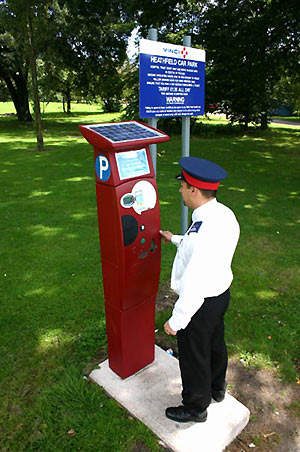 The car parking infrastructure at Cardiff University Hospital Wales (UHW) received a high-tech makeover in 2004–2005 with a new entry card scheme and licence plate recognition system. The schemes were introduced to simplify the system allowing personnel access to parking on different parts of the site according to authorisation and requirements to increase security and decrease the incidence of unauthorised parking, which is a problem in the busy area where UHW is situated.

The upgrade began in October 2004 and required an investment of an estimated £365,000; the project was completed and operational by early 2005.

The Hospital Trust awarded VINCI Park the parking management contract at the hospital site in late 2004. VINCI Park suggested improvements to develop a flexible parking management system. There are just over 3,002 car parking spaces at UHW in 23 car parks, 21 of which are open, with one multi-storey and another level facility. Before the VINCI Park improvements the car parks were a mass of different pay and display and pay on foot systems.

The initial work required the replacement of all pay and display machines and the installation of pay on foot equipment and digital CCTV. This was followed by the introduction of a combi-rechargeable smart card, car park resurfacing, bay marking and the refurbishment of the parking shop. A blue badge car park was also recently introduced fully compliant with disabled person’s legislation.

Parkeon supplied the equipment, software and SMART cards for the project. Equipment installation was carried out by J.A. Allen Builders of Blackmoor, Essex.

Not everyone needs to park in the same car park. The new system addressed this problem by introducing the SMART card system. The card allows four different staff user groups access to designated car parks according to where they work and where they need to be during the course of their work. Tariffs vary according to a car park’s designated use and the time of day. There are also facilities for multiple entry and exit to the car park over a 24-hour period for multi-shift and multi-centre based staff for a one-off payment per day (so no repaying for the same space very time you have to go out on call and come back).

VINCI Park Cardiff introduced combi-rechargeable smart cards, which are available to the 5,000 staff at UHW as well as regular or long-term patients and visitors, enabling them to use a single card to pay for parking in pay on foot pay stations at the site’s multi-level parking facilities, and in pay and display terminals in its surface car parks.

The cards, provided by Parkeon, are a convenient alternative to cash or credit cards, both for staff and regular or long-term patients / visitors. They remove the worry of not having the right coins available to pay for pay and display parking, both day-to-day and in the longer term. Staff can purchase three types of card:

Visitors who come to the site regularly may purchase a long term visitor card from the ‘parking shop’; this also offers a discount on the daily rate and is aimed at those who will be in or visiting the hospital for an extended period. Non-cardholders are able to pay with coins, bank notes and credit cards, according to the type of payment machines provided in each car park.

VINCI Park has replaced the original access control equipment in the multi storey car park with a Parkeon Varioflex pay on foot installation, enabling customers to pay by credit card, bank notes or to top up their parking card. The card scheme is integrated with video-based Licence Plate Recognition (LPR), which automatically raises an entry barrier for cardholders, speeding up entry to the car park and reducing traffic flow congestion.

The 280-space single deck car park, which was previously a pay and display car park, also now has a pay on foot barrier-controlled system. The use of contactless cards makes for quicker entries / exits at this car park.

For the surface car parks VINCI Park replaced the existing pay and display machines with 20 new Parkeon solar-powered Stelio™ pay and display terminals. Car Park 11, which was previously a mixed-use car park, has been dedicated solely to blue badge holders by the creation of 76 wide bayed spaces. This involved a complete relining of the car park to the latest DDA Standards.

"VINCI Park has invested just under £9m into the parking system at Cardiff."

VINCI Park uses Parkeon’s PC-based Parking Rights software to manage the card issuing and driver / vehicle database management system, facilitate relevant concessions and prevent unauthorised usage. Drivers may register more than one vehicle on any one card but if they are driving an unregistered one at any time when needing to park, they can still access the MSCP by presenting their combi card at an entry terminal, instead of relying on the LPR system.

Another PC-based Parkeon programme, Varioflex™ Financial, monitors the pay on foot installations’ revenues using data downloaded directly from the pay stations and terminals to the system’s server from both multi-level car parks. A similar package, Parkfolio™ Financial, provides the same function for the P&D terminals, from which data are downloaded via a Jumbo hand-held terminal by attendants. The programmes output comprehensive financial and statistical information relating to the use of all the car parks at Cardiff UHW. This helps both external and internal management to review and develop the parking facilities.

In October 2006 the Smart Park card was introduced. This allows the parking system to gain a new level of sophistication since the driver can park and using a mobile phone can contact the parking centre, give out the required smart park card number, and not have to even leave the vehicle to use a pay and display machine. This has the effect of reducing queues and the amount of cash being handled and also allowed the introduction of more variable tariffs according to user and the time of day.

The system also incorporates a new number plate recognition system. During this period VINCI Park was awarded a 15 year contract to manage and operate the parking systems in place at the University of Wales Cardiff. VINCI Park has invested just under £9m into the parking system at Cardiff, improving infrastructure and introducing new systems and equipment.