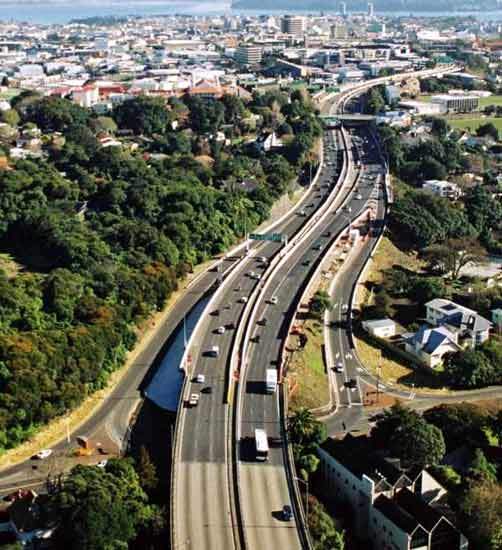 An overview of the Southern Motorway (SH1) looking north from the Gillies Avenue on and off-ramps. 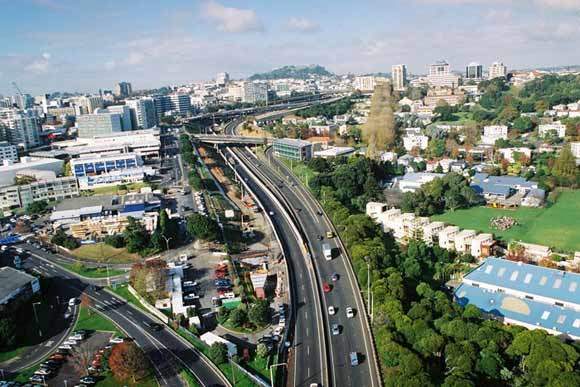 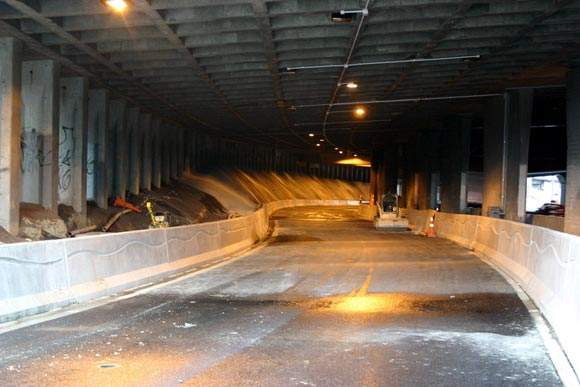 The new alignment on the North-Western Motorway to the Nelson Street off-ramp goes under Ramp-B before merging with the northern end of the old ramp. 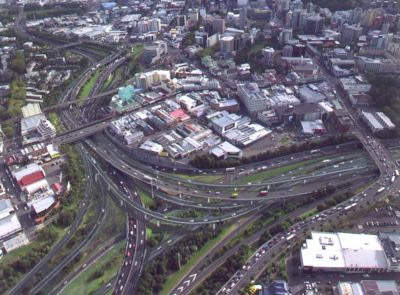 How the CMJ looks from the air. 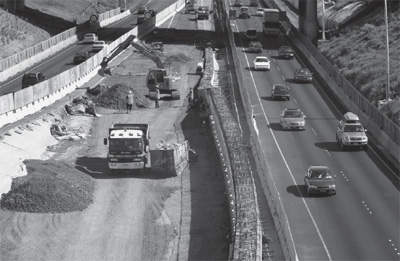 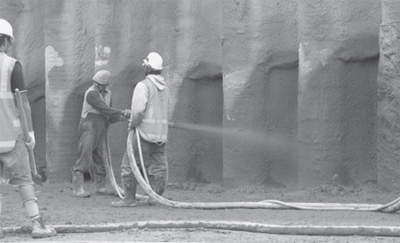 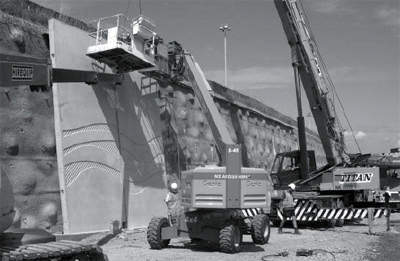 Construction is almost completed; here concrete panels are being installed. 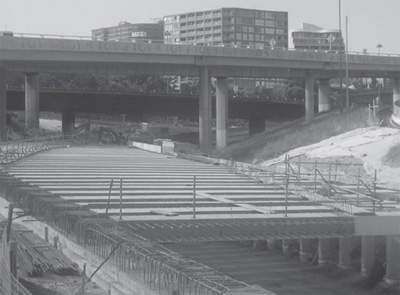 The deck of one of the northern sections, showing the cross beam structure. 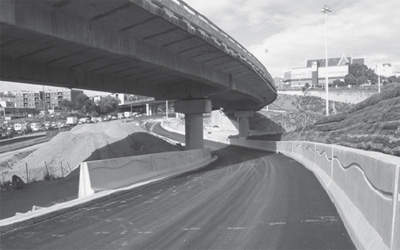 The Central Motorway Junction project in New Zealand will link the Northern Motorway to Auckland’s port and North-Western Motorway. The works on the project, developed in two stages at an investment of NZ$195m, began in October 2002 and were completed in December 2006.

Alongside establishing a link between the Northern Motorway and Auckland’s port, the project will ensure smooth traffic flow through the Spaghetti Junction interchange. Transit New Zealand, the state-owned road authority, which maintains the 10,894km of state highways in the country, sponsored the Central Motorway Junction project.

Background and design of the scheme

“The objectives of the project were to ensure safety standards and smooth traffic flow through the Spaghetti Junction interchange.”

Planning for the Auckland motorway system began in 1955 with the release of the master transportation plan by the Auckland Regional Planning Authority. During the 1970s, various components of the Central Motorway Junction were built to provide links to the north, south and north-west.

Prior to the projects, engineering company Sinclair Knight and Merz (also retained to advise on the design and engineering for phase two) was commissioned to produce a report on the CMJ and how it could be improved.

The report was able to highlight the problems and some strategic solutions. The report suggested:

The other two motorways under construction in Auckland, the South-Western and Upper Harbour motorways, now form a continuous link in the west of the city between SH1 in the south at Manukau with SH1 in the north at Albany. The route provides an alternative relief north–south route in the west that bypasses the central area and avoids the often congested CMJ.

Under stage one, carried out by Freeflow, the route between Symonds Street and the Gillies Avenue section of the Southern Motorway was upgraded. The $55m upgrade works under stage one took 26 months for completion from the commencement of construction in October 2002.

As part of the upgrade works, major emphasis has been given to safety on this route, including the addition of a further southbound lane and improved lane configurations. Stage one also included an extra road width to accommodate future improvements. The stormwater run-off treatment has been improved through a series of sand filters and catchpit filter bags to minimise surface flooding.

An extended merge area at the southbound Grafton on-ramp was provided to help heavy vehicles merge with the motorway traffic. A fourth southbound lane, by way of a two-lane off-ramp from Upper Queen Street to Gillies Avenue, has increased the capacity at the latter point for better queuing. A new northbound lane, from the Gillies Avenue on-ramp to the Khyber Pass off-ramp, was aimed at improving traffic flow.

The alignment of the Wellesley Street off-ramp northbound was also improved, including seismic performance and structural upgrades for the Khyber Pass Viaduct (widened to five lanes southbound and six lanes northbound), Grafton Bridge 2 and Grafton Bridge 3 A. Sufficient southbound carriageway width was provided to accommodate a future ramp from Khyber Pass to the Gillies Avenue overpass (widened to ten lanes).

Stage two was extended to include an upgrade of the Southern Motorway (SH1) southbound between the Cook Street off-ramp and the Hobson Street on-ramp. This extension work on the Southern Motorway southbound, known as the northern tie-in, has provided new links to exit from the SH1 on the left-hand side after the Cook Street off-ramp and before the Wellington Street Bridge.

The new links were designed to ensure smooth flow of traffic. The links will exit in a single lane from SH1 and then widen into two lanes so that slower traffic bound for the port can use the left lane. In June 2006 the new off-ramp from SH1 to Nelson Street was completed so that drivers can now exit the highway from the left, making it easier for drivers heading into the CBD. This involved the widening of the Southern Motorway northbound approach.

“The new links were designed to ensure smooth flow of traffic.”

Under a service contract, the main contractor engaged URS New Zealand Ltd to provide verification of the design, while sub-contractors were engaged to perform demolition, earthworks, pavements, landscaping, and traffic-control implementation. The engineering and design consultants were responsible for the development of the Central Motorway Junction (CMJ) project.

With Newmarket Viaduct, four lanes go into three towards the CMJ and it now needs to be widened because the traffic volume is nearly 100,000 vehicles per day. A new $142.7m project started in 2008 to build a northbound and southbound viaduct instead of the old one in five stages over four years (completion in 2011-12). The capacity will then be over 200,000 vehicles per day.

In February 2009, NZ Transport Agency appealed to its board for approval for funding the cost increase for SH1 New market Viaduct replacement project during its construction phase. The NZ board has approved a cost increase of $14.54m, taking the cost of project to $215.30m.

In a similar timescale, Victoria Viaduct (handling 95,000 vehicles per day) will be replaced by a partial tunnel in three stages of construction starting in 2009. The project which is expected to cost some $340m will be completed by 2014. The three northbound lanes will go through the tunnel connecting with the St Mary’s Bay section.

The existing viaduct will conduct the southbound traffic and also traffic to Cook Street and the North Western Lanes. The St Mary’s Bay section, which currently has eight lanes (140,000 vehicles per day) will now have ten lanes and will relieve congestion leading to the Victoria viaduct.

During April 2009, the work for delivering the first stage of new New market Viaduct in time for 2011 Rugby world Cup has initiated, along with NZ Transport Agency. The staged approach for constructing or deconstructing will improve the motorway capacity in time for the Rugby World Cup 2011. The project is expected to complete by 2012.