28km with the possibility of an extra 3km 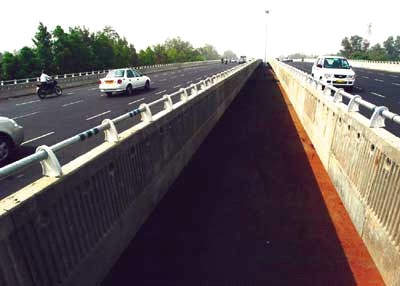 One of the flyover sections of the Delhi to Gurgaon expressway completed in late 2004. 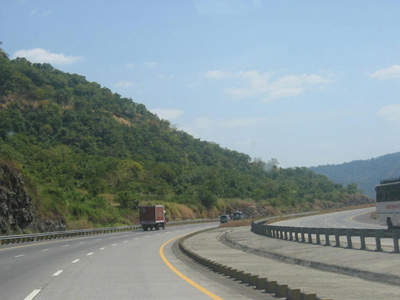 A section of the new expressway just outside Gurgaon. 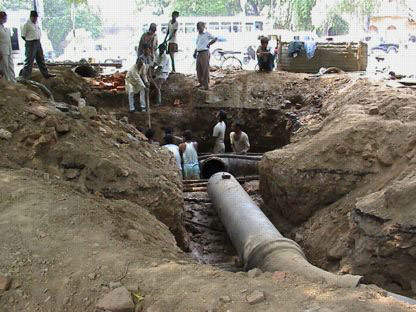 The road has required the rerouting of services and also the disruption of many businesses and homes. 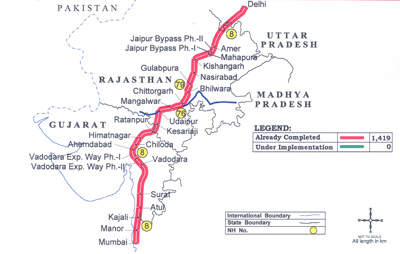 The route of the NH-8 of which the Delhi to Gurgaon expressway is part. 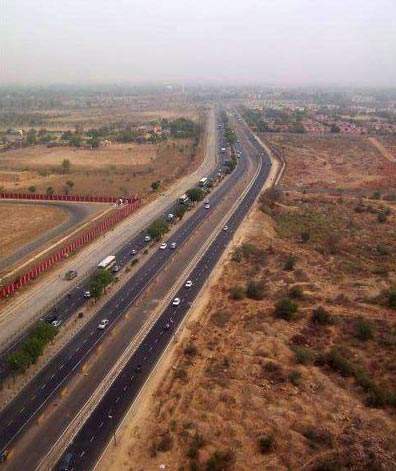 The expressway will provide excellent transport links in the region which is an important business area of India.

The 28km Delhi to Gurgaon expressway, opened in January 2008, is one of the most important road construction projects in India. The expressway connects both the domestic and the international airports to Delhi and Gurgaon.

The project comprises the widening and conversion of the Delhi to Gurgaon section of the National Highway (NH)-8 into a six- to eight-lane access-controlled highway on a Build, Operate, and Transfer (BOT) basis.

The Delhi-Gurgaon region has the highest density of vehicles in India. As a commercial hub of Northern India, it is already on one of the busiest traffic arteries in the National Highways network. The highway provides important links to the western ports and the North Indian markets, as well as the newly developed townships and localities such as Dwarka.

Delhi has one of the highest per capita incomes in India and also has the largest number of motorised vehicles. The Delhi–Gurgaon section of highway carries more than 180,000 passenger car units a day and this is likely to increase by over 7% per annum.

This project is actually part of the larger Golden Quadrilateral (GQ) Project, which is the largest expressway project in India. It is the first phase of the National Highways Development Project (NHDP), and consists of building 5,846km of four- to six-lane expressways connecting Delhi, Mumbai, Kolkata and Chennai on the northern, western, eastern and southern parts of India.

The 28km road section was originally planned to begin at Rao Tula Ram Junction in Delhi (14.3km) and end at Manesar, on the outskirts of Gurgaon (42km). Later, it was extended by 3km due to a design change which incorporated a new eight-lane section from Dhaula Kuan to Rao Tula Ram Marg. The project road lies partly in Delhi (between 14.3km and 23.96km) and partly in Haryana (between 23.96km and 42km).

The project, which started construction in June 2003 and had been delayed more than once due to legal problems over land acquisition and compensation for buildings having to be demolished, finally opened to public on 23 January 2008.

This project was awarded to the consortium of Jaiprakash Industries Ltd (JIL) and DS Construction Ltd (DSCL) and was implemented by Jaypee DSC Ventures Ltd, a SPV Company formed for the purpose.

The project was awarded on the basis of a negative grant, where project contractors have actually agreed to pay the Government Rs610m for the right to operate the toll access to the new expressway. M/s Rites Ltd and Sheladia LR Kadiyali are an Indian-US joint venture also involved in the construction of parts of the expressway project.

The finance for the road project was arranged by SREI International Finance Ltd and the cost is estimated at Rs10bn.