Thales-OMEK for Epirus, Parsons-Salfo for West Macedonia and Scetauroutes-ADO for Central and East Macedonia (Three International Consortia of Management Companies)

Contractors for the Final 165km 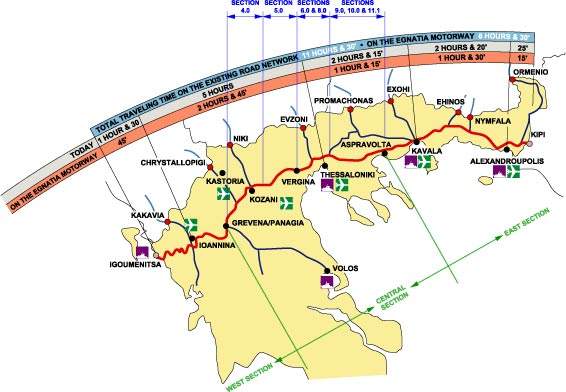 The 680km Egnatia Motorway, when completed, will run across Northern Greece from its starting-point at Igoumenitsa, across the Prefectures of Thesprotia, Ioannina, Grevena, Kozani, Imathia, Thessaloniki, Kavala, Xanthi, Rodopi and Evros, to the village of 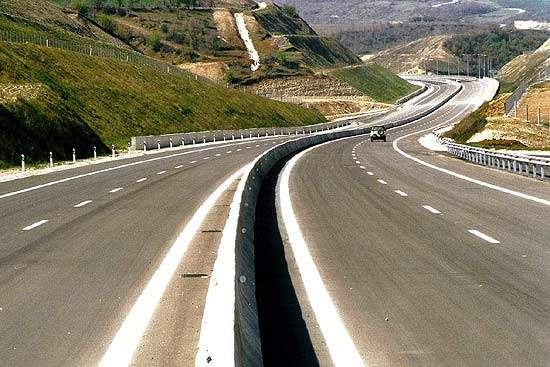 The highway is a 24.5m-wide dual carriageway with two traffic lanes and an emergency lane in each direction. 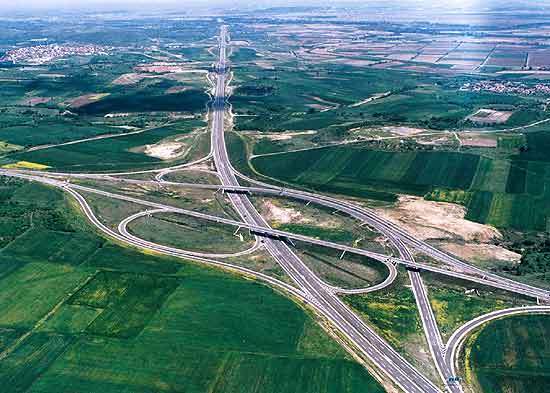 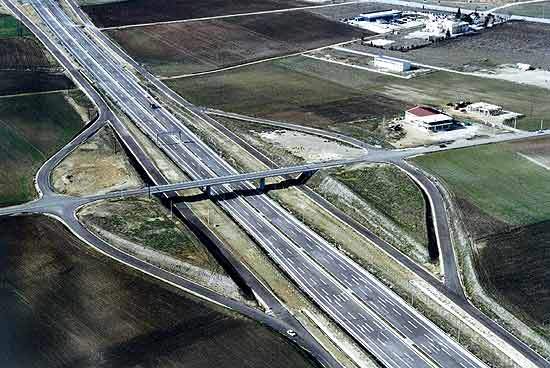 By the time of its completion, the Egnatia Motorway will have some 1,650 bridges and small structures along its length, totalling 40km and 20% of the total project cost. 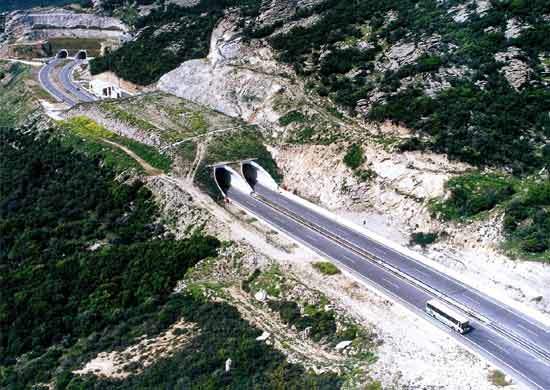 49.5km of the entire Egnatia Odos will be underground in a total of 69 twin bore tunnels. Standard tunnel design along the highway provides for two traffic lanes, each 3.75m wide, with a maximum clearance of 5m. 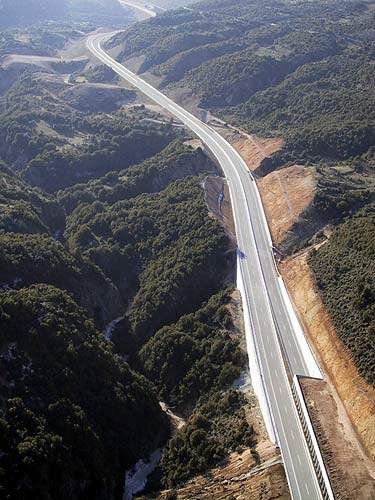 As part of the European Intercontinental Transportation Network, the Egnatia Odos motorway will also be a collector route for the Balkan and South-eastern European transport system. 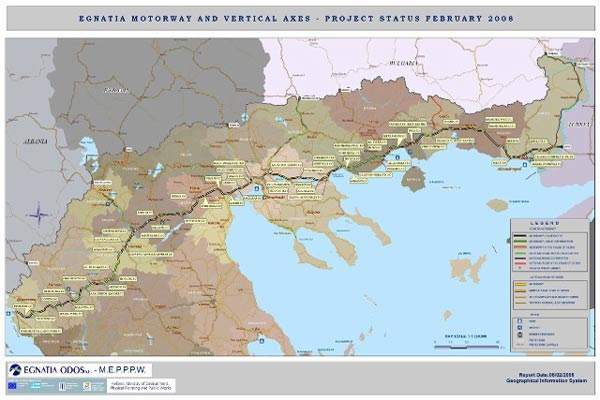 As of February 2008, the Egnatia Odos motorway is nearing completion. 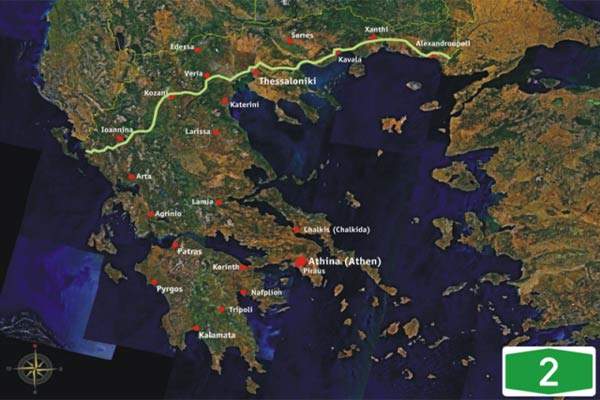 The Egnatia Odos motorway is one of the largest and most ambitious civil engineering projects in Europe.

The 670km Egnatia Odos – which translates as Roman Road – motorway is one of the largest and most ambitious civil engineering projects in Europe at the current time. The motorway runs across Northern Greece from its starting-point at Igoumenitsa, across the Prefectures of Thesprotia, Ioannina, Grevena, Kozani, Imathia, Thessaloniki, Kavala, Xanthi, Rodopi and Evros, to the village of Kipi on the Turkish border. The road is a key route in developing the trans-European road network and forms an integral part of European route E90.

It follows (approximately) the route of the old Roman road, the Via Engatia. Designed to the specifications of the Trans-European Road network, it is a 24.5m-wide dual carriageway with two traffic lanes and an emergency lane in each direction. Nine major vertical axes connect the motorway with Albania, FYROM, Bulgaria and Turkey. The Egnatia Odos is served by 720km of service roads.

50% of the Egnatia Odos’s estimated €6.77bn cost was spent on only 90km of the finished route: the bridges and tunnels. Over 1,700 structures are dotted along the road, comprising 76 tunnels with a combined single bore length of 99km and 1,650 bridges with a combined length of 40km.

On top of this, there are 43 river crossings, 11 railway crossings and 50 interchanges with existing roads.

The whole project was divided into three sectors (western, central and eastern), with a construction manager and three international consultant companies overseeing the construction of each. The motorway was constructed by a consortium called Egnatia Odos.

In the period from February 2000 to early 2006, 480km of the motorway was opened and there were 165km of motorway sections to be constructed. The project was completed and opened to traffic in 2009.

In addition, works were completed on the vertical axes (Siatista–Kristalopigi, Thessaloniki–Serres–Promahonas, Thessaloniki–Moudania and Ardanio–Ormenio) and the cross border linkage under eight contracts budgeted at €511m.

The finished Egnatia Odos forms the backbone of the Northern Greece’s transport system and links the country to other Balkan countries (Albania, FYROM, Bulgaria and Turkey) through nine major vertical axes. It also connects four of the country’s major ports (Igoumenitsa, Volos, Thessaloniki, Kavala and Alexandroupoli) and six of its airports (Ioannina, Kastoria, Kozani, Thessaloniki, Kavala and Alexandroupoli).

“49.5km of the entire Egnatia Odos is underground in twin-bore tunnels.”

As part of the European Intercontinental Transportation Network, the Egnatia Odos motorway is also a collector route for the Balkan and south-eastern European transport system.

Tunnels on the Egnatia Odos motorway

49.5km of the entire Egnatia Odos is underground in a total of 69 twin-bore tunnels, a necessity that consumed 30% of the project’s total cost. The majority of the tunnels were bored with the rest (only 4.5%) constructed using the cut and cover method. Of the 76, only 15 are longer than 800m with the longest (the Driskos Twin-Bore Tunnel) measuring 4.7km. Arcadis constructed the 800m T8 tunnel.

Most of the tunnels are located in Epirus and in Central and Western Macedonia where the road passes through the Pindus Mountains. However, there were geological problems and environmental concerns which required the route to be adjusted slightly. The tunnel design had to be redone and on the Grevena to Ioannian section there was a concern over the habitat of the endangered brown bear being destroyed. The Western Region has a total of 26.6km of road tunnels, the Central Region 19.6km and the Eastern Region 3.3km.

The standard tunnel design, with a 120-year design life, was employed along the Egnatia Odos provides for two traffic lanes, each 3.75m wide with 1.25m pedestrian sidewalks and a maximum clearance of 5m. Underground emergency parking and turn-around points vary according to the length of the tunnel and the anticipated traffic volume but virtually all tunnels feature cross passages between the eastbound and westbound tunnel bores every 350m and emergency vehicle cross passages and parking areas every 1,000m in case of a fire or other emergency. Reinforced concrete provides the final tunnel lining which is separated from the rock by a drainage system that keeps the tunnels dry.

Advanced air-quality sensing and ventilation systems were installed both to monitor and maintain general air quality and extract smoke in the event of a fire. The highway-wide telematics system is also present within the tunnels to ensure their safe and economic operation. There are sophisticated electronic surveillance measures, SCADA controls for the lighting, fire detection and tunnel ventilation systems and also advanced vehicle collision absorption measures in the tunnels.

Bridges on the Egnatia Odos Motorway

By the time its completion in 2009, the Egnatia Motorway had 1,650 bridges and small structures along its length, totalling 40km and 20% of the total project cost. These structures feature many different designs as there were a large variety of bridges built: 205 bridges; 100 overbridges; 235 underpasses and 1,110 culverts.

The major bridges are as follows:

Pre-stressing of these bridges is longitudinal (transverse in some cases) and support piers are generally hollow (monolithic or with bearings). Continuous decks with stable or variable structure height were prioritised and abutments are separated from the decks with either sliding or elastomeric bearings.

The majority of the bridges built are in the Central and Eastern regions (222 and 262 respectively) although the average length of bridges is longest in the West Region at 121m for 86 bridges. The major bridges of Egnatia Odos are mainly in the West Region.

“Egnatia Motorway has 1,650 bridges and small structures along its length.”

Delcan was chosen as the ITS coordinator and provided engineering services for the planning and preliminary design of intelligent transportation systems for the deployment of traffic management, telecommunications, toll collection and motorist advisory systems. An open architecture system was developed to allow integration with the highway’s existing ground transportation facilities as well as future technology upgrades and to enable the system to be refined as operational experience and traffic management needs are realised.

RTMS traffic-counting stations, which include RTMS multi-zone, radar-based vehicle detectors, provide data to assist with network planning and operational issues. EIS Electronic Integrated Systems delivered and installed six RTMS traffic-counting packages on the Egnatia Motorway near Thessaloniki. In this application, the units were mounted on existing lighting poles providing detection in up to three lanes of traffic.