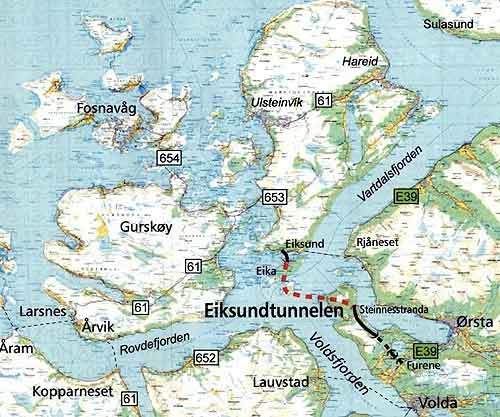 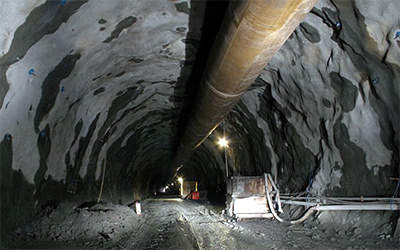 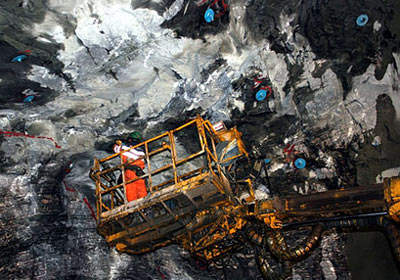 Engineer on a gantry carrying out a survey of the tunnel ceiling. 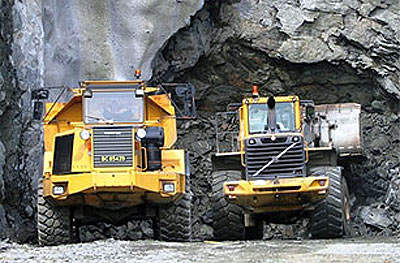 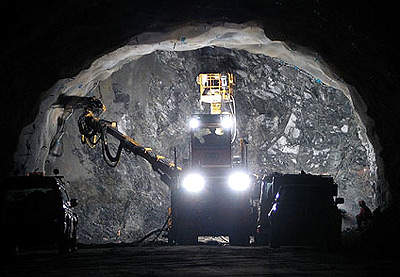 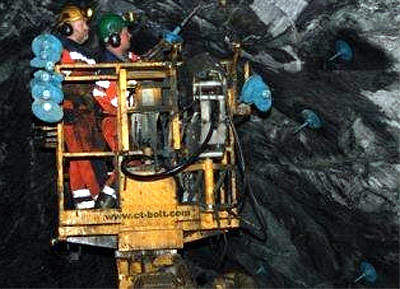 CT bolts being placed to support tunnel walls and ceiling.

The Eiksund Tunnel is part of the Eiksundsambandet project, a fixed link between the Norwegian mainland and Hareidlandet Island, off the More og Romsdal county coast. From Hareidlandet Isle the new link begins in the town of Eiksund with a short bridge joining the Eika Islet. Two other associated structures to complete the route were constructed along with the undersea tunnel. These were the 405m (1,329ft) long Eiksund Bridge and the 1,160m (3,806ft) long Helgehorn Tunnel (also a part of Riksvei 653).

From here, a 7,776m long undersea tunnel connects Eika Islet with Yksnøya Islet, before going deep under the Vartdals Fjord to finally connect with the Berkneshalvøya peninsula on the mainland.

“The Eiksund crossing will shorten distances between the municipalities of Hareid, Herøy, Sande and Ulstein and the mainland towns of Ørsta and Volda.”

The tunnel was opened to traffic on 23 February 2008. The tunnel was originally intended to be opened to the public in July of 2007, but numerous delays pushed the date back to December 2007 and then eventually to 2008. The total cost of the project was around NOK846m. Of this, the tunnel has cost NOK500m. The Norwegian Public Roads Administration was the government body who ordered the road project and will be responsible for its operation and maintenance.

The Eiksund crossing will now shorten distances between the municipalities of Hareid, Herøy, Sande and Ulstein and the mainland towns of Ørsta and Volda (a total of 22,000 people). The total length of the new road will be 14.88km.

The Eiksundsambandet also includes two shorter tunnels on the mainland in Helghorn (1,160m) and Morkaås (630m). Upon completion, the Eiksund–Rjåneset ferry line was closed.

The tunnel carries three lanes of traffic. The average daily traffic through the Eiksund Tunnel is around 1,000 vehicles, 50% of which are trucks. At one point, between the tunnel’s deepest point and Eika Inlet the gradient is 9.6%.

According to the European Union (EU), a tunnel gradient should not exceed 5% but in Norway, which is not a member of the EU, gradients can reach 10%. This steep gradient may deter some drivers, as has been seen with the Oslo Fjord Tunnel where some drivers opt to drive round the fjord or take the ferry rather than the tunnel – and the Oslo tunnel’s gradient is only 7%.

The 7,765m long Eiksund road tunnel is, to date, the world’s deepest undersea tunnel, reaching a depth of 287m below mean sea level at its deepest point.

Mesta, the general contractor, used the drill and blast method for the tunnel, using two attacks with one jumbo on each drive. The jumbos (AMV 21SGBC-CC) were supplied by AMV. They were fully computerised, capable of a coverage area of 11m x 17m and equipped with three booms and basket, 5.5m feeders and Montabert HC 109 drifters. The tunnel was first broken through on 1st February 2007 at a depth of 245m.

The drill bit diameter was 48mm and for long-hole drilling, injection and survey, they used 64mm bits. The drill bits were Sandvik CAPP bits. Explosives used at the site were SSE emulsions (Slurrit) from Dyno Nobel.

At each end of the tunnel 4–8 Volvo 330 dump trucks were used for rock removal. A total of 660,000m³ of rock was blasted, representing about 50,000 truckloads. This is enough to fill a football stadium with a 175m high dump.

Point anchored bolts and sprayed concrete with fibres were used for support. Ørsta supplied the CT bolts, while the steel fibres (Bekaert Dramix) were supplied by Rescon Mapei. As with all undersea tunnels, salt water seepage tends to be corrosive and for long life, special rock bolts need to be used. Throughout Norway CT Bolts are almost always specified for undersea tunnel sections as they are designed to have a 50 year life in aggressive environments.

Other statistics for the tunnel include: 5 million blast holes; 45,000 probe holes to investigate the ground, in particular in search for water; 40,000 injection holes to seal leaks or stabilise poor ground; 1,600t of cement; and 1,300t of explosives for 1,800 blasts.

Also used onsite were AMV’s new computerised grouting system, three injection lines with pressure level up to 200 bar (one at each drive).