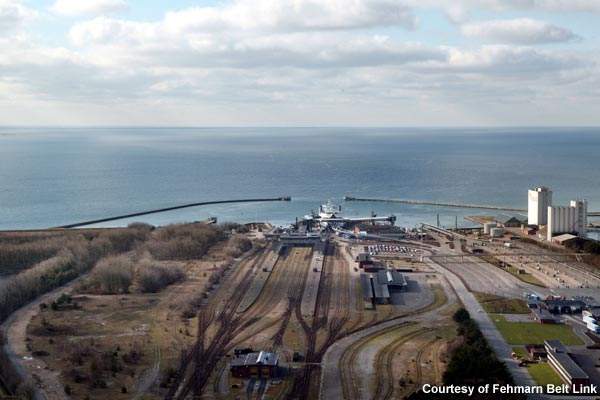 Existing rail facilities and ferry port at R&#248;dby in Denmark. 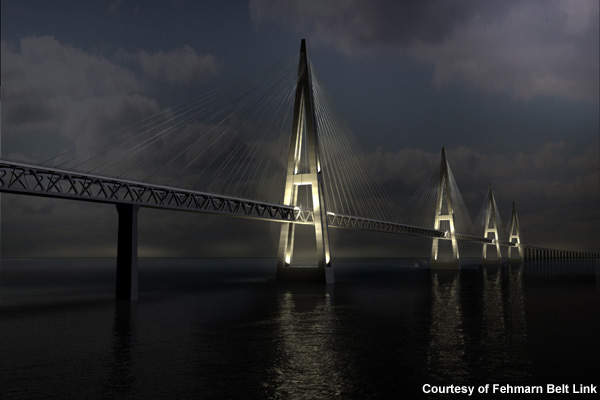 Computer image of a cable-stayed bridge at night. 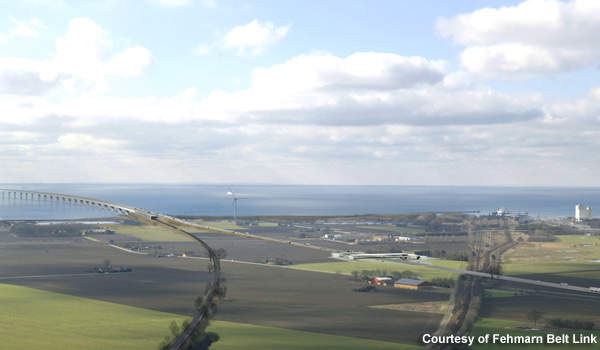 Computer animated photo of proposed alignment at R&#248;dby in Denmark. 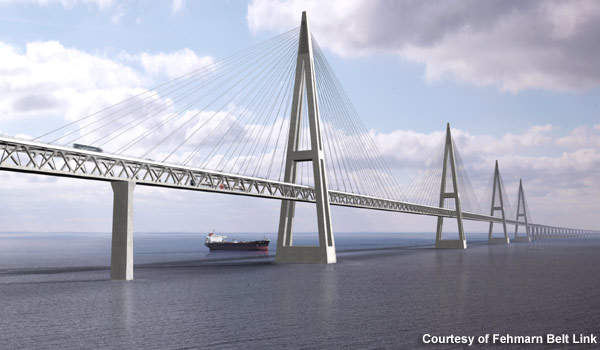 Computer image of a cable-stayed bridge across Fehmarnbelt.

The Fehmarn Belt link is scheduled to bridge the gap in the Northern Europe economic straits. Connecting cities of Stockholm, Copenhagen, Hamburg and Berlin, the fixed link is slated to be the largest infrastructure project in Europe, with a predicted life span of around 100 years. Along with Oresund and Great Belt bridges, the Fehmarn Belt link will connect the missing link in the Central European corridor.

Initial geological and environmental investigations to determine the fixed link have been initiated after the Fehmarn Belt link treaty was signed by Ministers of Transport of Denmark and Germany in early September 2008. Danish Folketing has already approved the project with German Bundestag to follow suit in the later part of 2009. The fixed link will connect Rodby, Lolland in Denmark to Puttgarden, Fehmarn in Germany and replace the existing Scandlines operated ferries.

The preferred design is a cable-style bridge. An immersed tunnel is considered as a technical alternative. The project consists of a double-track electrified rail line and a four-lane motorway that will enhance connectivity across the Baltic Sea region.

“The project consists of a double-track electrified rail line and a four-lane motorway that will enhance connectivity across the Baltic Sea region.”

According to 2008 estimates, the project will cost DKK 33bn (€4.5bn) to be wholly financed and operated by Denmark. It will also guarantee loans that are to be repaid in 30 years through revenues collected as user-charges.

Germany will renovate its existing infrastructure as part of the treaty. In addition to subsidies by the EU, the project has also received funding through TEN-T [Trans-European Network-Transport] programme that amounts to 25% of the budget for the period 2007-2013.

The Danish government has established Fehmarn Belt, a subsidiary of the state-owned Sund & Bælt Holding, to investigate and design the coast-to-coast link. Later, the Fehmarn Belt Company will construct and operate the link. The fixed link will either be a 19km cable-stayed bridge estimated at €4.5bn or a 20km immersed tunnel at €5.5bn.

The dimensions of a bridge project will exceed the Oresund Bridge by 50%. Therefore, the conservationists are as critical about the impact of the project on the environment as the engineering consultancies on the scale of innovation the project would demand.

According to NABU (German Nature Protection Society), the bridge would obstruct 90 million migratory birds every year, and damage the Baltic region’s eco-system. The seal sanctuary at Rødsand is also in the vicinity of the project.

According to EU’s EIA [Environmental Impact Assessment] Directive, the project will initially study its impact on the environment. In areas designated as wild life habitat, a Natura 2000 impact assessment would be carried out. The project will benefit with the substratum of the Baltic Sea familiar to Danish bridge builders with similar structures at Oresund and Great Belt fixed lines. The environmental assessment report will be finalised in 2011.

“The bridge would obstruct 90 million migratory birds every year, and damage the Baltic region’s eco-system.”

Additionally, geotechnical investigations including EIA (environmental impact assessment) are carried out to study and choose the fixed link. In 2012, decisions on design and alignment of the structure would be approved by Danish and German authorities. In Denmark, final approval will be given through the passing of a Public Works Act by Folketing.

Financing for the project

Denmark will wholly fund and operate the project. The revenue would be generated as toll charges from road and rail operators. As a crucial link in the Northern-EU corridor, the link has qualified as a priority project under the EU’s TEN-T [Trans-European Transport Networks].

About DKK 2.5bn has already been sanctioned by the EU for 2007-13, with additional funding available through the next cycle. EU subsidies extend to financing 50% cost for feasibility studies, 24% construction costs and 7% indirect expenses.

The project has also received DKK 170m for the same period under Interreg IV from EU.

The bridge would have four lanes on the top deck and two electrified rail tracks at the lower deck similar to Oresund Bridge.

The navigation span of the main bridge is yet to be assessed for navigational safety and may affect the bridge design. Considering the size of the cable bridge, this project seeks major players in the floating cranes industry with the capacity to shift such large bridge spans.

the immersed tunnel is proposed to comprise two approach ramps and ventilation islands. Of the four tubes, two would contain motorway lanes while the other two tubes accommodate one rail track each. The rectangular cross section would be 41 metres wide and 10 metres high. A 1.5 metre-wide service gallery is envisaged between railway and motorway tubes.

“The rectangular cross section would be 41 metres wide and 10 metres high.”

In November 2007, Denmark upgraded E47 section between ønslev-Sakskøbing, extending the entire stretch between Rødby and Copenhagen as a four-lane motorway.

In addition, Denmark will also electrify rail line between Ringsted and Rødbyhavn, extend Vordingborg-Storstrøms Bridge and convert Orehoved to Rødbyhavn into a double track. Construction works in Denmark would cost €900m.

On its part, Germany is to extend the B207 (E47) road link between Heiligenhafen and Puttgarden into a four-lane major road, electrify the 89km existing rail line between Lübeck (Bad Schwartau) and Puttgarden and upgrade it into double track within seven years of operating the link. German construction works are to cost €900m and will be funded by the government.

In the immediate approach area to the fixed link, the four-lane highway will be continued as a four-lane motorway towards Denmark.

Benefits of the fixed link

The link will replace energy consuming ferries and cut the travel time between Hamburg and Copenhagen by one hour. The rail sector is to save €50m per year as the Fehmarn belt link is 160km shorter than the present route via Jutland, Funen and Storebælt.