Refurbishment of the ramps and substructures connecting the bridge 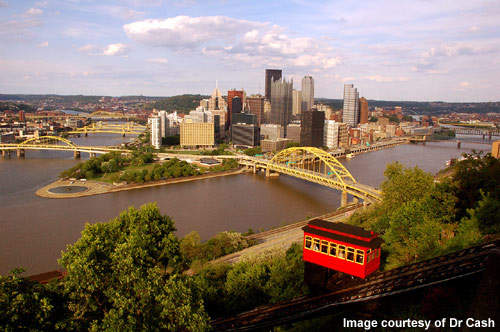 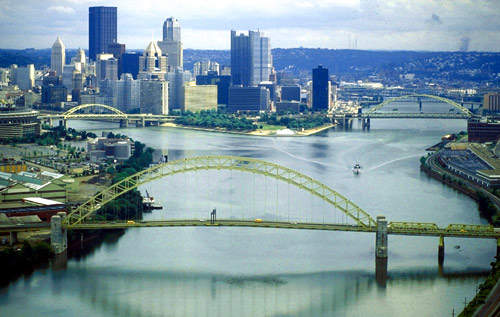 The upstream river in Pittsburgh

Fort Duquesne Bridge is a double-deck steel bowstring arch bridge crossing the Allegheny River in Pittsburgh, Pennsylvania. It carries the I-279 highway with eight lanes (four on the upper deck and four on the lower deck). About 41,500 and 39,000 vehicles traverse the northbound upper deck and the southbound lower deck of the bridge every day.

The bridge was constructed during 1958-1963, and is maintained by the Pennsylvania Department of Transportation (PennDOT).

The bridge was named the ‘Bridge to Nowhere’ as its northern ramps hang mid-air without any connection to the northern section of the I-279 (North Shore Expressway). In October 1969, the bridge was opened for the public when the construction of the northern approach ramps connecting the north side of the river, were completed. After its opening, the predecessor Manchester Bridge was closed with demolition works beginning in 1970.

In 1969, the bridge allowed access to Pennsylvania Route 65. The northern approach ramps connected the northern section of the I-279. The I-279 and I-376 from the 10th St Bypass are connected by the southern ramps of the bridge.

“The Fort Duquesne Bridge preservation project includes the renovation of 16 bridge and ramp structures interchanging with the bridge.”

The bridge is 921ft long with its main span extending to 400ft clearance between the two piers. The deck is at a height of 46ft.

The American Recovery and Reinvestment Act (ARRA) has sanctioned $1.026bn as a federal recovery initiative to preserve and renovate the infrastructure in Pennsylvania. In addition, PennDOT has released $1.8bn for improvement projects in 2009.

The Interstate 279 Fort Duquesne Bridge preservation project is the second among the nine projects to be funded by the ARRA initiative..The first project is the Route 22/30/60 interchange project in Robinson Township in Allegheny County.

The Fort Duquesne Bridge preservation project includes the renovation of 16 bridge and ramp structures interchanging with the bridge. The project is expected to be completed in 2010.

New latex overlays will replace the existing overlays to extend the life of the concrete decks of the bridge. The painting works will be administered on areas beneath the leaking dams/troughs, interiors of the steel box beam structures and the interiors and exteriors of areas of steel repairs.

Works to be taken up under steel repairs are the replacement of steel diaphragms of the floor system, retrofits to intersecting welds in tension areas, removal of tack welds on the built-up plate girders and repairs to cracked box girder webs. Expansion dam replacements involve the removal and replacement of the failed sliding plate dams with neoprene expansion dams.

“The bridge is 921ft long with its main span extending to 400ft clearance between the two piers. The deck is at a height of 46ft.”

Concrete decks and substructures at various locations have spalled and delaminated concrete. Such structures will be removed and replaced with concrete to extend their life. In addition to latex overlays the concrete decks and barriers will go through minor concrete repairs.

Rocket bearings will be replaced along with the replacement of the expansion dams for accurate movements and to correlate to the movements of the structures. Minor repairs will be done to the highway lighting system attached to the interchange ramps and to the drainage system.

The preservation works of the bridge will be phased out based on latex operations and will be carried out during non-event weekends. The renovation will be taken up as half width construction made feasible by the large width of the ramps and the geometry of the interchange of the bridge. Except for latex replacement, expansion dam replacements, rocker bearing work and some steel and concrete deck repairs, no other repairs will impact the flow of traffic.

The works will be taken up with multi-phases of traffic control. Complete closures of the route and detours are planned to ensure the safety of workers and travelling public.

In June 2009, PennDOT has announced that the contract worth $23.3m to preserve the Fort Duquesne Bridge and many other ramps in Pittsburgh was awarded to Trumbull: a general contracting and construction management services company. The work will begin in early August and is expected to be completed in 2010.