New road bridge over B3 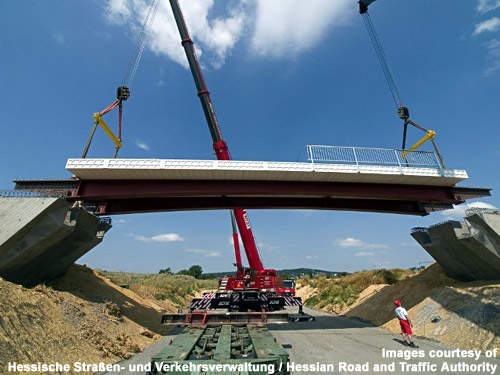 Installation can be carried out quickly. 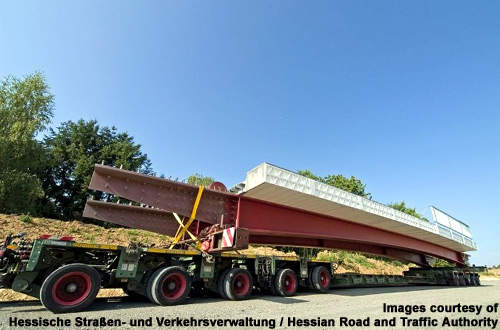 The bridge is prefabricated and transported to the location. 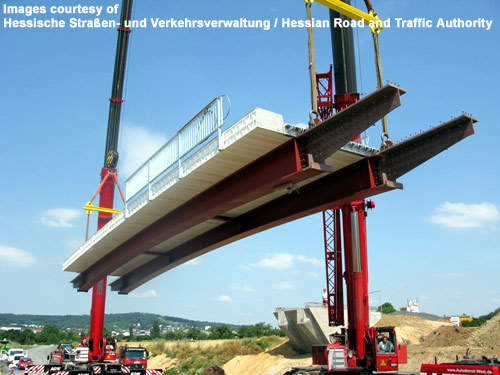 The deck is hoisted into place with the minimum of disruption. 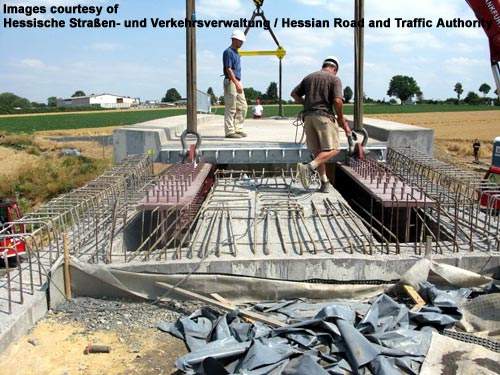 The deck can then accept the paved surface for completion.

When installing new bridges one of the most crucial considerations is the proper and regular maintenance of the structure. Corrosion can be a big problem and bridges have to be inspected regularly to remain safe.

The system has been used twice before in the UK – in 2002 for the Westmill Road bridge in Oxfordshire and in 2006 for Mount Pleasant Bridge crossing the M6 in Lancashire, which was installed by the UK Highways Agency and which won the National Institution of Highways and Transportation award 2007.

The first FRP road bridge in mainland Europe is the Friedberg Bridge constructed over the new B3 Highway at Friedberg, near Frankfurt, Germany.

The bridge was installed for the Hessian Road and Traffic Authority (Hessen State Highways Agency) in September 2008. Some of the bridge’s advantages include rapid installation, low maintenance costs and high corrosion resistance. An estimated 70% of German road bridges were constructed of concrete more than 40 years ago, and their maintenance is becoming more of a burden.

The Friedberg Bridge is 21.5m long and consists of two steel beams covered by a new pultruded multicellular deck made of ASSET (Advanced Structural Systems for Tomorrow’s Infrastructure) profiles from Fiberline Composites. The bridge elements are clad with a polymer concrete material to resist weathering.

A big advantage of the system is its low weight, so the bridges can be pre-assembled or prefabricated in far longer lengths than their corresponding steel or concrete structures. German bridges that carry heavy traffic are subject to span limitations, so to achieve the necessary load-carrying capacity, either carbon composite, which is expensive, or a combination of fibre-reinforced polymer and steel can be used.

The German bridge is a lightweight structure that was assembled adjacent to the highway and then lifted into position with only the minimum of disruption to traffic. Knippers Helbig Consulting Engineers were responsible for the design element of the project.

The Freidberg Bridge serves a small country lane over a federal road covering a span of 21.5m. A hybrid fibre-reinforced polymer option consisting of two steel girders covered by a pultruded multi cellular deck with both components adhesively bonded together gives a composite action, which reduces the vertical displacements by about 20% compared to when steel stringers are used alone.

The entire deck was prefabricated with no cast in situ concrete edge beams for the anchorage of guard rails. The installation time was minimal and there were no rest periods for curing of in situ concrete or wearing.

The traffic speed over the bridge has been limited to 50km/h, making guard rails unnecessary. A marginal strip with a kerb is used, which is formed from a second layer of fibre-reinforced polymer glued onto the deck.

This enables a smooth load transfer of horizontal shock from kerb to deck. The design left out structural components that require maintenance or have a limited service life, such as expansion joints and elastomer bearings.

The bridge deck has a frame structure, which meant that the cross-section of the superstructure was able to be reduced and consequently the vibrations of the light bridge deck were reduced. The reinforced fibre bridge deck has no cut-outs or holes for bolts (girders are bonded directly to the composite material), which guarantees that its stiffness is not compromised and reduces the time for assembly and installation.