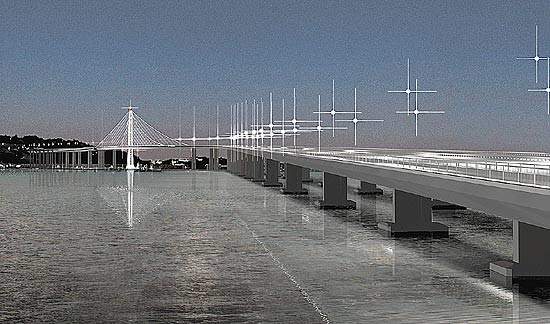 A view of the new eastern span of the San Francisco-Oakland Bay Bridge from the shore. 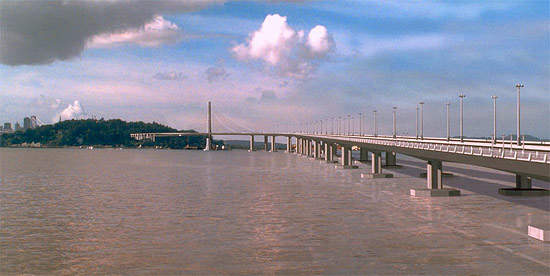 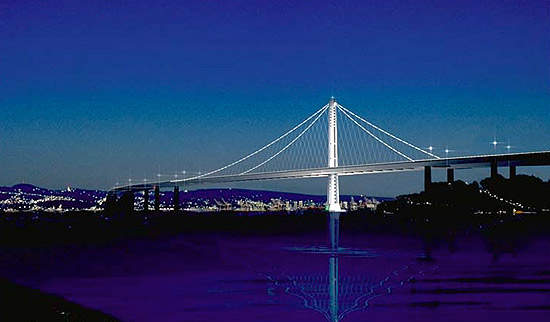 View of skyway from Oakland. 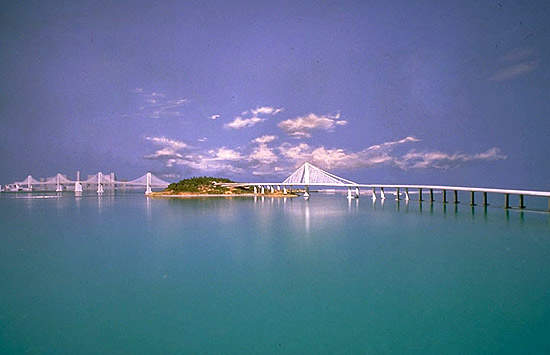 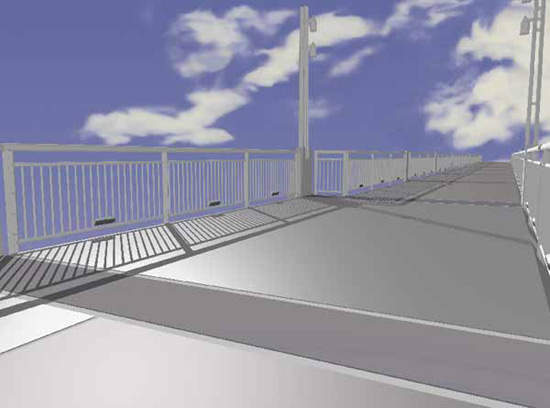 A view of the suspension system at night. 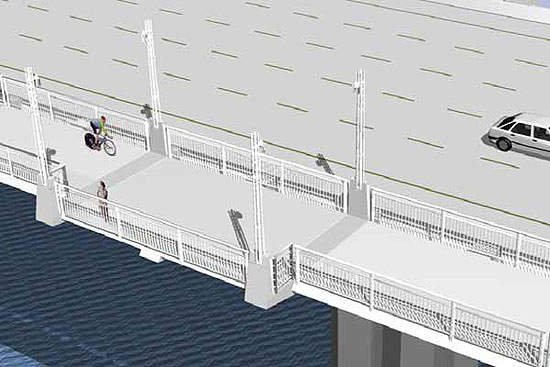 The San Francisco-Oakland Bay Bridge, also known as the New Bay Bridge, opened its eastern span for traffic in September 2013 on the Labor Day.

With an estimated total cost implication of $6.3bn, the bridge project is one of the largest public works projects ever undertaken in the history of the US. The project also gained distinction as an engineering marvel.

The Bay Bridge which was originally built in 1936 was closed for repair after the earth quake in 1989 struck its upper and lower deck at one pier. The damaged bridge required a long-term solution involving the retrofit of its West Span and replacement of its East Span.

In 1998, the San Francisco Metropolitan Transportation Authority (acting as the Bay Area Toll Authority) approved a single-tower, self-anchored suspension design for the main span of the new east half of the San Francisco-Oakland Bay Bridge. However, the project was considerably delayed, leaving the earthquake-vulnerable bridge in situ.

The construction work finally began in February 2002 and required 100,000t of steel. The bridge has been designed to last for 150 years. The seismic retrofit work of the approximately one mile West Span that lies between Yerba Buena Island and San Francisco was completed in 2004.

The replacement of the East Span of the bridge was initially scheduled for completion by 2007, but it took longer than expected as the project involved complex technical challenges.

The western span of the bridge was named as Willie L. Brown Jr. Bridge in September 2013.

In October 2000 the project was reinvigorated by the intervention of two federal agencies, and the American Department of Transportation decided to transfer land to the State of California from the US Navy. The uncertainty over the right of way on this land had held the project back by several months. The Army Corps of Engineers further bolstered the project by coming down in favour of a new, rather than a retrofitted bridge, as being less vulnerable to earthquake damage.

The project was prompted by studies carried out after serious earthquakes in 1989. These concluded that the eastern span of the San Francisco-Oakland Bay Bridge, unlike the western, could not be expected to withstand the scale of earthquakes that were likely to affect it. In March 1997, a design team was set up to tackle the problem. Recommendations went forward from this ground in June 1997.

T.Y. Lin International/Moffat & Nichol Engineers won the contract for further work in late 1997. The present scheme was only decisively adopted in July 1998 and finally broke ground in March 2002. The east span of the San Francisco-Oakland Bay Bridge witnessed a series of seismic advances, from steel piles deep in the ground to the 600ft shock absorber and main tower. The tower’s strength comes from its four legs, linked by a network of steel beams, which would take the brunt of most quakes. These links can be replaced while the bridge is operational.

The 2.2 mile east span connects Oakland and Yerba Buena Island. It comprises of two sections – a 2,047ft long Self-Anchored Suspension (SAS) bridge with a 525ft tall tower which is the world’s longest SAS bridge, and a 1.2 mile long elevated skyway viaduct. The skyway is constructed with 452 precast concrete bridges.

“The western span of the bridge was named as Willie L. Brown Jr. Bridge in September 2013.”

The SAS bridge is self anchored with nearly one-mile long main cable whose diameter is 2.6ft.

A temporary bridge was built to hold up the roadway of the permanent span into which the main cable was anchored first.The bridge includes two parallel roadways termed upper and lower decks and feature five lanes each. The lanes have 3.048m wide shoulders and feature an asymmetric design to allow easy traffic movement.

The bridge also includes a separate cantilevered bicycle path. Scaffoldings or travellers were constructed under the decks to withstand strong wings. The largest traveler measures 4.97m wide and 36.33m long.

The east span includes 273 light poles and more than 48,000 individual LEDs. The LED lights accentuate the design of the main tower and are placed in the direction of travel.

The project was paid for from extra toll money levelled on San Francisco’s toll bridge. The extra toll was a dollar and was proposed to be levied over eight years. In conjunction with selecting a design for the new east span, MTC/BATA approved extending the seismic retrofit toll surcharge by approximately 15 months to generate an estimated $141m to pay for the amenities to the new east span – $91m, or nine and a half months of surcharge proceeds, for the incremental cost for including a self-anchored suspension component, and $50m, or five months of surcharge proceeds for the bicycle/pedestrian path.

The American Bridge and Fluor Joint venture was the constructor of the bridge. The skyway was constructed by the Kiewit-FCI Mansion joint venture. The scaffoldings or travelers under the deck were constructed by Westmont Industries. The light poles on the east span were designed by Moffat & Nichol and fabricated by Valmont Industries. The light fixtures were designed and manufactured by Musco Sports Lighting.

The LED lighting design was developed by Caltrans, Zoon Engineering and Parsons Brinckerhoff. The LEDs were installed by Bleyco.