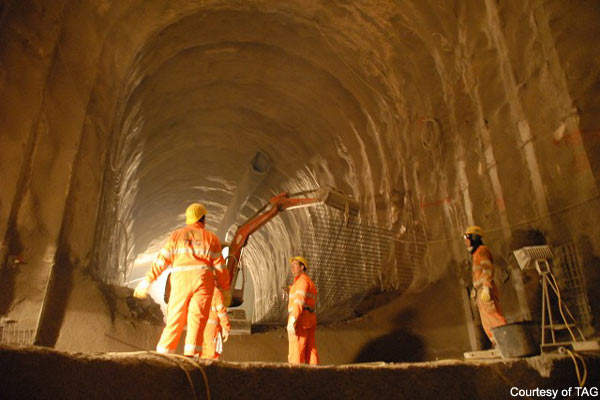 The Grouft Tunnel will be sealed with a membrane and finished with shotcrete. 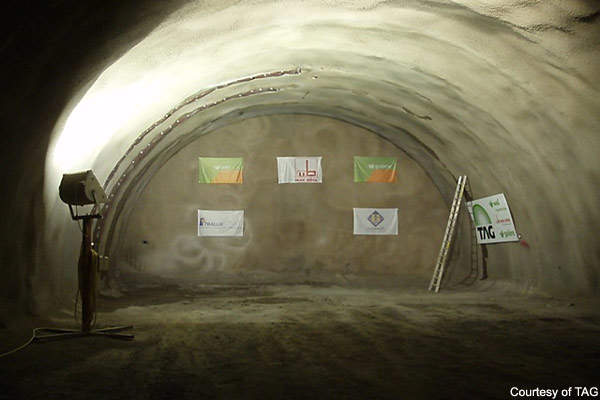 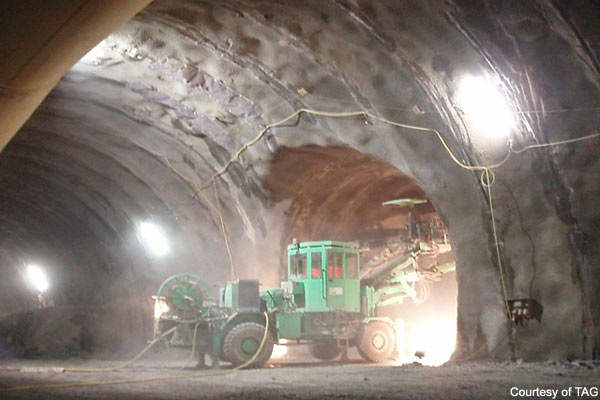 Work on the rescue tunnel. 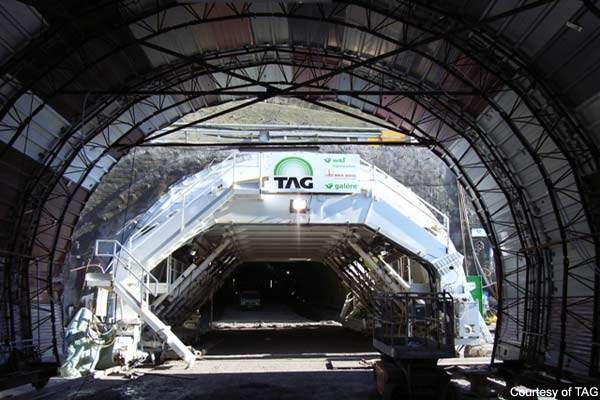 The downhill tunnel will have two lanes and the uphill tunnel three lanes. 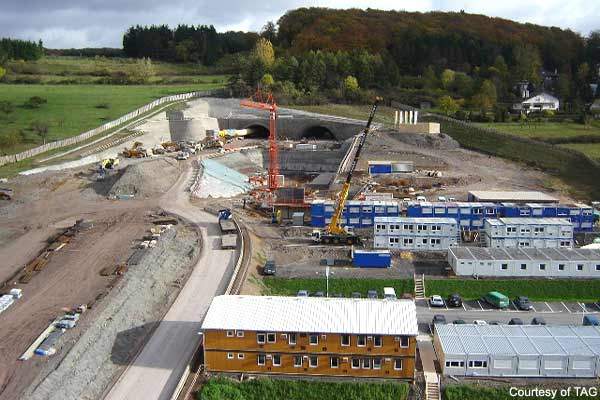 The north portal of the Grouft Tunnel.

The new Grouft Tunnel is one of the most ambitious road and tunnel projects undertaken to date in Luxembourg. The tunnel will form part of the ‘Route de Nord’ northbound motorway (Autoroute A7 [6.3km]) between Luxembourg City and Mersch. The tunnel is a parallel twin tube structure, which is around 2.966km in length It is scheduled to be complete by the end of 2009 or the beginning of 2010.

The cost of tunnel construction has been estimated at €171m. The tunnel will connect the Haeschtreferbierg Plateau in the south with the Alzette valley in the north; the tunnel is actually the middle one in a series of three consecutive tunnels on the route including the Gousselerbierg tunnel section (between Mersch and Lorentzweiler) and the Staffelter tunnel. The Grouft tunnel can only be opened when the works on the road sections between these two tunnels are complete, which is expected to be in 2012-13. The electro-mechanic equipment work of both tunnels will be undertaken at the same time.

The deepest section of the tunnel is 80m and the downhill tunnel will have two lanes (7m carriageway and an exit lane 150m from the end) while the uphill tunnel will have three lanes (10.5m carriageway – the third lane is for slow moving heavy goods vehicles). The owner of the tunnels will be the Grand Duché de Luxembourg (Grand Duchy of Luxembourg) and they will be administered by the Ministère des Travaux Publics and the Administration des Ponts et Chaussées (Luxembourg).

“Max Bögl Group Tunnel Construction Division was awarded a contract for the construction of the brickwork of the tunnel and was completed at the end of 2008.”

The tunnels were designed by Lombardi Engineering, Luxconsult and TR-Engineering. The construction has been carried out by a consortium consisting of Félix Giorgetti, Galère, Max Bögl, Tralux and Wayss & Freytag Ingenieurbau. The contract value of the project is €149m. The construction supervision is being carried out by GEOS and TR-Engineering. Health and safety during the project is the remit of Schroeder & Associés and Secolux. Max Bögl Group Tunnel Construction Division was awarded a contract for the construction of the brickwork of the tunnel and was completed at the end of 2008.
A 455m-long DN 1600 drainage tunnel was built by WÜWA Bau using a specially designed tunnel driving machine (VSM 1600). Wastewater pumps used in the construction were obtained from Tsurumi of Japan.

Excavation of the tunnel through the Rhetian stratum geology was undertaken using blasting and excavation equipment (685,000m³ of spoil removed). By December 2006 the first break though was achieved and by April 2007 the second tunnel broke through. The tunnel construction required 3,900 tons of arches and 85,000m³ of concrete, the inner shell is mainly unreinforced concrete (shotcrete 75,000m³) and includes a flexible membrane sealing system (190,000m²).

The twin tube parallel tunnels are connected by ten traverse links, one every 250m to enable movement from one tube to the other. Four of the ten escape routes are large enough to provide access for emergency and rescue vehicles.

A rescue tunnel has been constructed to intersect in the middle of the main tunnels because the topography of the site has allowed it to be only 100m long. The entrance was broken through in June 2007 and is 30m from road CR122 [Lorentzweiler to Blaschette]. The rescue tunnel then divides the Grouft tunnel into two halves so that it is quicker to reach safety from the middle.

The rescue access tunnel joins with the 30m G6 cross tunnel and also includes a 2.80m high duct ventilation system capable of the rapid removal of fumes (there is a lateral cavern to suck fumes into).

The central smoke removal system also includes fans installed in the main tunnels and two extractor fans in the upper part of the lateral cavern (fumes evacuated by a 4.5m diameter shaft, power 2 × 430kW, allowing ventilation flow of 270m³/sec). The diameter of the fan wheels is 2.50m (outer diameter of 2.80m), and the length of the fans is around 10m. The fan room is 22m by 6.50m high.