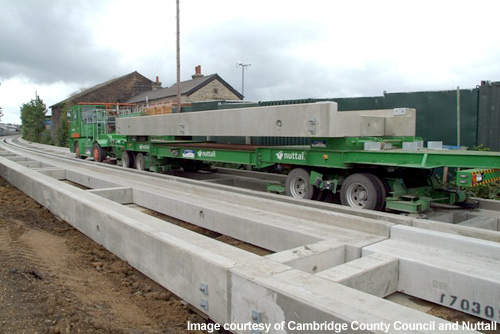 In order to provide enough pre-casting concrete for the Cambridgshre Guided Busway project, lead contractor Nuttall set up a pre-casting facility at Longstanton, halfway along the busway route. 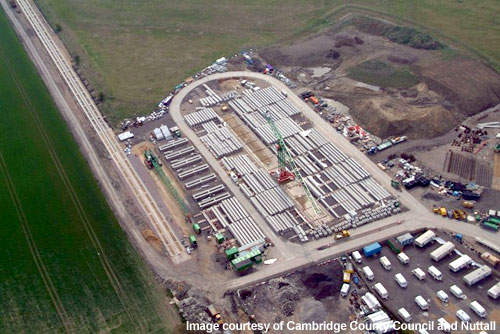 The Cambridgeshire Guided Busway route will have ten stops in total, four of which will be in Cambridge itself. 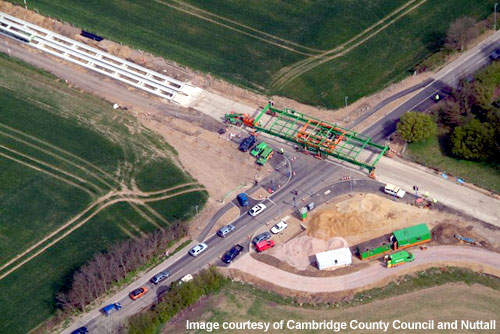 The Cambridgeshire Guided Busway will be the longest route of its type in the world. 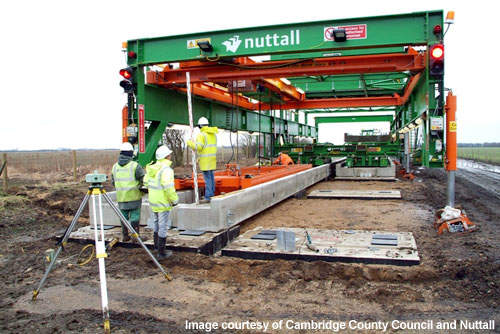 The Cambridgeshire Busway was expected to be complete by spring 2009 but flooding delayed this to 2011. 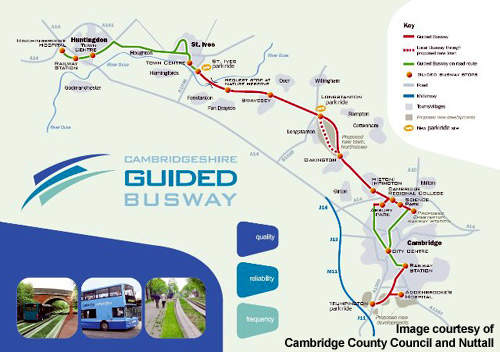 The Cambridgeshire Guided Busway project will help to relieve congestion on the A14. 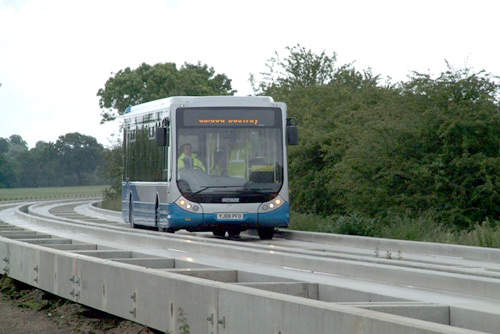 The Guided Busway solution was chosen because it cost around a fifth of a similar rail solution and offered larger passenger capacity.

The Cambridgeshire Guided Busway project is a new public transport scheme inaugurated in the UK in August 2011. The route runs from Cambridge to St Ives and on to Huntingdon, a distance of around 25km, making it the longest in the world. The busway also provides links to Cambridge for the new Northstowe housing project, which will see 9,500 houses built north of the city and effectively become a new town.

Construction of the project commenced in March 2007. By March 2008, 6.4km (4 miles) of the guided busway had been completed. The buses running on the route will be a special fleet but potentially any bus with guide wheels and steering modifications could be used.

Approximately 11,500 journeys per day are expected on the new busway.

The concept for the busway came from the Cambridge to Huntingdon Multi Modal Study (CHUMMS) undertaken in 2002–2003.

The bus solution was chosen as it was found to be around a fifth of the cost of constructing a similar light or heavy rail project and would also have a larger passenger capacity.

The guided busway system also requires less land with only enough hard surface for the wheels required and this also means that surface run-off and drainage is a smaller problem. It is expected that this project will eventually reduce traffic on the overcrowded A14 by 2.6%.

“The 25km Cambridgeshire Guided Busway route is the longest in the world.”

The new guided bus route will allow the buses to run in a concrete ‘guideway’ consisting of a running surface and a low upstand at speeds of around 60mph. There will be small guide wheels on the side of the buses, which will run along the inside of the upstand to keep the wheels within the guideway.

The surface of the guideway is critical as a smooth, rail-quality ride has been promised and to this end the constructed elements will be fabricated from pre-cast concrete.

The northern section of the busway extends for 20.6km on the route of the disused railway line between St Ives and Cambridge. The 4.5km southern section connects the railway station of Cambridge, Addenbrooke’s Hospital and a park at Trumpington.

The busway has ten stops in all – four in Cambridge itself, starting from two locations in the city centre. The southern section was to open in December 2010 but construction was delayed.

Tests were conducted on the newly added signals and traffic lights of the busway in December 2010.

The project was initially expected to be completed by 2009. Construction activities were, however, delayed due to floods. The project was finally handed over to the county council by its contractor in April 2011. Test drives were initiated on the busway in the July 2011 for a period of four weeks.

Cambridgeshire County Council is the controlling authority for the project. The winning bid for the contract to construct the busway came from Nuttall, with Parsons Brinckerhoff being appointed as designer. The company was involved in a similar project in Adelaide, Australia.

The contract for the project was awarded in 2005 and since that time Arup has joined the project as a consultant and designer. Atkins has also been involved in the project as the client’s (Cambridge CC) representative.

In June 2010, Nuttall was fined £6m by the Cambridgeshire County for the delay caused in completion of the project.

“Nuttal won the contract to construct the busway.”

The contractors agreed an £88m target cost for construction, out of a total project budget of £116.2m.

Two previous busways in Adelaide, Australia, and also at Essen in Germany have been constructed using precast concrete. Construction will require the casting of over 50,000m³ of concrete and to this end Nuttall has set up a pre-casting facility at Longstanton, halfway along the route.

The concrete itself has been designed in conjunction with the aggregate and concrete supplier Hanson, and aggregate will come from local quarries.

The guideway has been constructed of 2.6m-wide ‘ladders’, which have two 15m beams that are joined by three spacers. The beams are ‘L’ shaped, with a 350mm-thick slab and 180mm-high upstand.

“Construction will require the casting of over 50,000m³ of concrete.”

Approximately 24 beams are produced per day. Each of the elements is separately cast, and the ladders are then formed by bolting the different pieces together in the pre-casting yard before transporting it to the point of laying. The same moulds can be adjusted to produce radius curved elements for the guideway.

The final strength of the elements for the construction is 80N / mm².

This is reinforced with prefabricated cages of steel; 7,000t of steel will be used. The ground conditions for the busway are not good and so precast pad foundations as well as screw piles and precast pile caps are being used, since they can be adjusted to prevent the effects of ground settlement.