New bridge over the Mississippi River

The Highway 61 Hastings Bridge is a new tied-arch crossing for the Mississippi River in Minnesota, US. 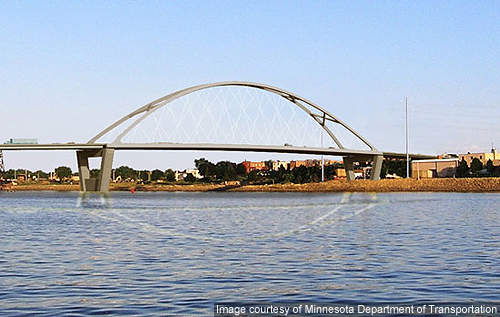 Highway 61 Hastings Bridge is a four-lane crossing with a lifespan of 100 years.

The new Highway 61 Hastings tied-arch bridge replaced the Hastings High Bridge, which was built in 1951.

Highway 61 Hastings Bridge is a new crossing project for the Mississippi River on the Highway 61 in Minnesota, US. The new tied-arch bridge replaced the age-old continuous steel high through-truss Hastings High Bridge that was built in 1951. The old bridge served an average of 32,000 vehicles a day.

In June 2010, the Minnesota Department of Transportation (Mn/DoT) selected a joint venture of Lunda Construction and Ames Construction as the preferred contractor for their best-value proposal to design and build the New Hastings Bridge.

Mn/DoT estimated the project cost to be roughly $225m, while the bid by the JV was $120m; $100m less than the expected cost. The total investment on the project, however, reached $130m.

The final contract for the bridge construction was awarded on 30 June 2010. Construction of the Highway 61 Hastings Bridge began in October 2010 and a portion of the bridge was opened to two-lane traffic in June 2013. All four lanes were opened to traffic on 15 November 2013.

The old Hastings High Bridge was a two-lane bridge connecting Highway 61 on the north of the Mississippi River with downtown Hastings. It had a main river span of 514ft and a structural length of 1,857ft, with a total of three main and ten approach spans.

“Highway 61 Hastings Bridge is a new crossing project for the Mississippi River on the Highway 61 in Minnesota, US.”

The bridge was scheduled to be torn down and replaced by a new bridge upstream of the existing bridge in 2019, but the collapse of I-35W bridge in Minneapolis in August 2007 necessitated the inspection of Hastings High Bridge, which raised issues about its sustainability. An environmental review was undertaken to study alternatives for the new bridge.

The Highway 61 Hastings Bridge Project received the 2008 transportation funding package and a travel modelling report of March 2008 showed a requirement for a four-lane bridge with two traffic lanes in each direction. It also defined construction to be carried out without long-term closure of the Hastings High Bridge.

In December 2008, a bridge scoping study was conducted for feasibility of four new bridge types with an option for rehabilitation of the existing bridge.

The rehabilitation alternative lacked community support due to its long construction time and cost. Mn/DoT estimated the Highway 61 Hastings Bridge to cost $225m-$265m for the design, construction, right of way and other requirements.

The two distinct bridges were an arch bridge with a basket handle design and a cable suspension bridge. Request for proposals (RFP) for one of the two Hastings Bridge designs was called in January 2010.

The RFP outlined the roadway, structural, steel and concrete requirements with a budget of $220m.

Three joint firms were shortlisted to submit proposals for construction of the new bridge under the two bridge alternatives, cable and arch.

“Construction of the Highway 61 Hastings Bridge began in October 2010.”

The cable bridge alternative would have been a complex cable-stayed bridge supported by a 200ft tall tower.

The bridge was designed to be distinctive the earlier bridge types on the river crossing. The selected tied-arch bridge alternative is similar in size and shape to the existing bridge. The arch was constructed off-site and ferried to the project site before being lifted onto new piers.

Highway 61 Hastings Bridge is a four-lane span with two southbound and two northbound lanes. The arch bridge also has a 12ft bicycle and pedestrian trial separated by a barrier. The bridge has a river navigational channel opening and an anti-icing system on the driving surface. It is designed to have a lifespan of 100 years.

A construction staging area was built near lock and dam two to facilitate the bridge project. A service road was also constructed on the north side of the proposed bridge for safer travel on the TH 61 along with a local ring road for linking the east and west sides of Highway 61.

Hastings Bridge was constructed with a minimum closure of the roads to avoid impact to traffic on the bridge.