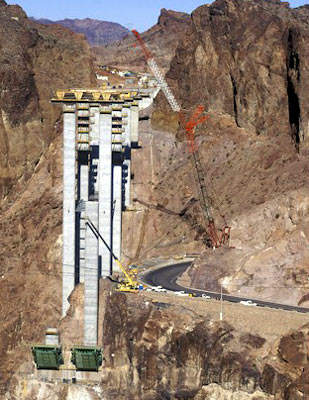 The top of the Hoover Dam is the route of the major road US 93 as it crosses the Colorado River. The route of the road had to be changed and an alternate crossing of the river developed. 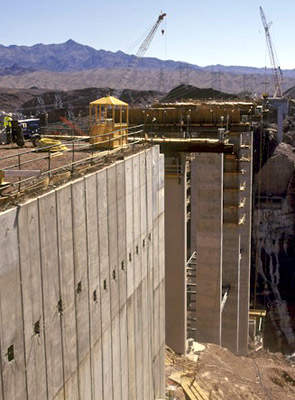 The new Hoover Dam Bypass will include approximately 3.5 miles of new four-lane highway and a 1,900ft-long bridge over the Colorado River. 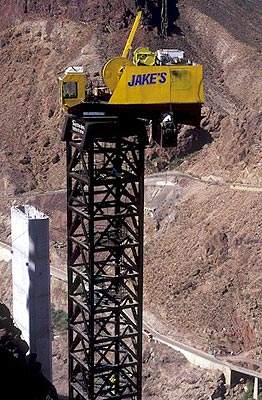 In September 2006 construction on the Hoover Dam Bypass project was delayed, as the temporary highline crane system collapsed during a storm. 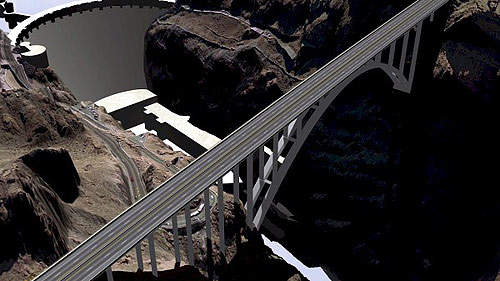 The new bridge will span the Black Canyon (about 1,600ft south of the Hoover Dam), connecting the Arizona and Nevada Approach highways nearly 900ft above the Colorado River. 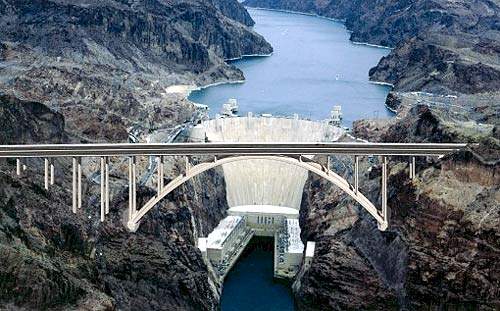 The new Colorado River bridge next to the Hoover Dam. 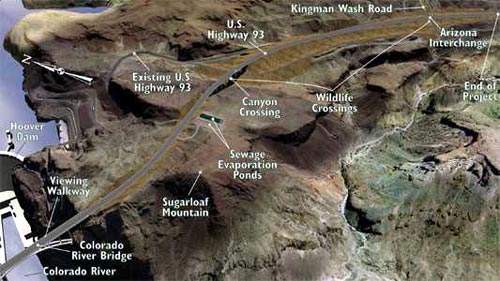 Features of the Hoover Dam Bypass project in detail.

The top of the Hoover Dam is the route of the major road US 93 as it crosses the Colorado River. US route 93 is the major commercial corridor between the states of Arizona, Nevada and Utah; it is also on the North American Free Trade Agreement (NAFTA) route between Mexico and Canada.

The road was identified as a major problem in the US highway system because of the traffic congestion caused by the inadequacy of the existing highway across the dam.

Design for the project was carried out by HDR, Sverdrup Civil and TY Lin International. Environmental impact studies were carried out by CH2M HILL. The Federal Highway Administration had received Federal and State (Nevada and Arizona) money to complete the design and construction of the project.

“In addition, the bypass underwent final surfacing and was provided with striping, signing, barrier, and pedestrian facilities.”

The final works to open the bypass included construction of short sections of remaining roadway that linked the River Bridge and the US 93.The final roadway surfacing cost $10m.

The twin-rib arch of the Colorado River Bridge was completed in August 2009 and the bridge columns were constructed in November 2009. Construction of the entire bypass was completed in September 2010. The bypass opened to traffic a month later in October 2010.

By August 2009, the arch’s final sections were connected and the project was 85% complete. The entire bypass is expected to be completed by August 2010 and be open to traffic in November 2010.

The route of the road had to be changed and an alternate crossing of the river was developed near the Hoover Dam. This new route eliminates the problems with the existing roadway – sharp turns, narrow roadways, inadequate shoulders, poor sight distance and low travel speeds.

The roadway is the primary route for commerce and travel between Phoenix and Las Vegas, with more than 17,000 vehicles using the highway each day. The accident rate in the bypass area is three times higher than the rest of US 93. The new Hoover Dam Bypass includes approximately 3.5 miles of new four-lane highway and a 1,900ft-long bridge over the Colorado River about 1,500ft south of the dam, which ties into existing US 93 on the east and west.

In September 2006 the temporary highline crane system collapsed during a storm and was not back in action until January 2008. This delayed the bridge portion of the bypass project for two years.

In February 2007, additional interim heavy cranes became fully operational, which allowed significant production work to proceed in full force. This effort mitigated the impacts of the lost highline until the tower cranes were re-established.

Meanwhile progress continued in the precast yard where crews worked to construct the precast segments of the bridge columns and the cast-in-place arch.

The Western Area Power Administration (WAPA), a partner with the Federal Highway Administration on the bypass completed changes to its transmission system, necessary to accommodate the bypass project in June 2004.

These improvements were made in two phases and included replacing transmission towers and conductor that were installed in the late 1930s and removing a switchyard with 50-year-old breakers and switches. These state-of-the-art improvements enhanced the overall reliability for electrical customers.

Phase One of the bypass, the Sugarloaf Mountain Bridge, signified the end of construction on the Arizona Approach. The project involved building a connection between US 93 and the Colorado River Bridge. Major components of the $21.5m project include nearly two miles of four-lane roadway, a 900ft bridge on the east side of Sugarloaf Mountain, a new traffic interchange at US 93 and Kingman Wash Road, wildlife crossings, trail access parking, improved drainage and rock staining.

The joint venture contractor, RE Monks Construction and Vastco Inc, were responsible for construction activities on the Arizona Approach. The project was completed on time by 2004.

Phase two of the bypass, the Nevada Approach, was awarded to Edward Kraemer & Sons Inc. This $30.1m roadway improvement project running from Nevada US 93 to the new Colorado River Bridge crossing was completed nearly two months ahead of schedule in November 2005 (construction of this had started in October 2003).

The contractor constructed 2.11 miles of new four-lane highway alignment including six new bridges, a new traffic interchange at US 93 near the Hacienda Casino, retaining walls, wildlife crossings, and a 1.6-mile extension of the River Mountain River Loop hiking trail. To accomplish this feat, the contractor moved over 1.5 million square yards of blasted rock material, placed 2.8 million pounds of reinforcing steel, and poured over 12,000yd³ of structural concrete.

A $7m contract was awarded to Frehner Construction Company of North Las Vegas by the Federal Highway Administration for completion of the final roadway elements.

The highline system formed a critical part of the contractors’ operations because it allowed materials to be delivered out over the canyon while work continued on the 1,900ft-long Colorado River Bridge. Two tower cranes were built on opposite sides of the canyon, forming dual highlines. When the highlines were erected, the entire length of the bridge became accessible to the crane hook for delivery of materials used in both foundation structures and the main arch crossing.

The bridge portion of the Hoover Dam Bypass project was delayed significantly when the two highline tower cranes toppled unexpectedly in 2006. They were redesigned and rebuilt before final construction of the arch portion of the bridge proceeded.