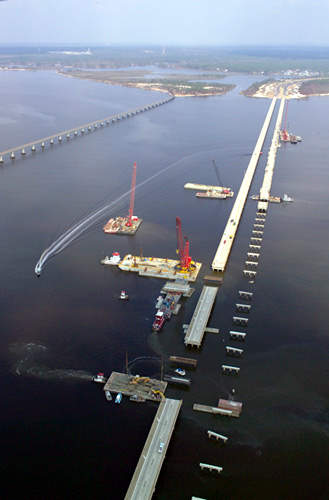 The I-10 Bridge project over Escambia Bay near Pensacola has replaced the temporary steel bridges with two new, three-lane bridges at a cost of &#36;243m. 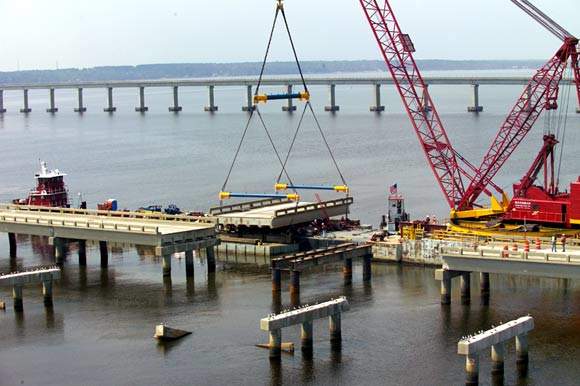 Each bridge consists of three 12ft travel lanes and 10ft inside and outside shoulders. The I-10 eastbound on-ramp and the I-10 westbound off-ramp at Scenic Highway has also been strengthened. 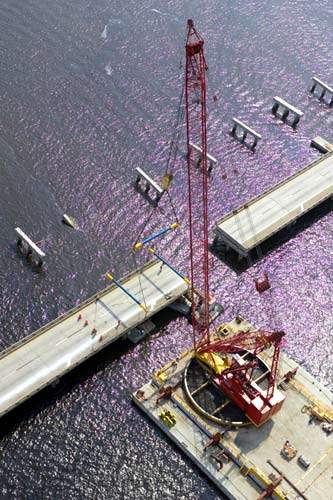 The minimum clearance over water on the new bridges is 25ft, whereas the clearance of the previous bridge was less than 12ft.

The I-10 Bridge project over Escambia Bay east of Pensacola was undertaken by the Florida Department of Transportation (FDOT) to replace a temporary, steel-panel bridge system that was installed after the Hurricane Ivan caused severe damage to the eastbound I-10 Bridge in September 2004. GM Construction Inc was involved in temporary remedial work.

The temporary steel-panel bridge system was able to cater to the high volumes of traffic on the Bay connecting Escambia and Santa Rosa counties, but needed replacement with a permanent solution.

The FDOT has now replaced the existing bridges with two new, three-lane bridges at a cost of $243m. The project began in April 2005 and was structurally complete by autumn 2007. The westbound bridge was opened in December 2007 and the eastbound bridge had already been opened by December 2006.

“The life span of the new bridges has been fixed at 75 years.”

The Escambia bridges have been renamed as David Bogan Bridge after a resident of Pensacola who worked as project manager on the bridge construction project and died during the construction.

The temporary panel bridge system was supplied by Acrow Corporation and installed to ensure the continuation of service for the estimated 42,000 vehicles passing the bridge daily. The safety of the temporary bridge continued to pass all inspections but it was of significant public concern that FDOT moved quickly to ensure a permanent replacement.

FDOT conducted detailed engineering and environmental surveys and awarded Parsons Brinckerhoff as the official designer of the bridge replacement project. The construction contract went to Tidewater Skanska and Flatiron Constructors, a design-build firm.

The new bridges are each approximately 2.6 miles long. Each bridge consists of three 12ft travel lanes and 10ft inside and outside shoulders. The I-10 eastbound on-ramp and the I-10 westbound off-ramp at Scenic Highway will also be strengthened. The minimum clearance over water on the new bridges is 25ft while the clearance of the existing bridge was less than 12ft. The life span of the new bridges has been fixed at 75 years.

The construction of the new bridge began at the southern point of the existing bridge. The three-lane eastbound bridge was completed first. The eastbound bridge and Scenic Highway ramps was open for traffic from October 2006 and the westbound traffic was diverted along the eastbound bridge three months later on a temporary basis.

The work on the new westbound bridge was completed by November 2007. Although both bridges were opened, construction work continued until April 2008 on items such as lighting and also demolition work continued on the old bridge structures. There were some resettlement problems with some of the piles in the new westbound bridge but these problems have been inspected and rectified.

The FDOT executed the project in four phases. In the first phase, most existing traffic conditions were maintained from April 2005 to October 2006, with one eastbound lane and two westbound lanes. The eastbound scenic highway ramp was however closed. The new eastbound bridge began construction during this phase.

In the second phase, the pre-hurricane traffic capacity of I-10 was restored by providing two eastbound on the new bridge and two westbound lanes on the existing temporary bridge. The eastbound and westbound ramps of the Scenic Highway were also open for traffic. This phase covered the period between October 2006 and December 2006, when construction of the westbound bridge began.

In the third phase that lasted from January 2007 to July 2007, all traffic was moved to the new eastbound bridge with two lanes in each direction. Both ramps were open.

The final phase of the I-10 project was executed in July 2007 and effectively made both the new eastbound and westbound bridges fully operational.

The pile driving operations continued at night until February 2006 and then again from October to November 2006. Concrete work was done at night throughout the project period to limit disruption and allow work to continue unrestricted at times of low traffic flow.

The Florida Department of Transportation (FDOT) is the owner and sponsor of the project. The design-build contract was awarded to Tidewater Skanska and Flatiron Constructors (TSFC), a joint venture that worked with the design firm Parsons Brinckerhoff Quade and Douglas (PGQD) to rebuild the bridges.

“The FDOT has now replaced the existing bridges with two new, three-lane bridges at a cost of $243m.”

Tidewater Skanska is a Virginia-based subsidiary of Skanska USA Civil, one of the largest construction firms in the United States. Flatiron Constructors is a Longmont-based construction company that is involved in the execution of major bridge, highway and other transportation projects in the US. Parsons Brinckerhoff Quade is a famous design firm offering solutions for a wide range of activities including planning, engineering, programme and construction management and operation management.

TSFC won an award in 2007 for its quick work to construct the two new I-10 bridges. The construction joint venture also won a Gulf Guardian Award from the Gulf of Mexico Program Partnership of the United States Environmental Protection Agency (USEPA).

The total value of the contract was $243m, out of which Skanska’s portion was 60% and Flatiron Constructors’ share was 40%.