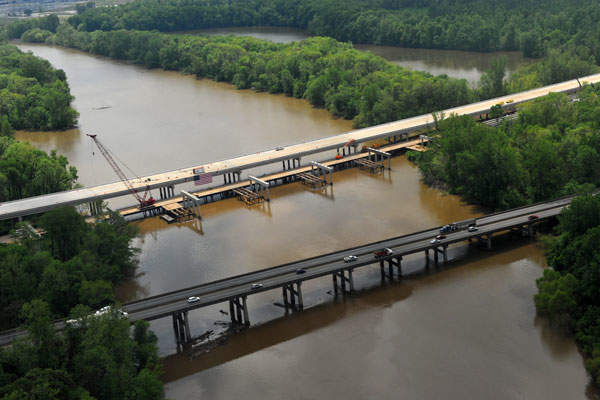 The new replaced bridge over the Yadkin River. Image courtesy of NCDOT communications.

North Carolina Department of Transportation has made improvements to Interstate-85 between Davidson and Rowan counties of North Carolina, US, as part of the I-85 Corridor Improvement Project.

The project included upgrades to the highway, bridge and rail infrastructure along I-85. It is expected to benefit more than 60,000 vehicles that drive daily on the interstate highway. The traffic is expected to increase to 112,000 vehicles a day by 2025.

I-85 is the most direct and busiest route between Richmond and Atlanta and plays an important role in regional, state-wide and interstate mobility. The interstate is a part of the north-south corridor and provides strategic connections to a number of interstate routes such as the I-95, I-77 and I-26.

“The construction works began in October 2010 and were completed in September 2013.”

The first phase upgraded a seven-mile segment of the I-85 in Davidson and Rowan Counties. It involved the replacement of eight bridges, including the US29/70 bridge over the Yadkin River. A total of 2,700ft-long dual four-lane structures replaced the two-lane bridge, which is also designed in accordance with the 70mph speed standards for a rolling urban freeway and an interstate highway.

The parallel bridges that cross over the North Carolina railroad tracks and the Duke Power Industrial Rail Spur were also replaced as part of the project. The renovated parallel bridges has provided room for future rail improvements, including the required alignment to implement high-speed rail and the addition of new freight tracks.

Under the second phase of the project, the northern segment of the I-85 was widened to a length of 3.8 miles. The segment was converted into eight-lane road (four lanes in each direction) from the north of NC 150 to the north of I-85 Business in Davidson County. The I-85 interchange at Belmont Road was also reconstructed under this phase.

Construction of the I-85 Corridor improvements

Major construction works on the southern segment included the road widening from four to eight lanes, roadway realignment to eliminate sharp curves and improving the interchange to NC-150.

The widening of the northern segment into eight lanes was carried out in two phases. The first phase included the construction of the outer lanes first so that the traffic could be diverted while constructing the inner lanes.

Temporary ramps from the Clark Road Bridge and the Belmont Road Bridge onto the I-85 median were built to facilitate the construction of the new inside lanes. Trucks used these ramps instead of accessing the I-85, thereby eliminating 13,000 truckloads from the interstate.

The Belmont Road interchange was completely reconstructed and the Clark Road Bridge was removed.

Contractors involved in the I-85 Corridor project

The joint venture of Balfour Beatty Infrastructure and Austin Bridge & Road was awarded a $65.5m contract for the construction of the northern segment of the I-85 improvement project.

A contract worth $136m for the construction of the I-85 southern segment was awarded to the joint venture of Lane Construction and Flatiron Construction.